Hope and Revolution in the Age of Duterte

In these times of economic crisis, escalating war and rising fascism, we can all find hope in revolutionary struggle. 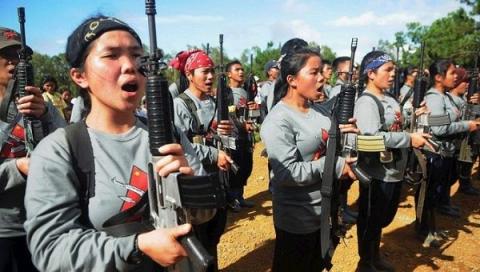 Since Philippine President Rodrigo Roa Duterte declared Martial Law in the island of Mindanao in the Southern Philippines last May, there have been non-stop protests in the country to denounce the return of another declared fascist dictatorship.

When people think of the Philippines nowadays, Duterte, his foul mouth, his sexism, and his infamous drug war are likely the first things that come to mind. This is thanks to the fact that the international media has relentlessly shone a bright spotlight on these for over a year.

But what the international media has left out completely is the most politically significant and decisive aspect of Philippine society in these perilous times of rising fascism and militarism — the Philippine Revolutionary Movement and the emerging Provisional Revolutionary Government. This burgeoning power is now present in 71 out of 81 provinces in the country on the barrio and municipality levels, born out of the Communist Party of the Philippines (CPP’s) 50-year old armed revolution that rose and grew in the midst of U.S.-backed fascist dictatorship.

Ironically, when Duterte was mayor of Davao City for 22 years, he not only spoke highly of the revolutionary movement, but allied himself with it on issues such as denouncing U.S.-CIA operations, U.S. military intervention, and ensuring subsidies and food relief for poor peasants and farmers in a country where over 75 percent of the Filipino population live off rich agricultural lands yet experience severe food scarcity and hunger when forced to yield to big foreign corporate agribusiness and mining corporations.

Now as President of the Philippines, Duterte has changed his tune. His pronouncements sound more like that of the U.S. State Department, which tags the leaders of Philippine revolutionary movement — the CPP and the New People’s Army (NPA) — as terrorists. It is important to place this in the context of U.S.-Philippine historical relations, which began in 1899 with the U.S. invasion of the Philippines, the first U.S. war of aggression and conquest far overseas that led to the establishment of the Philippines as a U.S. colony from 1899-1946.  From 1946 until the present, the Philippines remains a U.S. neo-colony, or having the semblance of independence but still heavily influenced by U.S. foreign policy in the economic, political, and cultural spheres.

Let’s not forget Duterte’s scrapping of the highly-lauded resumed peace negotiations with the National Democratic Front of the Philippines (NDFP), which sought to address the roots of the nearly 50-year old civil war raging in the Philippine countryside; welcoming US$32 million in US aid in its war against the poor-cum-suppression campaign tagged as a War on Drugs, as well as adding more US Special Operation Forces and US drone operations in its war against the Moro people (Islamized indigenous), government critics, and human rights activists, tagged as a War on Terror.

Neither the U.S. government, nor any Philippine president, has ever been able to fully annihilate the CPP-NPA-NDF or the shadow provisional government it has established in the countryside. And if history is any indicator, U.S.-backed martial law and heightened state repression in the country will only drive the poor rural majority and working poor in the cities to join its ranks by the tens of thousands.

Perhaps it’s because in the guerilla bases of these so-called terrorists you will find free healthcare, education, and farm cooperatives that produce food to sustain communities. Maybe it’s because the NPA is known to be a first responder to disaster-struck areas with their relief missions when hurricanes hit. Or maybe because the guerillas, with mass support, find ways to deter and avert private armies of the foreign corporations as well as Philippine military from occupying mineral-rich areas on which a vast number of indigenous people live. Or maybe it’s the fact that the most marginalized people just feel safer and provided for in these areas.

Whatever it is, the U.S. government wants to kill this movement, and is funneling tens of millions in U.S. tax dollars to the Duterte government to get the job done.

A new documentary project, Moving the Mountains, is currently underway to challenge the mainstream narrative of misinformation by examining the history as well as continuing relevance of the Philippine revolution from the stories of its aging founders and the young Filipinos who continue to take up arms in the countryside. The filmmakers, three young Filipino-American grassroots activists, are currently fundraising to shoot more footage in the Philippines and complete by next year.

Watch the trailer and learn how to donate online at bit.ly/mtmdonate.

In these times of economic crisis, escalating war and rising fascism in the Philippines, U.S. and around the world, perhaps we can all find hope in revolutionary struggle.

Bernadette Ellorin is the Chairperson of BAYAN USA and a member of the International Coordinating Committee of the International League of Peoples Struggle (ILPS). She is also one of the members of the filmmaking team behind the upcoming documentary film, “Moving the Mountains.”