Here are two articles about the Wall. An Israeli arms maker has been picked by the US Department of Homeland Security to build a prototype of the wall President Donald Trump has vowed to build along the full length of the US-Mexico border. After delays — due in part to contractor battles — preliminary work on construction has begun in California, New Mexico, Arizona and Texas, leading to concerns ranging from states’ rights to environmental destruction. 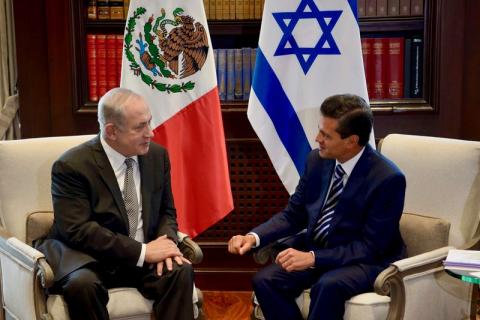 Trump now says his wall will be “see through,” suggesting an emphasis on fences and electronic monitoring, rather than concrete.

Construction of the prototypes is expected to begin this fall near San Diego.

The company is the Maryland-based subsidiary of Elta Systems Ltd., which is owned by one of Israel’s leading arms companies, Israel Aerospace Industries.

Elta is not the only Israeli firm that pitched itself to build Trump’s wall. Magal Security Systems, a company that has helped Israel isolate Gaza from the outside world, earlier expressed its interest in winning the contract.

While Trump has not yet secured the billions of dollars from Congress that it would take to complete such a project, he has expressed admiration for Israel’s walling and fencing of Palestinians as a model.

Previously, Israeli arms maker Elbit Systems was awarded a $145-million contract by the Obama administration for surveillance equipment along the US-Mexico frontier.

US front for Israeli firm

By forming a subsidiary in the United States, Elta is able to effectively get around requirements that billions of dollars in US military aid to Israel be spent with US firms.

As the Israeli newspaper Haaretz explains, Elta North America “provides radar components for the Israeli military, which purchases them using US military aid, which must be spent in the United States.”

It is also able to sell directly to the US military and other government agencies.

Elta markets itself as part of the burgeoning American “homeland security” industry.

Elta will be represented at next month’s International Association of Chiefs of Police convention in Philadelphia, and along with other Israeli arms firms will be at next year’s Border Security Expo in Texas.

The burgeoning relationship between US militarized policing and Israel’s military-industrial complex is the focus of the new activist campaign Deadly Exchange, that seeks to end such ties.

Israeli activists have also tried to stop firms including Elta and Israel Aerospace Industries from selling weapons to the military regime in Myanmar.

According to Human Rights Watch, the Myanmar military is carrying out crimes against humanity, including forced deportation, murder, rape and persecution against Rohingya Muslims in the country’s Rakhine State.

In 2015, Myanmar’s military leader visited Israel Aerospace Industries and Elta as part of an arms shopping tour in Israel.

Israeli arms companies have sold weapons into regions where bloody wars and genocides have taken place, including Rwanda and South Sudan.

Mexico expressed its outrage in January when Israeli Prime Minister Benjamin Netanyahu endorsed Trump’s plan for a wall on the US-Mexico border.

Under domestic pressure, Mexico’s Cemex announced earlier this year that it wouldn’t take part in building the wall. Ironically, the construction materials conglomerate remains complicit in Israel’s occupation and illegal colonization of the West Bank.

Netanyahu undoubtedly had Israel’s ideological and commercial interests in mind when he endorsed Trump’s wall.

But President Enrique Peña Nieto appears to have gotten over any anger, giving Netanyahu a warm welcome in Mexico City earlier this month.

Peña Nieto said his country would seek closer cooperation with Israel, including on “cybersecurity.”

The Mexican president did not say if that meant his government would be seeking to buy more of the Israeli malware that has been used in efforts to intimidate and spy on Mexican journalists and human rights defenders.

Legal or Not, Trump’s Wall Is Already Being Built

On January 25, 2017, five days after being sworn into office, President Donald Trump signed an executive order authorizing the immediate construction of a physical wall on the southern border of the United States. After delays — due in part to contractor battles — preliminary work on construction has begun in California, New Mexico, Arizona and Texas, leading to concerns ranging from states’ rights to environmental destruction.

Where is the construction happening?

As of this writing, the Department of Homeland Security has started border wall projects or is planning to start projects in these locations: the Rio Grande Valley, Texas; El Paso, Texas; Sunland Park, New Mexico; Naco, Arizona; Imperial County, California; and San Diego County, California. Although Trump campaigned on building a wall along the entire border, approximately 2,000 miles, he recently told reporters that 700 miles might suffice. Contractors’ bids, selected earlier this year, were required to describe walls from 18 to 30 feet in height that were aesthetically pleasing on their northern side and would take at least an hour to penetrate with “sledgehammer, car jack, pick axe, chisel, battery operated impact tools, battery operated cutting tools, Oxy/acetylene torch or other similar hand-held tools.” The government has awarded bids for two types of wall: one of concrete, another of materials other than concrete.

In every location, DHS is building on federally protected lands. This has set off alarms for conservation organizations, which worry that irreparable damage may be done to the country’s natural resources. The Santa Ana National Wildlife Refuge, for example, is known as the “jewel of the National Wildlife Refuge System” because of the incredible diversity of birds that it harbors.

The refuge’s privately owned neighbor, the nonprofit National Butterfly Center, found itself in the crosshairs this past summer. The center sits on a former onion farm: land that it rehabilitated by planting native species that attract butterflies from throughout the continent during their migrations. In July, the center’s executive director, Marianna Tevino Wright, discovered that Customs and Border Protection had cleared a significant portion of the property and begun preliminary surveys for border wall construction. According to Wright, if a border wall is constructed as indicated, the organization will lose approximately two thirds of its property.

Why are we building a southern border wall?

Trump’s executive order cites a “recent surge” in undocumented immigrants through the southern border to justify the construction of a border wall. In fact, according to Customs and Border Protection data, apprehensions of undocumented immigrants at the U.S.-Mexico border have fallen in the past decade to approximately 400,000, a low not seen since the 1970s.

Nonetheless, under the executive order, federal prosecutors are to give higher priority to cases that involve the southern border. Additionally, the Secretary of Homeland Security is instructed to issue monthly, reader-friendly reports for the public accounting for all undocumented immigrants apprehended at the U.S.-Mexico border. This focus on visibility suggests that fulfilling a campaign promise is part of the president’s motivation.

How much will construction cost?

According to a Congressional Budget Office report, the border fencing built during the mid-2000s cost up to $3.9 million per mile, totaling $823.5 million spent on 288 miles of fencing.

It’s hard to accurately estimate the cost of constructing the wall the president has ordered. Many regions that do not yet have any kind of barrier are the places where construction would be hardest to do — such as mountainous terrain. One research firm suggested that the total price tag could range from $15 to 20 billion, according to the Washington Post.

What will the environmental impacts of construction be?

According to the Center for Biological Diversity, the border wall and the activities that would go with it — mainly associated road construction — would threaten vulnerable wildlife. The CBD estimates impacts to at least 93 species that are threatened, endangered, or candidates for listing by the U.S. Fish and Wildlife Service, ranging from jaguars to Sonora tiger salamanders to a rare kind of bighorn sheep.

We may never know the full extent of the wall’s environmental impacts. Trump’s executive order stresses immediate border wall planning, design and construction, explicitly by waiving federal regulations. To that end, among the many laws waived by former DHS Secretary John Kelly — in some cases, more than thirty laws — include NEPA, the Endangered Species Act, the Migratory Bird Treaty Act, and the Clean Water Act: regulations that enforce accountability and awareness for the American public. Without having to perform environmental impact reviews before initiating construction, DHS will not have a record of what it’s erasing from the landscape.

Interestingly, some of the laws listed for wall construction near San Diego — ranging from the Native American Graves Protection and Repatriation Act to the Wilderness Act — don’t seem to apply to that location. The list as a whole may hint at the regulatory snafus the agency hopes to avoid down the line at other wall locations.

In his executive order, Trump cites several laws authorizing his order of the construction. The one that comes up the most in discussions of the legality of this executive order is the Illegal Immigration Reform and Immigrant Responsibility Act of 1996.

The lawsuit filed this week by California’s Attorney General, Xavier Becerra, disputes the legality of the executive order. Perhaps taking a page from the playbook of other Western states, California focuses partly on states’ rights. By waiving the Coastal Zone Management Act, which gives California broad powers to regulate how federal projects affect its coastal ecosystems, the state claims that the federal government is interfering with California’s sovereign authority.

Hillary Hoffmann, an environmental law professor at the Vermont Law School, explains that part of California’s lawsuit rests on the belief that the president is upsetting the country’s system of checks and balances. Federal laws trump state laws, but Congress can’t essentially tell agents of the federal government that state laws don’t apply to them without passing corresponding laws. This part of California’s lawsuit could be precedent setting if it goes to the Supreme Court, as it deals with interpreting the Constitution.

In any case, plaintiffs in this lawsuit and other border wall lawsuits argue, the IIRIRA doesn’t apply to Trump or his DHS Secretary. The law applied only to border fencing projects for a very specific period of time, ending in 2008. If the court agrees, then DHS will not be able to waive environmental laws in building walls.

Hoffmann points out that in matters of national security, the courts generally defer to the DHS. For that reason — regardless of where the merits of the case lie — plaintiffs will have a steep hill to climb in challenging border wall construction.

It’s complicated, and the financial, environmental, and legal — not to mention humanitarian — stakes are high. At the very least, the suits ask for preliminary injunctions. If granted, the related border wall construction will halt as these issues are sorted out.