The president may be key to the quarterback winning his collusion grievance. 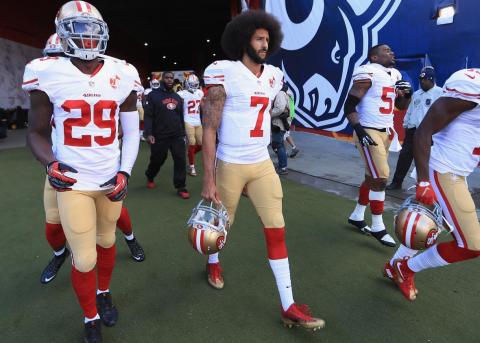 Colin Kaepernick’s accusation that NFL owners have colluded to keep him out of the league feels true. As more starting NFL quarterbacks get hurt and more obviously inferior quarterbacks get jobs that might have gone to the former San Francisco 49ers QB, the evidence seems clearer and clearer that he is being blackballed. But to win the grievance he filed against the league on Sunday, Kaepernick must prove collusion has taken place. Per the league’s collective bargaining agreement, he needs to demonstrate that two or more NFL teams, or one or more team and the NFL itself, acted in concert through an “express or implied” agreement to limit his employment options.

Kaepernick’s legal team will try to clear that bar by pointing at the Oval Office. Their argument, essentially, is that the president served as a go-between in pushing owners to agree to blackball the quarterback for instigating a league-wide protest movement. Consider this passage from Kaepernick’s confidential grievance letter, which was made public by ABC News:

The owners … have been quoted describing their communications with President Trump, who has been an organizing force in the collusion among team owners in their conduct towards Mr. Kaepernick and other NFL players. Owners have described the Trump Administration as causing paradigm shifts in their views toward NFL players.

What evidence might Kaepernick draw on to make the case that Trump abetted a league-wide collusive effort?

Some of Trump’s communications with NFL owners are a matter of public record. On March 19, he hosted New England Patriots owner Robert Kraft on Air Force One. One day later, the president told supporters at a rally in Louisville, Kentucky: “It was reported that NFL owners don’t want to pick [Kaepernick] up because they don’t want to get a nasty tweet from Donald Trump. Do you believe that?”

The article Trump seemed to cite in that Louisville speech—a Bleacher Reportpiece by Mike Freeman—quoted an unnamed general manager who analyzed why no NFL team had signed Kaepernick. Here is that quote:

First, some teams genuinely believe that he can’t play. They think he’s shot. I’d put that number around 20 percent.
Second, some teams fear the backlash from fans after getting him. They think there might be protests or [President Donald] Trump will tweet about the team. I’d say that number is around 10 percent. Then there’s another 10 percent that has a mix of those feelings.
Third, the rest genuinely hate him and can’t stand what he did [kneeling for the national anthem]. They want nothing to do with him. They won’t move on.

The implication there is that the president had helped persuade 10 to 20 percent of the league—three to six teams—not to sign Kaepernick. The quote also suggests that the general manager had discussed Kaepernick’s employment status with officials from other teams. “[Some teams] think showing no interest is a form of punishment,” the team official said. “I think some teams also want to use Kaepernick as a cautionary tale to stop other players in the future from doing what he did.” If it can be proved that any opposing team officials openly or implicitly discussed retaliating against Kaepernick in this way, that certainly sounds like good evidence of collusion.

Trump has also had the ear of one of the NFL’s other most influential owners: Jerry Jones of the Dallas Cowboys. Last month, the president tweeted about a conversation he’d had with Jones:

Shortly after that, Jones said he would bench any player who demonstrated during the national anthem and stated that Trump had reminded him about an NFL policy that encouraged players to stand during the anthem.

In addition, ESPN reported that on the same day Jones spoke with Trump, 25 NFL owners convened at league headquarters to discuss the protests Kaepernick had helped spark. According to ESPN, Jones told his fellow owners that if players were allowed to keep protesting, then Trump would continue to punish the NFL:

In the meeting, many owners wanted to speak, but the discussion soon was “hijacked,” in the words of one owner, by Jones, a $1 million contributor to Trump’s inaugural committee fund. … The blunt Hall of Famer mentioned that he had spoken by phone, more than once over the past 24 hours, with Trump. Jones said the president, who only a few years ago tried to buy the Buffalo Bills, had no intention of backing down from his criticism of the NFL and its players. Jones—who a day earlier for Monday Night Football in Arizona had orchestrated a team-wide kneeling before the anthem ahead of rising to stand when it started to play—repeated his refrain that the protests weren’t good for the NFL in the long run.

In the days after that meeting, NFL commissioner Roger Goodell backtracked on his public support of protesting players, sending a league-wide memorandum arguing that the “current dispute over the National Anthem is threatening to erode the unifying power of our game.” Goodell also reportedly considered a tweak to the league’s operations manual that would have made standing for the anthem obligatory.

It will be up to a neutral arbitrator—reportedly, University of Pennsylvania law professor Stephen Burbank—to determine whether all this information adds up to a strong implicit collusion case. Kaepernick’s legal team, though, won’t necessarily have to rely solely on publicly available evidence.

While Burbank will ultimately decide what evidentiary maneuvers to allow, a source generally familiar with how such arbitration proceedings work told me that Kaepernick’s lawyers might be able to depose those NFL owners who have met with Trump. That source added that Kaepernick’s legal team could request all electronic communications among and between teams about Kaepernick—potentially millions of words of emails, texts, and documents. A third-party electronic discovery vendor would look through this metadata for search terms like Kaepernick, Colin, anthem, protests, and Trump, and provide Kaepernick’s lawyers with relevant evidence. Again, it will be up to the arbitrator to decide whether to allow such a search to go forward. If league and team officials refuse to turn over this information, the arbitrator could use that refusal as grounds to rule adversely against them. (This was what Roger Goodell did as arbitrator when he cited Tom Brady’s refusal to turn over relevant texts in his decision to suspend the New England Patriots quarterback over deflategate.)

The grievance letter filed by Kaepernick on Sunday puts the NFL and all 32 teams on notice that they “are required by law to preserve all documents, emails, text messages, memoranda, notes, and all other electronically stored information (ESI) which is reasonably calculated to lead to the discovery of admissible evidence in this action.” Finding definitive proof in all of that data might not be necessary to prove collusion, though.

Gene Orza, the lawyer who defeated Major League Baseball to the tune of $280 million in an epochal 1980s collusion case, told CNNMoney that a “smoking gun was not the basis of that [MLB] decision. Instead it was simply the inference of collusion, that all of [a] sudden not one player who was a free agent was getting an offer.” The NFL uses a “clear preponderance of evidence” standard in its arbitration, though, and MLB did not at that time. This will make beating the league a heavier lift for Kaepernick, as will the fact that he’s currently the lone player who has allegedly been blackballed and is a legitimately controversial figure. Two years ago, for example, Barry Bonds lost his arbitration proceeding after accusing MLB of colluding to blackball him after controversies surrounding his use of performance-enhancing drugs.

William Gould, a former National Labor Relations Board chairman and salary arbitrator for Major League Baseball, told USA Today that Kaepernick is “going to have to show some kind of pattern—of dealings with the clubs, where clubs were aware that he was willing and able to work, where there was some sort of communication with him and then [those clubs for] unexplained reasons went elsewhere.”

This pattern is precisely what Kaepernick alleges in his grievance:

We know the NFL is full of quarterbacks who aren’t as good as Colin Kaepernick. We’ll soon find out if this fact means Kaepernick will emerge victorious in arbitration. Perhaps, it will ultimately be President Trump’s words and deeds that help the quarterback score a huge win off the field.

You depend on Slate for sharp, distinctive coverage of the latest developments in politics and culture. Now we need to ask for your support.

Our work is more urgent than ever and is reaching more readers—but online advertising revenues don’t fully cover our costs, and we don’t have print subscribers to help keep us afloat. So we need your help.