And possibly handed him the whole election. 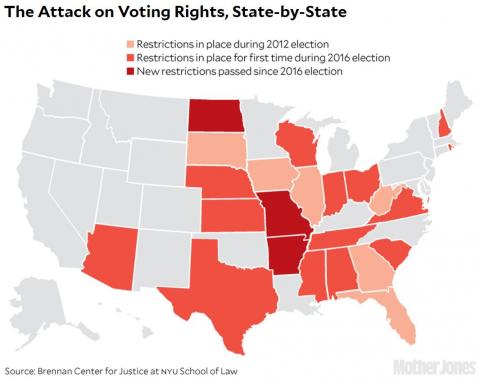 You can’t say Andrea Anthony didn’t try. A 37-year-old African American woman with an infectious smile, Anthony had voted in every major election since she was 18. On November 8, 2016, she went to the Clinton Rose Senior Center, her polling site on the predominantly black north side of Milwaukee, to cast a ballot for Hillary Clinton. “Voting is important to me because I know I have a little, teeny, tiny voice, but that is a way for it to be heard,” she said. “Even though it’s one vote, I feel it needs to count.”

She’d lost her driver’s license a few days earlier, but she came prepared with an expired Wisconsin state ID and proof of residency. A poll worker confirmed she was registered to vote at her current address. But this was Wisconsin’s first major election that required voters—even those who were already registered—to present a current driver’s license, passport, or state or military ID to cast a ballot. Anthony couldn’t, and so she wasn’t able to vote.

The poll worker gave her a provisional ballot instead. It would be counted only if she went to the Department of Motor Vehicles to get a new ID and then to the city clerk’s office to confirm her vote, all within 72 hours of Election Day. But Anthony couldn’t take time off from her job as an administrative assistant at a housing management company, and she had five kids and two grandkids to look after. For the first time in her life, her vote wasn’t counted.

I met Anthony on a rainy Wednesday evening in mid-August. She had recently moved to Madison for a job making sales calls for the health insurance company Humana and was living in an Econo Lodge off the freeway with two of her kids and her mother-in-law as she looked for permanent housing. “This particular election was very important to me,” she told me in the motel’s small lobby, citing her strong aversion to Donald Trump. “I felt like the right to vote was being stripped away from me.”

Anthony said her 19-year-old daughter and 21-year-old nephew, who didn’t drive regularly and had misplaced their licenses, were also stymied by the new law. “It was their first election, and they were really excited to vote,” she said. But they didn’t go to the polls because they knew their votes wouldn’t count. Both had planned to vote for Clinton.

On election night, Anthony was shocked to see Trump carry Wisconsin by nearly 23,000 votes. The state, which ranked second in the nation in voter participation in 2008 and 2012, saw its lowest turnout since 2000. More than half the state’s decline in turnout occurred in Milwaukee, which Clinton carried by a 77-18 margin, but where almost 41,000 fewer people voted in 2016 than in 2012. Turnout fell only slightly in white middle-class areas of the city but plunged in black ones. In Anthony’s old district, where aging houses on quiet tree-lined streets are interspersed with boarded-up buildings and vacant lots, turnout dropped by 23 percent from 2012. This is where Clinton lost the state and, with it, the larger narrative about the election.

Clinton’s stunning loss in Wisconsin was blamed on her failure to campaign in the state, and the depressed turnout was attributed to a lack of enthusiasm for either candidate. “Perhaps the biggest drags on voter turnout in Milwaukee, as in the rest of the country, were the candidates themselves,” Sabrina Tavernise of the New York Times wrote in a post-election dispatch that typified this line of analysis. “To some, it was like having to choose between broccoli and liver.”

The impact of Wisconsin’s voter ID law received almost no attention. When it did, it was often dismissive. Two days after the election, Talking Points Memo ran a piece by University of California-Irvine law professor Rick Hasen under the headline “Democrats Blame ‘Voter Suppression’ for Clinton Loss at Their Peril.” Wisconsin Gov. Scott Walker said it was “a load of crap” to claim that the voter ID law had led to lower turnout. When Clinton, in an interview with New York magazine, said her loss was “aided and abetted by the suppression of the vote, particularly in Wisconsin,” the Washington Examiner responded, “Hillary Clinton Blames Voter Suppression for Losing a State She Didn’t Visit Once During the Election.” As the months went on, pundits on the right and left turned Clinton’s loss into a case study for her campaign’s incompetence and the Democratic Party’s broader abandonment of the white working class. Voter suppression efforts were practically ignored, when they weren’t mocked.

Stories like Anthony’s went largely unreported. An analysis by Media Matters for America found that only 8.9 percent of TV news segments on voting rights from July 2016 to June 2017 “discussed the impact voter suppression laws had on the 2016 election,” while more than 70 percent “were about Trump’s false claims of voter fraud and noncitizen voting.” During the 2016 campaign, there were 25 presidential debates but not a single question about voter suppression. The media has spent countless hours interviewing Trump voters but almost no time reporting on disenfranchised voters like Anthony.

Three years after Wisconsin passed its voter ID law in 2011, a federal judge blocked it, noting that 9 percent of all registered voters did not have the required forms of ID. Black voters were about 50 percent likelier than whites to lack these IDs because they were less likely to drive or to be able to afford the documents required to get a current ID, and more likely to have moved from out of state. There is, of course, no one thing that swung the election. Clinton’s failings, James Comey’s 11th-hour letter, Russian interference, fake news, sexism, racism, and a struggling economy in key swing states all contributed to Trump’s victory. We will never be able to assign exact proportions to all the factors at play. But a year later, interviews with voters, organizers, and election officials reveal that, in Wisconsin and beyond, voter suppression played a much larger role than is commonly understood.

Republicans said the ID law was necessary to stop voter fraud, blaming alleged improprieties at the polls in Milwaukee for narrow losses in the 2000 and 2004presidential elections. But when the measure was challenged in court, the state couldn’t present a single case of voter impersonation that the law would have stopped. “It is absolutely clear that [the law] will prevent more legitimate votes from being cast than fraudulent votes,” Judge Lynn Adelman wrote in a 2014 decisionstriking down the law. Adelman’s ruling was overturned by a conservative appeals court panel, which called Wisconsin’s law “materially identical” to a voter ID law in Indiana upheld by the Supreme Court in 2008, even though Wisconsin’s law was much stricter. The panel said the state had “revised the procedures” to make it easier for voters to obtain a voter ID, which reduced “the likelihood of irreparable injury.” Many more rounds of legal challenges ensued, but the law was allowed to stand for the 2016 election.

After the election, registered voters in Milwaukee County and Madison’s Dane County were surveyed about why they didn’t cast a ballot. Eleven percent cited the voter ID law and said they didn’t have an acceptable ID; of those, more than half said the law was the “main reason” they didn’t vote. According to the study’s author, University of Wisconsin-Madison political scientist Kenneth Mayer, that finding implies that between 12,000 and 23,000 registered voters in Madison and Milwaukee—and as many as 45,000 statewide—were deterred from voting by the ID law. “We have hard evidence there were tens of thousands of people who were unable to vote because of the voter ID law,” he says.

“This particular election was very important to me. I felt like the right to vote was being stripped away from me.”

Its impact was particularly acute in Milwaukee, where nearly two-thirds of the state’s African Americans live, 37 percent of them below the poverty line. Milwaukee is the most segregated city in the nation, divided between low-income black areas and middle-class white ones. It was known as the “Selma of the North” in the 1960s because of fierce clashes over desegregation. George Wallace once said that if he had to leave Alabama, “I’d want to live on the south side of Milwaukee.”

Neil Albrecht, Milwaukee’s election director, believes that the voter ID law and other changes passed by the Republican Legislature contributed significantly to lower turnout. Albrecht is 55 but seems younger, with bookish tortoise-frame glasses and salt-and-pepper stubble. (“I looked 12 until I became an election administrator,” he joked.) At his office in City Hall with views of the Milwaukee River, Albrecht showed me a color-coded map of the city’s districts, pointing out the ones where turnout had declined the most, including Anthony’s. Next to his desk was a poster that listed “Acceptable Forms of Photo ID.”

“I would estimate that 25 to 35 percent of the 41,000 decrease in voters, or somewhere between 10,000 and 15,000 voters, likely did not vote due to the photo ID requirement,” he said later. “It is very probable that between the photo ID law and the changes to voter registration, enough people were prevented from voting to have changed the outcome of the presidential election in Wisconsin.”

A post-election study by Priorities USA, a Democratic super-PAC that supported Clinton, found that in 2016, turnout decreased by 1.7 percent in the three states that adopted stricter voter ID laws but increased by 1.3 percent in states where ID laws did not change. Wisconsin’s turnout dropped 3.3 percent. If Wisconsin had seen the same turnout increase as states whose laws stayed the same, “we estimate that over 200,000 more voters would have voted in Wisconsin in 2016,” the study said. These “lost voters”—those who voted in 2012 and 2014 but not 2016—”skewed more African American and more Democrat” than the overall voting population. Some academics criticized the study’s methodology, but its conclusions were consistent with a report from the Government Accountability Office, which found that strict voter ID laws in Kansas and Tennessee had decreased turnout by roughly 2 to 3 percent, with the largest drops among black, young, and new voters.

According to a comprehensive study by MIT political scientist Charles Stewart, an estimated 16 million people—12 percent of all voters—encountered at least one problem voting in 2016. There were more than 1 million lost votes, Stewart estimates, because people ran into things like ID laws, long lines at the polls, and difficulty registering. Trump won the election by a total of 78,000 votes in Michigan, Pennsylvania, and Wisconsin.

In Wisconsin, the intent of those who pushed for the ID law was clear. On the night of Wisconsin’s 2016 primary, GOP Rep. Glenn Grothman, a backer of the law when he was in the state Senate, predicted that a Republican would carry the state in November, even though Wisconsin had gone for Barack Obama by 7 points in 2012. “I think Hillary Clinton is about the weakest candidate the Democrats have ever put up,” he told a local TV news reporter, “and now we have photo ID, and I think photo ID is going to make a little bit of a difference as well.”

The strategy worked. While we’ll never know precisely how many people were prevented from voting, it’s safe to say that thousands of Wisconsinites like Anthony were denied one of their most fundamental rights. And with Republicans now in control of both the executive and legislative branches in the federal government and a majority of states, that problem will likely get worse.

Ari Berman is a senior reporter at Mother Jones, covering voting rights, and a Reporting Fellow at The Nation Institute. He’s the author of Give Us the Ballot: The Modern Struggle for Voting Rights in America and Herding Donkeys: The Fight to Rebuild the Democratic Party and Reshape American Politics. He won a 2017 Izzy Award for outstanding achievement in independent media. Follow him on Twitter at @ariberman.

Are you suffering from Trump fatigue? That's what they want.
Understand the playbook and support MoJo during our fall pledge drive.