Do We Really Know What He Signed Up For?

What are we actually fighting for? The loved ones of lost soldiers deserve more than comforting words. They deserve justice. 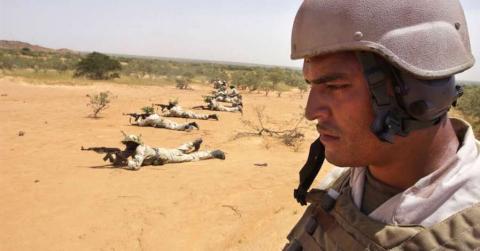 U.S. troops have been stationed in Niger at various times for years. President Barack Obama established a military presence there in 2013. , Jacob Silberberg/Getty Images

President Trump has ignited another public firestorm over his woeful attempt to console as Commander in Chief a war widow. After first lying about whether past presidents phoned the partners of fallen soldiers, he then shockingly told the grieving wife and mother that her husband “knew what signed up for, but I guess it still hurt”. The attempt by General Kelly to defend this remark is arguably even more indefensible and insulting.

The sheer offensiveness of this statement, however, draws attention away from the fundamental question of whether in fact Sgt. La David Johnson did know what he signed up for when he was sent to Niger. While it is impossible for anyone who was not close to Sgt. Johnson to positively answer this question, it does call on Americans to ask themselves if they know why this young person was killed half a world away from his loved ones? The answers are far more disturbing than Trump’s appalling remarks or even the respectful words of sorrow expressed by past Presidents.

What are we actually fighting for?

In the aftermath of Trump’s comments, there ha been renewed questions as to why the US has troops in Niger in the first place? The official story is that the US is there to combat terrorism. As reported by CNN, “The nation, along with Chad and Mali, serves as a bridge between north and sub-Saharan Africa, and all three serve as significant transit routes for local al Qaeda and ISIS affiliates. The terror groups use these routes to generate revenue that helps them recruit, expand and export attacks”. Since 2013 alone the number of troops has grown to about 800.

However, digging a little deeper this rationale becomes much less credible. Understanding Niger’s recent history is illuminating, in this respect. The country is led by Mahamadou Issoufou who came to power in 2011 on a leftwing “Renaissance program” promising massive social development investment, particularly attractive to a country that consistently ranks one of the worst in the world in terms of quality of life.

Once installed as President, he took the country in a quite different direction. He has largely aborted his ambitious welfare plans for one of rapid and dramatic military expansion. As a staunch ally of the US war on terror, Niger is now a key client state to promote American global dominance and the profits of the international arms industry.

Not surprisingly, has Issoufou become indispensible to US interests, even if keeping him power means subverting Niger’s burgeoning democracy. In 2016 he was re-elected in highly questionable circumstances. The election was boycotted by all the major opposition parties, which won by an astonishing 92% of the vote. It was widely discredited by the international community, a judgment that the US ignored, with the State Department providing him with a ringing endorsement. Since his victory, Niger has become increasingly repressive and authoritarian, linked to what one prominent commentator has referred to as “the un-freedom agenda”.

There was a clear and tragic reason Sgt. Johnson died in Niger. It was for corporate plunder and US military hegemony. In the uproar over the Trump’s conversation with his wife, we as a nation have yet to ask the more fundamental question of whether these were worthy enough for a young person to sacrifice his life for.

Trump’s actions and remark deserve to be publicly rebuked. Whether intentional or not, he continues to offend, and even more gallingly does so at the expense of the most vulnerable members of society – insulting grieving war widows and hurricane victims in Puerto Rico in the span of weeks. Everyday it seems that the office of the Presidency reaches a new modern low.

Yet this incident also shines a bright spotlight on something so much more offensive – that of the apology itself. It is the idea that comforting words for those who have lost their loved ones can somehow make up for the nefarious and often times criminal system that led to their death. As if a simple sorry is sufficient, a hollow ritual of expressing regret without doing anything to change the fundamental reason that this person gave the ultimate sacrifice of their life in the first place.

Much has been rightly said about the hypocrisy of sending men and women off to war only to ignore them through lack of funding and care when they return home. However, precious little is mentioned concerning our public hypocrisy of these all to hollow official apologies. This time honored ritual of President’s speaking and writing letters to the family of those who have fallen, allows us to ignore our deeper obligation as democratic citizens ensure that our leaders only engage in war as a last resort and for a just cause. It permits all of us too blissfully disengage from our most fundamental civic duty – to fight off those who would seek to profit off the blood of Americans, who would gladly sacrifice the lives of our fellow citizens for their own class based national interest.

Ultimately, when confronted with the death of Sgt. Johnson in Niger, our leaders and ourselves should not be sorry but outraged. The fact that we reserve our most passionate anger for Trump’s gaffe rather than the weapon industry and the military – industrial complex that killed him, reveals much about our own misguided morality as a culture. The real question is whether we know what he signed up for and if we do are we willing to do more than just offer a simple hollow apology.

Peter Bloom is a lecturer in the Department of People and Organisations at the Open University. He has published widely on issues of 21st century democracy, politics and economics in both scholarly journals and in publications including the Washington Post, The New Statesman, Roar, Open Democracy, The Conversation and Common Dreams. His books include Authoritarian Capitalism in the Age of Globalizationand Beyond Power and Resistance: Politics at the Radical Limits which will be released in November, 2016.