Newly declassified documents reveal the extent of US government knowledge and support of Indonesia's 1965 anti-Communist massacre. Estimates of the number executed range from between 100,00 to 1,000,000. 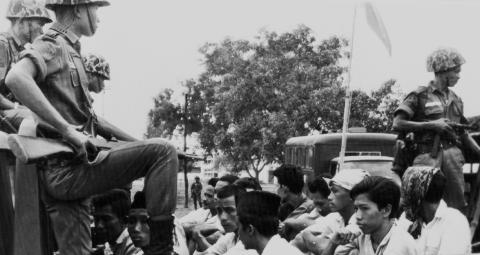 In this Oct. 30, 1965 file photo, members of the Youth Wing of the Communist Party of Indonesia are watched by soldiers as they await transfer to prison and likely execution in Jakarta. , AP

DECLASSIFIED files have exposed just how much the US knew about and supported the massacre of millions of Indonesians in the 1965 anti-communist purges.

The non-governmental National Security Archive research group published 39 documents on Tuesday, out of thousands of pages of newly declassified files from the US embassy in Jakarta.

They cover the period from 1963-66, documenting official knowledge and approval of the army’s death-squad operations to wipe out the three million-strong Communist Party of Indonesia (PKI) and its supporters.

Up to three million people were rounded up across the country, executed and dumped in mass graves.

The files show that the US provided the Indonesian army with lists of senior communist party officials, equipment and money during the massacres.

The purges led to the overthrow of communist-backed nationalist president Sukarno and the 31-year dictatorship of General Suharto.

The documents show US officials had credible evidence that contradicting the army’s claim about a supposed September 30 1965 bid by junior officers was ordered by the PKI — used as justification for the massacres.

A December 21 1965 diplomatic cable from the embassy’s first secretary Mary Vance Trent to Washington noted the “fantastic switch which has occurred over 10 short weeks.” Ms Trent estimated 100,000 had been slaughtered by then.

“Many provinces appear to be successfully meeting this problem by executing their PKI prisoners, or killing them before they are captured, a task in which Moslem [sic] youth groups are providing assistance,” he wrote.

A month later the US consulate in Indonesia’s capital Medan wrote that imams from the Muhammadiyah Muslim organisation were preaching that all communists should be killed, calling them the “lowest order of infidel, the shedding of whose blood is comparable to killing chicken.”

Britain also supported the massacres, documented by the historian Mark Curtis. Anti-communism appears to be on the rise in Indonesia, with rightwingers trying to shut down a meeting on the massacres just last month.