To better understand how incarceration has impacted young people in the U.S., we’re here to explain. 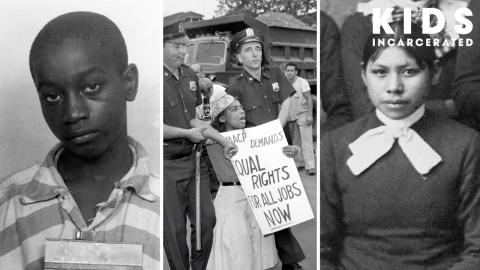 Since its infancy, the United States has impacted children through the penal establishment. Youth incarceration has taken many different forms, from boarding schools for indigenous children, to institutions that aimed to “pray the gay away” for LGBTQ youth, funneling children into legalized second-class citizenship through Japanese internment camps, juvenile detention or underfunded schooling. The criminalization of youth has influenced social crises that have defined our country, like lynching.

According to data from the Census of Juveniles in Residential Placement, over 46,000 juveniles were in some type of placement in state, local, or private facilities in 2015. One trend has been consistent throughout the history of the U.S.: Youth incarceration has disproportionately affected people of color and minorities.

Legal distinctions related to age provide a unique hurdle for young people in the penal system, who face restrictive rights based on their age in a country that benefits from profit through imprisonment. Understanding the history of youth incarceration requires examining how this country has defined the age of a “child,” and how they should be treated in the eyes of the law. Law from England influenced the earliest states, which distinguished “infant” from “adult.” Infants were seven years old or younger and could not be charged with a felony; adults were over the age of 14. Anyone from the age of 7 to 14 were within a “gray zone,” according to the American Bar Association. The “age of majority” or “emancipation” is when a citizen is no longer considered a minor or is legally exempt from the financial support of their parents or guardians, and it varies by state.

To better understand how incarceration has impacted young people in the U.S., we’re here to explain.

The colonies that became the United States relied on children as its very first laborers, who, technically, were incarcerated.

Nancy Isenberg’s White Trash: The 400-Year Untold History of Class In America explains how the U.S. — before it was actualized with founding documents — was seen by Great Britain “not as an Eden of opportunity, but as a giant rubbish heap that could be transformed into productive terrain where expendable people — waste people — would be unloaded from England; their labour would germinate a distant Wasteland.” This perception of English immigrants included British ideas of labor and indentured servitude.

For orphans or the children of beggars in Britain, this meant active exploitation by landowners and business owners in need of labor in what would become America. Indentured servitude proved to be a viable solution to the economic needs of the new colony across the sea. One of the main companies that offered contracts for indentured servitude in exchange for passage to Virginia was The Virginia Company of London, which settled in Jamestown in 1607 to “bring profit to its shareholders and to establish an English colony in the New World.”

More than 50% of those who were indentured servants in colonies south of New England were younger than 19 years old, with the youngest of them being six years old. Child servants could be punished by their parents or tradesmen for not following work orders, but also could be punished with fines or whippings by the colony court system. Historian Richard Hayes Phillips listed the names of more than 5,000 children kidnapped from Ireland, Scotland, England, and New England, and sold into slavery in Maryland and Virginia between 1660 and 1720.

In 1661, Virginia became one of the first states to acknowledge slavery in its laws, and by the next year, laws were passed to include the “illegitimate children” of indentured servants. These laws led to a shift from white indentured servants as a prominent portion of the labor force to African slaves. The laws passed in 1662 in Virginia made clear distinctions that declared all children “borne in this country shall be held bond or free only according to the condition of the mother.” This law resulted in the blanket enslavement of all youth born to black women and a decrease in the amount of white indentured servants used in the colonies during the 1660’s.

By establishing the colonies with an economic system dependent upon the indentured or slave labor of the most vulnerable in society, Britain and the emerging politics of the U.S. created a legalized class of laborers that could be cleverly trapped into forced labor for the sake of profit. This strategy is a precursor for what many private prisons do today, according to the ACLU.

Indigenous children were victims of state “boarding schools,” which started in the 1880’s, forcing young native people to unlearn their customs.

Before the arrival of the English, both the French and Spanish had arrived to North and South America. All groups treated indigenous people as subhuman, but the English committed widespread genocide of indigenous people through various methods. According to an article co-authored by historian Brett Rushforth in Slate, at least 10,000 members of indigenous tribes were enslaved from 1660 to 1760 in New France.

The Indian Removal Act of 1830 was implemented as a way to relocate members of indigenous tribes and establish treaties with all tribes east of the Mississippi River. Two decades years later, the establishment of Indian Appropriations Act of 1851 would set a new standard for creating “reservations,” where indigenous tribes would be forced to live. In addition to displacement and the establishment of reservations, English colonizers created boarding schools to virtually turn indigenous children into prisoners of the state.