Trump's approval rating is at historic lows for a first-term president, and the party that controls the White House almost always loses seats in midterm elections. The GOP held on to four House seats in special elections this year that took place in red districts, but Tuesday's shellacking at the polls is more in line with how many political observers believe 2018 will shake out. 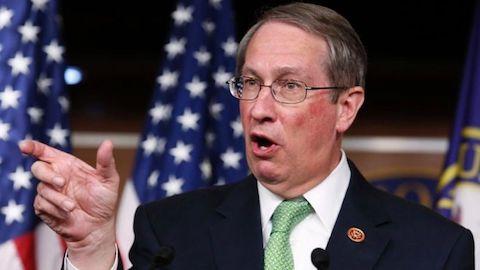 A retirement wave has hit House Republicans, emboldening Democrats who have become increasingly bullish about their prospects of winning back a majority in 2018.

House Judiciary Committee Chairman Bob Goodlatte (R-Va.) on Thursday became the latest Republican to announce he would not seek another term.

The 13-term Virginian followed Reps. Ted Poe (R-Texas) and Frank LoBiondo (R-N.J.), both of whom announced Tuesday -- hours before Republicans suffered sweeping losses at the polls -- that they'd retire from Congress.

All told, 29 Republicans will not seek reelection to their House seats, compared to only 11 for Democrats. Fifteen Republicans are retiring outright, rather than seeking other political offices or positions. Only two Democrats are doing the same.

"Anybody who has a pair of eyes and ears knows that the House is in play and at risk," Rep. Charlie Dent (R-Pa.), who heads a moderate GOP caucus and is not seeking reelection next year, told The Hill. "And I'm sure that fact enters into the calculation of many members who are contemplating their futures."

"Do you really want to go through another year like the last one?" Dent asked.

Not all of the retiring Republicans are exiting districts that are likely to be in play.

Goodlatte's district, for example, is reliably Republican and was won by President Trump in 2016 by 25 points.

In the 15 districts where members are retiring outright, Trump won six of them by 18 points or more.

Yet the retirements are expanding the map for Democrats.

LoBiondo has held his district for 12 terms, and it was not considered a likely Democratic pickup until his retirement. After his announcement, the Cook Political Report declared it a toss-up in 2018.

Trump's approval rating is at historic lows for a first-term president, and the party that controls the White House almost always loses seats in midterm elections. The GOP held on to four House seats in special elections this year that took place in red districts, but Tuesday's shellacking at the polls is more in line with how many political observers believe 2018 will shake out.

And the stampede for the exits could continue.

"I'm busy. I'm happy, hardworking, and hate to see some of these great people retire," said Rogers, who turns 80 next month.

Democrats are relishing every new departure.

Rep. Ben Ray Lujan (D-N.M.), chairman of the Democratic Congressional Campaign Committee, released a strategy memo on Thursday announcing that the national party had expanded its list of targeted House seats from 80 Republican-held districts to 91 in the wake of Tuesday's elections.

Democrats need to flip 24 seats to win back the majority in the House.

Lujan cited the rapid pace of GOP retirements in his memo. He pointed to a Sabato's Crystal Ball study that found the president's party has historically shed 22 points in races for open seats that take place in midterm years.

"In general, eliminating the power of incumbency creates a great deal of advantage for House Democratic challengers," Lujan wrote.

The DCCC outraised the National Republican Congressional Committee by $9 million in the most recent quarter, although the NRCC still has about $12 million more in cash on hand.

But perhaps the most startling fundraising trend was uncovered by a Brookings Institution study. Analyst Michael Malbin found that nearly 100 Democrats running in GOP-held districts in 2018 had already raised at least $50,000. The last comparable election cycle was the 2010 GOP wave election, when 60 Republicans running in Democrat-held district had raised the same amount at this point.

"It's a lot of good talent that we're going to lose. It's tough," Majority Whip Steve Scalise (R-La.), the GOP's chief vote-counter, told The Hill. But he joked: "I told [retiring colleagues] to stop talking to one another because somebody else might want to join them. The sad thing is they start smiling more and more after they make the announcement.

"We just have to tamp that down."

National Republicans say the retirements are being overplayed, noting that they're happening for a variety of reasons.

Goodlatte, Poe and Rep. Jeb Hensarling (R-Texas) were term-limited for their positions as committee chairs. Many House members have left for administration posts or are leaving to run for higher office. GOP Reps. Raul Labrador (Idaho), Kristi Noem (S.D.), Diane Black (Tenn.), Jim Renacci (Ohio) and Steve Pearce (N.M.) are all running for governor of their states, while others are running for the Senate.

Rep. Pat Tiberi (R-Ohio) was offered a job atop the Ohio Business Roundtable that he said would allow him to spend more time with his family.

One House GOP strategist argued that only a handful of retirements are taking place in Democrat-leaning districts, pointing to seats currently held by Lobiondo and Reps. Ileana Ros-Lehtinen (R-Fla.) and Dave Reichert (R-Wash.).

Republicans believe state Sen. Dino Rossi (R-Wash.) will hold Reichert's seat, which is seen as a toss-up by Cook. Ros-Lehtinen's is seen as a district leaning Democrat.

Republicans still have way more incumbents running than Democrats do. In many districts, Democrats will have to survive multi-candidate primaries, potentially weakening them ahead of the general election.

"If you look across the board it's a variety of reasons, and most of the retirements are in very red districts that we'll keep," said a House GOP strategist who requested anonymity. "Each member that retires does so with their own reasons. ... Dent mentioned he wasn't happy, but other than that, it hasn't been a lot of folks leaving because of their electoral prospects; it's been normal attrition. You go into any cycle prepared for retirements."