The US, Africa and a New Century of War

"In fact, according to data supplied by US Special Operations Command, there are now more special operations personnel devoted to Africa than anywhere except the Middle East." 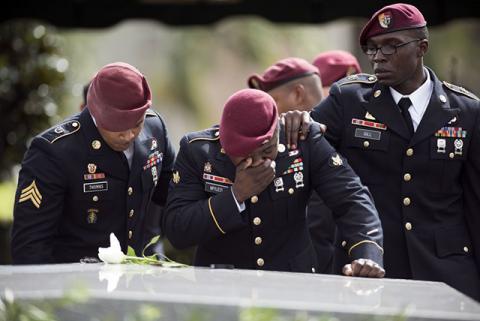 Most Americans' broad ignorance regarding Africa is a long-standing phenomenon, one perpetuated from the top down. In 2008, the campaign staffers tasked to wrangle Sarah Palin were terrified people would discover she thought Africa was one big country. In 2001, President George W. Bush told a gathering in Sweden, "Africa is a nation that suffers from incredible disease." Vice President Joe Biden, speaking to none other than the US-Africa Leaders Summit in 2014, said, "There's no reason the nation of Africa should not join the ranks of the world's most prosperous nations." That's twice in one sentence, Joe.

After four elite US soldiers were killed in an ambush in Niger several weeks ago, and after President Trump made a gut-grinding botch of offering condolences to the families of the fallen, Africa policy has become a hot topic in US politics. Beyond the febrile fodder of yet another presidential humiliation lay the deeper question: What were those four soldiers doing in Niger?

South Carolina Republican Sen. Lindsey Graham, who sits on the Armed Services Committee that oversees the Pentagon, apparently just found out that the US has roughly 1,000 troops stationed in Niger. When asked why they were there, he gave the standard reply we always hear in the age of the Authorization of Use of Military Force: fighting terrorists.

In fact, the US has some 6,000 troops spread throughout virtually every country in Africa, with heavy concentrations in the middle third of the continent where groups like ISIS, al-Qaeda, Boko Haram and Al-Shabaab are most active. US Special Forces are, at any given time, carrying out approximately 100 missions in Africa, ostensibly in the name of the nation they are operating from. "In 2006, just 1 percent of all US commandos deployed overseas were in Africa," writes journalist Nick Turse. "In 2010, it was 3 percent. By 2016, that number had jumped to more than 17 percent. In fact, according to data supplied by US Special Operations Command, there are now more special operations personnel devoted to Africa than anywhere except the Middle East."

This, reports Turse, is on top of a broad, secrecy-shrouded drone war being waged in Africa by the US. According to the US Africa Command (AFRICOM), there is only one US drone base in Africa, located at Camp Lemonnier in Djibouti, which was established shortly after the September 11 attacks as a tactical jump-off point for military actions in the Middle East. However, Turse was able to compile a list of more than 60 drone bases and other outposts currently dotting the African continent, all of them quite active.

It should come as no surprise that private military and security contractors (PMSCs) are also doing a booming business in Africa. After all, the whole concept of the modern military contractor was invented in Africa by the British, Dutch and, of course, the Americans more than 50 years ago in places like South Africa, Angola and the Belgian Congo. Their purpose today is twofold: To serve as a quiet, unobtrusive support structure for US forces, and to provide security for mines and other highly lucrative operations seeking to plumb the continent for its vast resources.

Odds are better than good that the cobalt in your smartphone was mined by a company that employs a PMSC on the ground to defend its interests, often violently if necessary. It is a dangerously volatile situation. In South Africa, for one example, the private military contractors outnumber the government's standing army.

And so, US soldiers are spread throughout the continent, ostensibly to train the military forces of dozens of countries, while the contractors -- Kellog Brown & Root, Daamco USA, Praemittas Group and R4 Inc., to name but a few -- offer muscular support even as they reap huge profits by serving business interests. US involvement in Africa has skyrocketed since 2001, through the administrations of three different presidents, and shows no sign of slowing.

Indeed, for a military industrial complex always greedy for more "markets" to exploit, Africa represents a whole new frontier of possibilities. There is a game of thrones being played in Africa between the US, China, France (which uses African uranium to fuel 75 percent of its electricity) and other non-African nations, a 21st century shadow play of the colonialism and imperialism that left much of the continent in the chaotic hands of warlords and Western-armed despots for generations. The nations most involved, it must be noted, are also the world's leading dealers of military arms and hardware.

"Africans do not want this competition over their territory," Horace Campbell, a peace and justice scholar and professor of African American studies and political science at Syracuse University, explained to Democracy Now! "What Africans want is a demilitarization of the continent and for the duplicitous role of France, the European Union and the United States to end in this so-called war on terror. The African people want money for reconstruction, so that in a country such as Somalia, every cent that is being used for fighting the war on terror could be spent in building schools, and then the police operation could be used against al-Shabab."

For the US, its Western allies and even its enemies, policy toward Africa is all about the money -- mining, oil, timber -- and about the bullets, which cost money. The war machine must be fed, everyone loves their smartphones, and nobody over here knows what's going on way over there. Know this: We have boots, military and contractor, on the ground in Africa to all points on the compass, and the drones fill the air. Our involvement grows every day, and the op-tempo of our special forces there is white hot.

All this, and yet so many of us – even those of us within the peace and social justice movement – dawdle in diffident ignorance on the matter of Africa and its latest plunderers, not to mention its resistance movements.

"There seems to be a deficit of caring -- or rather, caring enough to self-educate, research and act -- within the Western left on the current movements, histories and activism within African countries," writes Devyn Springer for Truthout. "To place our actions where our rhetoric is, we must move forward in such a way that makes our studies of history, theory and current events inclusive of the unavoidable important work of African revolutionaries, and the current plights of African countries and people living on the continent."

The so-called war on terror -- known to the troops who fight it as the "Forever War" -- has yet another front, brought to us by the same interests that gave us Afghanistan, Iraq and Syria. Unless this inertia is thwarted, expect more of the same in a continental frame. Those four elite troops who died and came home to such controversy are only the beginning.

William Rivers Pitt is a senior editor and lead columnist at Truthout. He is also a New York Times and internationally bestselling author of three books: War on Iraq: What Team Bush Doesn't Want You to Know, The Greatest Sedition Is Silence and House of Ill Repute: Reflections on War, Lies, and America's Ravaged Reputation. His fourth book, The Mass Destruction of Iraq: Why It Is Happening, and Who Is Responsible, co-written with Dahr Jamail, is available now on Amazon. He lives and works in New Hampshire.

Exposing the wrongdoing of those in power has never been more important. Support Truthout's independent, investigative journalism by making a donation!