Focusing mainly on Trump's first year in office, the authors emphasize what they call a pattern of systematic reaction, where growing voter frustration regularly drives each party in and out of control. Trump arrived with scant political capital, amassed little and appears to have no strategic competence going forward. While the authors believe Trump can develop one, the essayist faults the authors for offering nothing but wishfulness to back up the assumption. 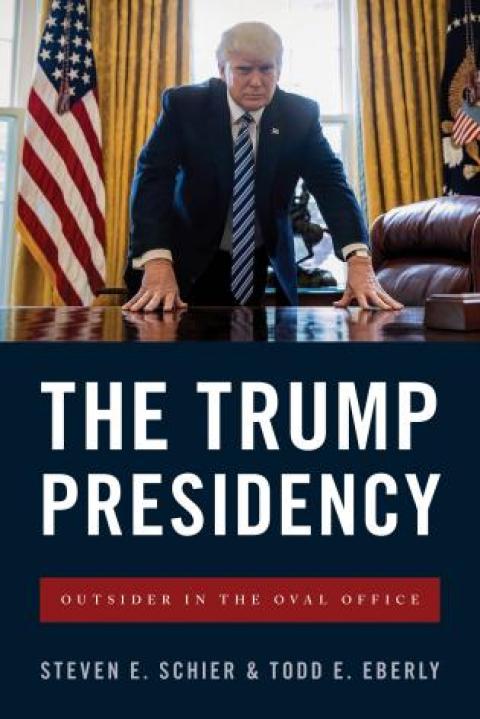 Written at top speed and with a bare minimum of punditry, Steven E. Schier and Todd E. Eberly’s The Trump Presidency: Outsider in the Oval Office (Rowman & Littlefield) is the first book from a scholarly press about Trump’s first year in office. Or about the first half of that year, at least, though it felt a lot longer at the time.

The Trump Presidency is an analysis, not a chronology, but a careful reading suggests that it was substantially finished by the time John Kelly became chief of staff at the end of July. You get a sense of the authors working feverishly, borne up by the prospect of getting a little rest before the new semester began. (Schier is professor of political science at Carleton College, and Eberly is an associate professor of political science and public policy at St. Mary's College of Maryland.) And it was a reasonable expectation. The president would be on vacation and Congress in recess in August; the Washington press corps looked forward to getting eight consecutive hours of sleep on a regular basis for the first time since April 2016.

But the defining quality of the Trump era is that it never lets you forget about it for very long. August brought renewed tensions with North Korea, violence between white supremacists and antiracist protesters in Charlottesville, and a string of resignations from presidential commissioners in protest against Trump for apportioning equal blame for that violence “on both sides.” August also saw the departure of two advisers, Steve Bannon and Sebastian Gorka, whose official responsibilities were never clear, but who in practice served as the president’s ideologues in residence. Each claimed to have left voluntarily, though leaks at the time suggested otherwise.

In keeping with the format for citing online material, Schier and Eberly indicate when each item they refer to was accessed. Just a few date from the first half of August, but there is a kind of surge on Aug. 21 and 22, when at last their labors were complete -- seven months after inauguration, not quite to the day.

Individually and in collaboration, the authors have written and edited dozens of books on presidential campaigns and administrations from Bill Clinton's onward. As political scientists, they look for the patterns and regularities beneath the course of events -- and on that point, it bears noting that their focus here is mainly on Trump in office rather than as a candidate. While taking up the issue of whether 2016 was a transformational or realignment election, Schier and Eberly say relatively little about the relationship between Trump’s particular variety of nativism and protectionism, on the one hand, and the development of the Republican Party since the Reagan years, on the other.

Instead, they emphasize the established pattern of “systematic reaction” in which growing voter frustration regularly drives each party in and out of control of the White House and of Congress. Since 1952, there has only been one case of a party holding the White House for more than two terms. With that in mind, Trump’s victory seems like a regular swing of the pendulum -- except for the anomalous fact that it was Hillary Clinton, the “insider,” who won the popular vote by a comfortable margin. The “outsider,” having won the Electoral College majority, took office with what was (and remains) the lowest public-approval ratings for a new president since surveys began in the 1930s.

While Trump took office with the Republicans holding unified control of Congress, the advantage was minimal, since he had run as an outsider to the party as well as to Washington. He arrived, the authors say, “with a political victory that shocked the world but produced virtually no political capital for the new president.” And their account of his first months in office might be read as a case study in how someone can manage, against all odds, not to accumulate any. Most of the legislation he signed in his first six months consisted of regulatory rollbacks under the Congressional Review Act; 60 percent of them were one page long.

Otherwise, the lack of a working relationship with congressional leaders obliges him to rely on “the unilateral tools of presidential proclamations, memoranda and executive orders to reverse additional regulations under his direct authority.” Also, tweeting. Every chapter of The Trump Presidency opens with one or two items from his Twitter feed, and the authors quote them to document various points. As a medium, Twitter has allowed him to carry on a really impressive range of feuds with individuals, institutions, nations and provisions of the United States Constitution. None of which, by Schier and Eberly’s account, banks him much credit toward the conduct of political business.

A particularly interesting section of the book looks at Trump through the distinction (borrowed from the political scientist Paul Quirk) between two categories of presidential leadership: the self-reliant and the minimal. The former, exemplified by Franklin D. Roosevelt, “assumes significant responsibility for all decision making” and “requires a substantial degree of skill as well as a clear understanding of how government and policy work” -- or at least “the ability to ingest and digest significant amounts of information in order to make decisions.” This seems wide of the mark.

Trump might be assumed to fall under the other heading. The minimalist is “not required to be particularly well versed in the specifics of governing or policy” and “acts very much as a chairman of the board responsible for setting general policies and goals.” The example suggested is Ronald Reagan, known for “delegating to his cabinet and other key personnel the responsibility of determining specifics.” But successfully delegating responsibility would seem to preclude saying your secretary of state is “wasting his time” with diplomacy or holding a grudge against the attorney general and making sure everyone hears about it.

The authors say, per their colleague Quirk, that the contemporary presidency is too complex a job for either the self-reliant or the minimalist type to do it adequately. Trump, they write, “embodies elements of the minimalist and self-reliant models.” They express hope that he will acquire what Quirk terms "strategic competence" -- a blend of "self-discipline, a knowledge of one's limitations and abilities, and a willingness to accept the advice and counsel of those who may hold the expertise he lacks." Nothing in the book seems to shore up the assessment that anything of the sort is possible; it stands as an example of wishfulness at its most desperate.

Inside Higher Ed describes itself as "The Most Influential and Engaged Community in Postsecondary Learning." Information on the service is available at its website.