Residents of Winlock, Washington can barely stream Spotify and Netflix. Changes to Obama’s net neutrality rules are going to make things even worse. 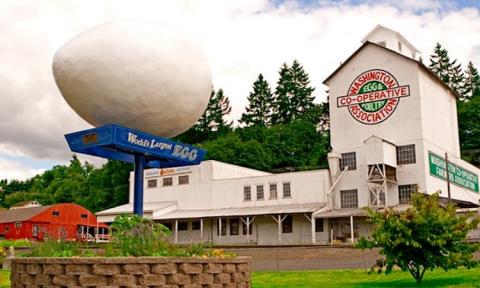 Many of the 1,300 residents of Winlock report frustratingly slow connections – with speeds similar to the dial-up days of the 1990s., Alamy

It’s Saturday morning at a café near the museum in Winlock, Washington, and Michelle Conrow is eating brunch while surfing the internet on her laptop. What might seem a banal activity for many is a luxury for Michelle. The internet at her house just outside the town is primitive by today’s standards, with speeds similar to the dial-up days of the 1990s. It took three days to download Microsoft Office to her new computer.

Many of the 1,300 residents in this rural area, which was once the US’s second largest egg producer, report frustratingly slow connections. There’s no binging on the latest must-watch Netflix show or streaming music on Spotify to suit your mood. No quick downloading of a podcast for your journey to work as you grab your coat. No running several devices simultaneously as parents catch up with internet banking or shopping on Amazon while their children chat on social media and watch YouTube videos.

Some have no broadband at all because the only provider, CenturyLink, has maxed out its system and there is a waiting list to get a connection, while others live outside the service area. Conrow and others have been complaining about the service for years. And if the internet’s top regulator, the Federal Communications Commission (FCC), gets its way, Conrow worries things may never get better.

In 2015, under Obama, the FCC passed the open internet order, which treated the regulation of broadband as a utility, similar to electricity or water, something seen as essential to modern life. Among other rules companies were officially banned from offering tiered services – fast and slow lanes for different service in an attempt to preserve “net neutrality” – the principle that all traffic online should be treated equally. An ombudsman was established to police complaints about net neutrality.

With the FCC now under Republican control those plans are now on the chopping block. The regulator has outlined its plans to scrap the open internet rules and will vote to implement its plans in December.

Conrow’s husband Matthew works from home as a programmer for a company in Los Angeles. He gets just enough bandwidth to allow him to do his job, but said: “Nobody can touch the internet while I’m working because any drain at all kills it. We’re paying for 3Mbps. When I check my network, I get about 2.2max, usually less than two. The IT techs down in LA watch my connection in and they’re like: ‘Gee, your connection’s terrible!’.”

Conrow, a mail carrier, said: “Thankfully I don’t have to use the internet during the day, but I’d like to use it for more when I get home. We don’t stream anything – movies, Spotify … I’m really bummed out I can’t watch Stranger Things. We have to download podcasts overnight it takes so long.”

A couple of years ago, Conrow set up Winlock Needs Internet and residents banded together to lobby the cable company, politicians and the FCC for improvements to the service outside the town centre – but nothing has changed. Conrow says that their efforts, which included holding a town meeting with a representative from the cable company, have worn them down and they are increasingly resigned to the situation.

Conrow said: “There’s little financial return on the high cost of digging lines and putting in fibre in small, spread out communities.”

A spokesman for CenturyLink told the Guardian: “Based on our current plans and timeline, we have no plans at this time to build out our infrastructure in this area.

“The actual speed customers experience will vary depending on not only the bandwidth provided to the customer by CenturyLink, but also other factors outside of CenturyLink’s control such as customer location, the quality of the customer’s equipment and wiring within the home, and the websites accessed by the customer.”

Conrow is worried about plans put forward by the FCC chairman Ajit Pai, appointed by Donald Trump in January, to scrap the Obama-era protections. Last August he also proposed lowering the standards for high-speed internet.

Conrow said: “If the FCC lowers the requirements for what qualifies as high-speed internet and they hamstring net neutrality it would effectively shut down our hopes for useful connections. Nothing I’ve heard from Ajit Pai has left me feeling optimistic.”

She added: “We don’t have a choice as far as internet providers. If net neutrality goes out the window, we lose the choice about what they’re sending down the pipeline to us.”

In some ways, the digital situation in rural Winlock gives a glimpse of what service could be like if FCC oversight is curtailed, net neutrality is rolled back and internet providers are allowed to block or throttle traffic, or offer “fast lanes” to websites that pay extra for the privilege.

Mike Griffee, a chaplain at the Lewis Country Chaplaincy Services, lives just outside Winlock. He has difficulty doing online training courses without the screen freezing, finding it’s better to get up early when fewer people are online in his neighbourhood.

Griffee said: “It’s not just the training, we like to stream stuff from Netflix or Amazon in the evening, but there’s a lot of time you’re waiting and it’s buffering. It can take two hours instead of one to watch Midsomer Murders. It’s infuriating.”

Conrow added: “I’ve heard from parents that their kids struggle too, with more school assignments being done online.”

Patti Angeliz Sugita has no CenturyLink connection at her house a couple of miles from Winlock and gets her internet via satellite.

Sugita, who runs an animal rescue charity, has six satellite dishes at her property and finds the service better at night. “I wake up at 3am so that I can work in my office and have enough bandwidth to download files and upload videos needed for the charity.

“I can’t stream without constant buffering and towards the end of the month I can hardly access necessary sites.”

When the Conrows moved to Winlock from Los Angeles 10 years ago, they checked there was internet at the house before closing the deal.

“We moved up here … and found we were on the cusp of what the nearest hub could handle. It is enough to get a trickle,” Matthew Conrow said.

Being left behind by the internet also exacerbates an economic divide, he said.

“Properties are for sale and people come to look and hear they’ll have to live at dial-up speeds. Across the freeway is Toledo, which has fibre to every person’s door. It’s like: ‘Well I’m going to buy over there then’.”

He believes the internet should be treated as a public utility. “Someone needs to say, ‘you need to get the internet infrastructure out to these people’, because this is a basic need now, with schooling and working practices.

“It’s that feeling of being left behind from a basic service. You feel like you’re disconnecting, whether it’s colleagues in LA talking about a show you’ve not watched, or not being able to get Alexa. Then there’s the whole concept of the internet of things where everything in your house is connected to the internet – where does that leave us?”

Michelle Conrow picks up a book about the history of the US postal service lying next to her laptop, flicking through the pages.

“It talks about when there was a debate over whether we should have service to rural areas. It was all the same arguments about why we shouldn’t – too expensive, it doesn’t return the investment – and why we should – farmers need the news, people need to order things. It was a similar debate with the telephone, electricity … we’ve been here before.

“Are we going to end up with the internet for everybody just like these services that seem so obvious now?” She pauses. “I worry we won’t.”