John Steinbeck was one of the most prolific and, in my view, significant American novelists of the twentieth century. He was influenced by and synthesized his own politics and personal experience with the political culture and movements of the 1930s. 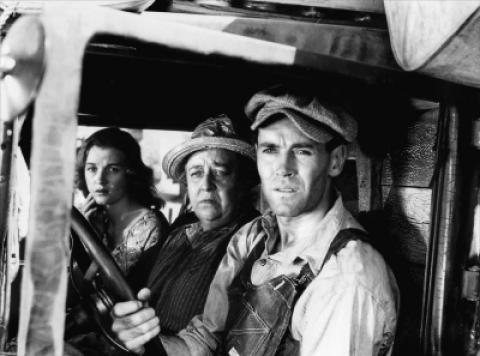 Steinbeck is most known for his iconic novel, The Grapes of Wrath, 1939, which described in detail the migration of the Joad family from their dust storm devastated farm land to California seeking work and eventually, they hoped, to accumulate enough money to buy land in this presumed mecca. Their travels involved encounters with thousands of other migrants, called "Okies," desperately leaving their homelands in several Southern and Midwest states to find a livelihood. The metaphor that shapes our consciousness of the suffering of the Great Depression of the 1930s, scholar Michael Denning suggests, is a natural disaster, the Dust Bowl.

But the natural disaster is in fact a part of a long history, political economy, politics and culture. New agricultural technologies, shifted the means of production and the products produced  making small farming obsolete. This and a debt system that kept tenant farmers in bondage all created an inextricable connection between a crisis-prone capitalist political economy and the delicate balance of the natural environment.

Corporate land owners demanded that tenant farmers produce more cotton and wheat from land that had been overworked and when those farmers could not produce enough to pay their debts, tractors came and plowed under fences, farmhouses, and ways of life. In fact, the new mechanized agriculture did not need as many tenant farmers to grow the crops that fed the nation. So between the erosion of the land, the huge winds that blew the dusty soil all across the sky, the new agriculture, the debt system millions were set afoot. The deeply indebted tenant farmers forced off their land and enticed by advertisements promising work and wealth in California began the long migrations from Oklahoma, Texas, Arkansas and elsewhere via old dilapidated trucks and cars to California.

We're sorry, said the owner men. The bank, the fifty-thousand-acre owner can't be responsible. You're on land that isn't yours. Once over the line maybe you can pick cotton in the fall. Maybe you can go on relief. Why don't you go on west to California? There's work there. And it never gets cold. Why, you can reach out anywhere and pick an orange. Why, there's always some kind of crop to work in. Why don't you go there? And the owner men started their cars and rolled away.[1]

Steinbeck powerfully describes the trek westward, the expenditures of life savings, the prejudices of gas station owners and other merchants against the "okies" along the way, the inspiring desperate efforts of migrants to share their meager food with others and the shocking arrival in a California where migrant labor is cheap and expendable. Grandpa and Pa Joad die along the way. Tom the second oldest son, and a recently paroled killer, joins a California labor struggle along the way and kills a sheriff in a brawl and is forced to leave the family. Tom tells his mother of his decision (powerfully recited by Henry Fonda in the movie version) after she asks how she will know about him. Tom Joad responds:

Well, maybe like Casy says, a fella ain't got a soul of his own, but on'y a piece of a big one-an' then-
.....I'll be ever'where-wherever you look. Wherever they's a fight so hungry people can eat, I'll be there. Wherever they's a cop beatin' up a guy, I'll be there....I'll be in the way guys yell when they're made an'-I'll be in the way kids laugh when they're hungry an' they know supper's ready. An when our folks eat the stuff they raise an' live in the houses they build-why I'll be there.[2]

Folk balladeer Woody Guthrie went to see the film, taken from Steinbeck's novel and wrote in a column in the People's World, the west coast paper of the Communist Party USA:

The Grapes of Wrath, you know is about us pullin' out of Oklahoma and Arkansas, and down south, and a driftin' around over state of California, busted, disgusted, down and out, and a lookin' for work.

Shows you how come us to be that a way. Shows the dam bankers men that broke us and the dust that choked us, and comes right out in plain old English and says what to do about it.

It says you got to get together and have some meetins, and stick together, and raise old billy hell till you get your job, and get your farm back, and your house and your chickens and your groceries and your clothes, and your money back.

Go to see Grapes of Wrath, pardner, go to see it and don't miss.

You was the star in that picture. Go and see your own self and hear your own words and your own song.[3]

One day shortly after seeing the film Guthrie bought a jug of wine, stayed up all night and penned the classic song depicting the story of The Grapes of Wrath called "Tom Joad." 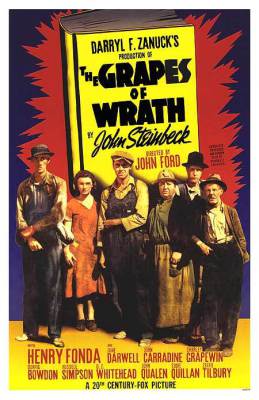 Paradoxically, John Steinbeck published his powerful novel of labor strife in a California apple orchard in 1936, three years before his more famous novel. In Dubious Battle is about Communist organizers trying to mobilize super-exploited apple pickers to strike for higher wages and the right to form a union. In Dubious Battle takes place in the aftermath of large-scale strikes all up and down the West Coast including a general strike by longshoremen in San Francisco. It was also at a time when the Communist Party USA was actively engaged in helping to build a new militant, largely industrial, labor movement. While the reader does not find out the outcome of the strike and the new young militant organizer Jim, working as an apprentice of the experienced Mac is killed by vigilantes, the narrative takes the effort and the party militancy seriously. It also addresses in depth the problematic tactical questions about how to build class consciousness, creating unity and willingness to struggle out of isolation and self-centeredness.

Near the end of the novel Mac, the Communist leader, is called upon to give a eulogy for Joy, a hapless working class activist who spent his life protesting and rallies and getting brutally beaten by police. Joy arrived in a trainload of scabs and almost immediately is shot and killed by the same vigilantes who later would kill Jim. Mac tells the assembled mourners about Joy:

"The guy's name was Joy. He was a radical! Get it? A radical. He wanted guys like you to have enough to eat and a place to sleep where you wouldn't get wet. He didn't want nothing for himself He was a radical!...D' ye see what he was? A dirty bastard, a danger to the government I don't know if you saw his face, all beat to rags. The cops done that because he was a radical. His hands were broke, an' his jaw was broke. One time he got that jaw broke in a picket line....He was dangerous-he wanted guys like you to get enough to eat....What are you going to do about it? Dump him in a mud-hole, cover him with slush. Forget him.[4]

[Harry Targ is a Professor of Political Science at Purdue University. He is a co-chair of the Committees of Correspondence for Democracy and Socialism (CCDS).]