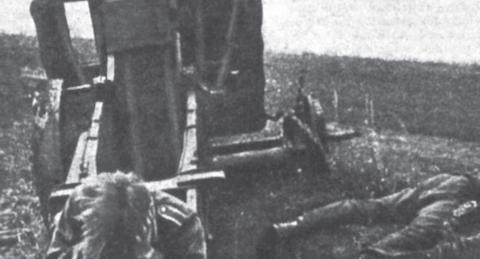 Like one who dreams the road ahead is steep

I know the way Fate has prescribed for us

That narrow way towards a precipice.

Above it is a picture of Adolf Hitler, standing at a podium, one arm extended, his wide eyes cast upward. Demagogic ecstasy, standing above the events of mere mortals, as alarmingly alluring as it is terrifying.

Bertolt Brecht assembled the first of the "photo-epigrams" that make up War Primer in 1940. The last came in 1947. Like some of Brecht's best-known works also written in that era - Mother Courage and Her Children, The Resistible Rise of Arturo Ui - the short book is preoccupied with both the meaning of war and the rise of totalitarianism.

Despite an obvious timeliness, even for some time after the war had ended, Brecht's humble volume wouldn't see publication until 1955, one year before his death. Censors and cultural gatekeepers in East Germany - where the author had taken residence in 1947 - demanded major revisions from Brecht; revisions he was for the most part unwilling to make.

As John Willett suggests in his afterword to the new version out from Verso Books, this was both due to East Germany's artistic policies of the time - a rigid, one-dimensional version of Soviet socialist realism - and the country's Cold War political calculus, which apparently might be threatened by the logic of a more undogmatic, multifaceted and humanist Marxist aesthetic approach. Would War Primer have brought down the Berlin Wall? No. But the hand-wringing it earned from Stalinist bureaucrats wasn't completely unwarranted.

War Primer's format is somewhat novel, even sixty years after its publication. Each page contains a photograph and lapidary four-line poem referencing it. Brecht credited the photomontage work of Dada artist and communist John Heartfield in the left magazine AIZ as inspiration. (Heartfield's "formalism" was consistently criticized by the German Communist Party and the publisher of AIZ would later be publicly expelled from the Communist International.)[2]

The images Brecht used came directly from mass-circulation magazines, chronicling the events of World War Two. The loose narrative weaves from the spectacle of Nazi Germany into the carnage of battlefields, from Winston Churchill holding a machine gun to the wry cruelties of occupied Singapore and Sicily, from the calculations of those who make war to the brutal realities of those who experience it.

The Marxist Brecht was not only obviously horrified by the war, but disgusted by the ease with which capitalism could so inexorably lurch toward it. As someone who had fled Germany after Hitler's rise to power he was naturally and violently opposed to the fascist regime, but was no less withering in his criticisms of the Allied powers. America and Britain are spared no punch, though the sensitivity and sympathy shown for refugees, wounded or dead soldiers, the dominated and bombarded, are unmistakable. 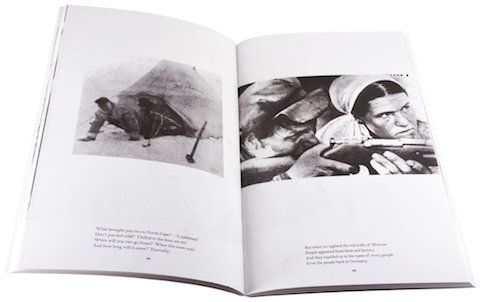 Halfway through the new Verso edition of War Primer.

Take, for example, the photograph on page 8, depicting two German soldiers emerging from underneath a train, rifles in hand. A caption reminds us that whatever advantage came from tanks or air force, it was grunts on the ground that made the actual difference in the wins and losses of the war. Brecht's poem reads:

Before you join the great assault

I see You peer around to spot the enemy.

Was that the French?

Or your own sergeant who Was lurking there to keep his eye on you?[3]

By itself, the photo is menacing. In contrast, Brecht's words are more than a bit puckish, cheeky even. They remind us that there is a hierarchy at work, power that pulls strings behind the image of brave/devious men (depending on whichever side you were on) going into battle.

Or consider page 59, which doles out the same for the "other side" of the war. A Sicilian peasant tells American Brigadier General Roosevelt (son of former president Theodore) which way the Germans fled. Says Brecht:

Alas, our overlords have fallen out.

Over our country, waterless and blighted

Only against us are all three united.[4]

This is the pattern that Brecht sketches for us in one way or another throughout the whole of the book. There is an obviously symbiotic relationship between image and word, one that reminds the reader of just how much one can transform the other. By themselves the images are disturbing, often terrifying. The four lines of poetry make them devastating. They achieve this through what was Brecht's greatest strength as a writer: his ability to coax out the twisted, icy rationale of a world whose overriding logic is self-justification. The bitter chuckle brought on in the reader by these words reveals unsettling machinations. War, capital and fascism are made mundane before that very mundanity is turned inside out by dint of its own force.

It's here that the skittishness of East German authorities starts to become frustratingly instructive. In his afterword, Willett lists some of the objections individuals tied to the Ministries of Culture and Education had with Brecht's proposed manuscript after receiving it in 1949. Most criticisms seem to approach the book more as a work of politics that can be "corrected" according to a party line rather than a more subjective work of art.

One particularly quizzical objection was Brecht's (quite obviously sarcastic) use of "God is a Fascist" beneath a picture of the four Spanish generals who spearheaded the turning over of their country to the Franco regime.[5] What could have possibly been the nature of this objection? Willett doesn't say, but we are left to surmise anxiety that readers won't grasp the irony. In fact, such irony might reveal an historical moment to have several intertwined layers of meaning, revealing the tangle between church, militarism, and authority.

What Brecht understood - along with his friend Walter Benjamin and other dissident, culturally-attuned Marxists - is that history, politics, and economics are all experienced aesthetically, overlapping and intersecting.[6] He also understood that the powerful knew how to consciously exploit that experience. Pitting this aesthetic strategy against itself required a risk that Stalinism seemed unwilling to take. Where apparatchiks seemed to lean toward spoon-feeding the reader, Brecht had, characteristically, made something that would thrum their critical imaginations.

There is a chilling lesson in this for today. Governments of all kinds - not only Stalinist or fascist - seem willing to render history into a reality show almost as a matter of default. The notion of "alternative facts," derided though it is, lives comfortably in the wider insistence that events must go such a way and to hell with the consequences. History is pounded down into a one-dimensional shelf off which leaders can pick and choose which events to exploit and how best to use them.

Not even Hitler used chemical weapons against his own people says the White House Press Secretary, and subsequently all evidence to the contrary becomes a minor qualification. Meanwhile the figurehead of the official "resistance" loses elections not due to her campaign's own failures, but because voters didn't understand that it really and truly was "her turn" (one can clearly pick out, per Brecht's formulation, the desire "To dissolve the people / And elect another"[7]). The British political establishment chastises a popular leftwing party leader as "irrational" for insisting we think long and hard before pushing the red button and annihilating half of humanity. In none of these is there even a faint acknowledgement to the obvious: that the barbarism of the past came from somewhere, from a system and the decisions made in the name of that system. Or, as Brecht puts it close to the end of War Primer, "The womb is fertile still from which that crept."[8]

Several pages into the start of War Primer's new edition - well after those of Hitler experiencing his revelation - is a picture of Friedrich Ebert, the head of the German Social Democratic Party who became the first president of Germany after the emperor's overthrow in 1919. A few pages from the book's back is a headshot of Gustav Noske, Ebert's Defense Minister who recruited the far-right Freikorps paramilitary to obliterate the communist left, murdering revolutionaries like Rosa Luxemburg and Karl Liebknecht and crushing the revolution they had led. Fourteen years later most of the Freikorps would be absorbed into the SS and SA of the Nazis. Many have insisted, and not without reason, that had that revolution succeeded, the world would never have known Hitler.

In the original edition that finally appeared in 1955, the epigram of Ebert was removed entirely and replaced by the one picturing Noske. Brecht had been persuaded to make this change because the ruling Socialist Unity Party was making conscious overtures to former Social Democrats; Ebert's own son, for example was now the mayor of East Berlin.[9] Noske was a far easier foil. Yes it was the elder Ebert who let the bloodhound off the leash in the first place, but this was an inconvenient piece of history, unworthy of regard. Another minor qualification in the name of stability.

This might be, in a fairly meta manner, the most prescient statement that War Primer has to give us: there is an art to treachery. Disentangling it is also an art.

6. See what are arguably Benjamin's best-known pair of essays: "The Work of Art In the Age of Mechanical Reproduction" (1936) and "Theses On the Philosophy of History" (1940). The first of which is key for understanding the difference between the aestheticization of politics and the politicization of aesthetics, the second for grasping as a Marxist the dizzying, uneven pace in which historical change happens and how the radical historical materialist inserts themselves into it. Both must be considered in light of each other and as a whole for fleshing out a viable framework regarding art's role in history.

7.From Brecht's poem "The Solution." Written sometime in 1953 after the defeat of the East German general strike that protested the expansion of military and heavy industry at the expense of food and consumer goods. Published in a West German newspaper in 1959, three years after the author's death, it reveals Brecht's complicated but undeniably dissident relationship with the Stalinist East German state.

This review appears in our third issue, "Return of the Crowd." Purchase a copy at wedge shop.

Red Wedge relies on your support. If you like what you read above, consider becoming a subscriber, or donating a monthly sum through Patreon.

Alexander Billet is a writer, poet and Marxist. He is a founding editor of Red Wedge and has also appeared in Jacobin, In These Times, the International Socialist Review, Marx & Philosophy Review of Books and other outlets. He is a member of Democratic Socialists of America and is active in its recently founded Refoundation caucus. He blogs at Dys/Utopian and Tweets @UbuPamplemousse.