The Assassination of Fred Hampton, Surveillance of Civil Rights Leaders, and Harassment of Black Lives Matter Just Business as Usual for Law Enforcement

The criminalization of drug use was and still is an easy excuse to surveil and control populations. 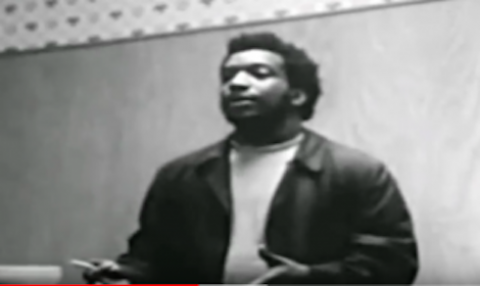 On this day, 49 years ago, 21 year-old Fred Hampton, Black Panther Party of Self-Defense State chairman, was drugged and assassinated of by the Chicago Police Department (with the assistance of the FBI).  Just another day of law enforcement doing its job.

In the United States, the role of all law enforcement is to maintain “law and order” first and foremost.  Moreover, law enforcement, especially the FBI, has historically played a major role in stifling social movements that seek to disrupt or dramatically alter the social order of the US.

From the violent strike-breaking and union-busting of the late nineteenth and early twentieth century, to the surveillance of anti-war and civil rights leaders during the Vietnam era, to the imprisonment of Black Panther Party members and other political prisoners that continues to this day, US law enforcement does an especially good job of quelling the dissidence of oppressed peoples, no matter how peaceful the leader.

Take Dr. Martin Luther King, Jr., for example.  Lauded today as the shining example of peace, equality and the “proper” way to protest, MLK was targeted and jailed by local police and surveilled by the FBI from December 1955 until his assassination in 1968.  Like in most governments, the US government doesn’t take well to unrest, and the creation of laws and their ultimate enforcement are the prime means of subduing any agitation.

The war on drugs is a prime example of this as told in the now infamous quote by Nixon aide John Ehrlichman:

“The Nixon campaign in 1968, and the Nixon White House after that, had two enemies: the antiwar left and black people. You understand what I’m saying? We knew we couldn’t make it illegal to be either against the war or black, but by getting the public to associate the hippies with marijuana and blacks with heroin, and then criminalizing both heavily, we could disrupt those communities. We could arrest their leaders, raid their homes, break up their meetings, and vilify them night after night on the evening news. Did we know we were lying about the drugs? Of course we did.”- John Ehrlichman, Nixon aide

The criminalization of drug use was and still is an easy excuse to surveil and control populations. In the effort to restore and maintain “law and order”, blacks and Latinx are policed, arrested, incarcerated and criminalized at disproportionate rates for drug use and sales, despite the fact that white people sell and use drugs at the same, if not slightly higher, rate.

The collateral consequences of this mass criminalization include the destruction of families, disenfranchisement rates that mirror those of the Jim Crow era, school-to-prison pipelines, the creation and perpetuation of an economic and social caste system, and modern day slavery. Targeted traffic stops, violent SWAT raids and incessant racialized searches, known as stop-and-frisk, in search of drugs are daily reminders that the drug war is the justification to create a police state of black and Latinx communities in order to maintain and control these populations.

Furthermore, the mass policing and criminalization does not stop at local law enforcement.  Just as the FBI labelled the Black Panther Party and other civil rights organizations and leaders “black extremist groups” and surveilled and infiltrated their ranks, the FBI’s creation of the category “black identity extremist” (following the emergence of groups like Black Lives Matter and celebrities like Colin Kaepernick who speak out and protest against police brutality and mass criminalization),  is just history repeating itself.

Moreover, the Trump administration is doing all in its power to be harsher on enforcing our racist drug laws.  Sessions' announcement of $12 million grant funding for state and local law enforcement in an effort to combat the opioid crisis, money that could be better used to increase access to evidence-based treatment, illustrates the longstanding truth: maintaining “law and order” comes before saving lives.

Today, as we remember the life of an electrifying liberator, let us not forget the truth of his death.  Fred Hampton was murdered by the Chicago Police Department while he lie in bed drugged unconscious next to the then-pregnant mother of his child.  The FBI, with use of an informant, coordinated this attack.  His death was an act of police brutality.  His death was government-sanctioned murder.  His death was an assassination.  His death was an execution.

Most of all, his death was law enforcement doing its job.