labor Walmart Will Let Its 1.4 Million Workers Take Their Pay Before Payday

Walmart workers will not be charged interest if they opt to obtain their wages in advance. But getting paid early, while it may solve an emergency cash shortage, will leave the workers with less money on payday. 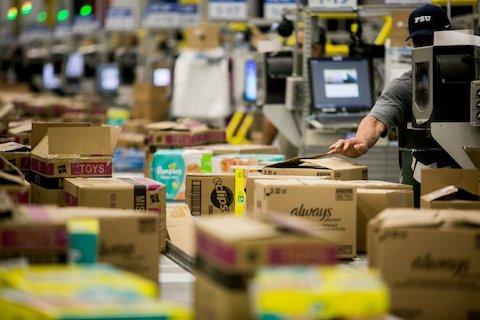 A Walmart fulfillment center in Bethlehem, Pa. The company is offering payday advances — not loans — through an app called Even. Some critics of the retailer’s labor practices say it should raise wages instead., Sam Hodgson for The New York Times

For decades, Walmart has taken heat for how it treats its work force, including paying low wages and creating unpredictable schedules. Now, the giant retailer is trying to ease some of its workers’ financial strain, allowing them to receive wages before their next payday.

Instead of waiting two weeks between paychecks, Walmart workers can now use an app to access a portion of wages for hours they have already worked.

But Walmart’s new service also highlights, albeit unwittingly, the financial struggles of the low-wage workers in the retail and service industries. Even as the economy strengthens, many workers in stores and restaurants are not earning enough to make ends meet.

Walmart said the new initiative is intended to help workers avoid costly payday loans and other debt traps, and reduce the stress that comes with financial hardship.

“We believe this is the right thing to do, and we are happy to champion it,” Ms. McKenna said.

Labor groups say the best investment Walmart could make is not in a new app, but in increasing pay.

“It sounds like this may be a useful service but it doesn’t tackle the fundamental problem Walmart workers suffer,” said Paul Sonn, general counsel of the National Employment Law Project, a labor advocacy group. “Their paychecks are too small.”

Walmart executives say that raising wages alone will not solve the problems many Americans have managing their cash flow. Rather, the company says, the new service is meant to help workers with the broader issues of financial management.

The app, called Even, has been used by other employers, but never on such a large scale as Walmart.

With the new service, every Walmart employee can obtain a portion of his or her earned wages eight times a year free of charge. For most of the workers, the so-called Instapays will be deducted from their next paycheck. The workers can pay extra if they want more than eight Instapays.

The Even app also helps workers manage their finances by pinpointing exactly how much they can safely spend before their next paycheck.

Alexis Adderley, who works nights in a Walmart distribution center in Fort Pierce, Fla., has started using the Even app as part of a pilot program.

At first she was suspicious, she said, that the app was yet another in a long line of financial products like payday advances and “overdraft protection” that end up driving low-income workers deeper into a hole.

But Ms. Adderley, the mother of boys ages 8, 7, 4 and 2, said she had been pleasantly surprised.

The app, which connects to her bank account, calculates how much she pays for housing, food and phone bills and tracks when she makes big monthly payments. With that data, Even provides Ms. Adderley a real-time estimate of how much she has to spend before payday.

She earns $19.25 an hour, more than the average Walmart employee, and works 30 hours a week. But money is still tight, especially since she was forced to leave her home after Hurricane Irma. Earlier this week, the app warned Ms. Adderley, 30, that she had only enough money to safely spend $9.08 before her next paycheck.

“I would love to save more,” she said.

Walmart executives said they learned about Even after reading a New York Times article about the firm a few years ago. The retailer is also working with another tech firm, PayActiv, which facilitates some of the payments.

These partnerships reflect Walmart’s broader effort to make inroads in Silicon Valley, where the old-line retailer is seeking to acquire talent and ideas to increase its digital heft in its battle with Amazon.

Before creating Even, one of the firm’s founders, Jon Schlossberg, had developed an app called Knock, which allows phone users to unlock a Mac computer by knocking on their phone.

Idealistic and flush with money from the success of Knock, Mr. Schlossberg said he began studying how a cash shortage affects people’s physical and mental well-being.

“It is a fundamental problem with the capitalistic society,” Mr. Schlossberg said in an interview.

Mr. Schlossberg, 30, said he set out to create a product that could reduce the stress associated with money problems, joining a crowd of other so-called fintech start-ups seeking to disrupt the traditional banking model.

Walmart pays a small fee to Even to allow workers to withdraw their wages ahead of payday. Workers can take out only a portion of wages that they have already earned during the two-week pay cycle — so technically, Even says, these are not loans.

“You have earned this money,” said Safwan Shah, founder of PayActiv. “Who decides you should get paid every two weeks?”

For years, consumer advocates and regulators have warned about the dangers of using high-interest loans to pay for unexpected expenses.

Walmart workers will not be charged interest if they opt to obtain their wages in advance. But getting paid early, while it may solve an emergency cash shortage, will leave the workers with less money on payday.

“It is still going to be a struggle for most people,” said Alex Horowitz, a senior researcher at the Pew Charitable Trusts who focuses on consumer finance.

Matt Fixel, 29, a Walmart worker in Tucson, lives on the financial edge. He works part time earning $10.20 an hour unloading trucks and stocking shelves. When he ran into trouble paying rent one month, he overdrew his bank account, incurring huge fees. Unable to obtain a credit card because “his credit is just shot,” Mr. Fixel pays for services like Hulu with gift cards.

“That app sounds helpful,’’ Mr. Fixel said of the Even service, but added, “I would prefer it if they gave me more hours.”

Cash flow issues, Walmart executives say, are not just a problem for the poor, but affect a broad segment of Americans. Ms. McKenna cited a survey by the Federal Reserve that showed that 46 percent of Americans would have trouble paying for an emergency expense of $400.

Ms. McKenna said Walmart was making a “reasonably substantial investment” in paying for the Even service for its employees. The company raised starting wages nearly three years ago, and Ms. McKenna pointed out that Walmart has also increased employee training programs that aim to advance workers into management, where they can earn more.

“We continue to look at investing in our associates,” Ms. McKenna said.