The Year in Resistance

Trump became president despite the will of a majority of the American people. A recent poll shows that 53 percent of voters want him to resign. The Resistance has been able to slow but not stop Trump’s agenda. Trump has done more to spur progressive political organizing than Bernie Sanders, George Soros and Saul Alinsky combined. 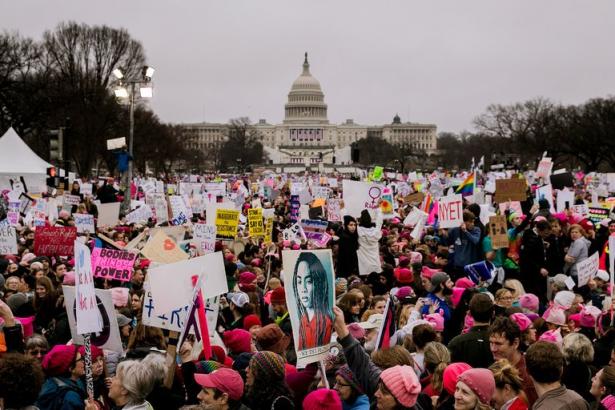 Demonstrators took part in the Women’s March in Washington in January 21, 2017., Credit: Sam Hodgson for The New York Times

The atmosphere in Washington on Jan. 20, the day Donald Trump was inaugurated as president, was rancid. Red-faced people laden with Make America Great Again swag taunted penned-in protesters, screaming, “Crybabies!” and “He’s your president now!” They seemed gleeful that their fellow citizens found this fact degrading, as if the whole point of supporting Trump was to make liberals feel the way racists felt when they had to live under President Barack Obama. One consolation was that, unlike during Obama’s inauguration, it was easy to walk around, because the crowd was so thin.

Yet throughout the joyless day, the news brought scattered intimations of hope. A Southwest Airlines flight from Chicago put on pink lights in the cabin because almost everyone on board was going to the Women’s March. The trains were full of women; so were the buses. And on Jan. 21, it was as though the cavalry had arrived, as hundreds of thousands of anti-Trump protesters poured into the city, while millions more took to the streets nationwide, a sign of how big and determined the Resistance would be.

As this hideous, discombobulating year comes to an end, the Resistance offers one reason for optimism. “A year ago, we were scared that the incoming administration and Congress was going to do a whole bunch of very big things very fast,” Ezra Levin, one of the founders of Indivisible, a Resistance movement organized by congressional district, told me. It wasn’t clear that demoralized Democrats would even try to hold the line against authoritarianism. Trump supporters, Levin said, “were talking positively about the Japanese internment camps at the same time as Democrats were saying they were going to work with Trump on infrastructure.”

The Women’s March helped turn the tide. Then when Trump barred people from seven Muslim-majority countries from coming to the United States, thousands of people rushed to protest at major city airports. (A federal judge would block Trump’s order in February.) When it seemed as if Senator Chuck Schumer of New York, the Democratic minority leader, might try to cut deals with the new president, anti-Trump demonstrators showed up repeatedly in the freezing cold outside his Brooklyn apartment until he agreed to follow their lead.

Throughout February, enraged citizens, coordinated by groups like Indivisible, MoveOn and the Working Families Party, flooded congressional town halls to demand that their representatives save the Affordable Care Act. Repeal, which seemed inevitable in January, failed in July and again in September.

I didn’t fully grasp the scale of the civic revival until I went to Georgia in April to write about the special election to fill the House seat vacated by Tom Price, who had become Trump’s secretary of health and human services. (Like many Trump officials, he has since resigned in disgrace.) Jon Ossoff, the Democrat, lost that race, but the energy of the district’s previously apolitical suburban women was astonishing.

Galvanized by disgust for Trump, they had thrown themselves into local politics, using organizing skills learned in the PTA. I was with some of them the night Ossoff lost, but instead of despairing, they were already planning their next campaigns. In December, they helped the Democrat Jen Jordan win a State Senate seat, breaking the chamber’s Republican supermajority.

Indeed, Democrats have triumphed all over the country, as Trump’s approval rating keeps sinking. The progressive Working Families Party endorsed 1,036 candidates in 2017; almost two-thirds of them won. Due in large part to grass-roots organizing, Democrats won a landslide in Virginia and took Jeff Sessions’s old Senate seat in Alabama.

At the Dec. 8 rally in Pensacola, Fla., where Trump urged people to vote for Roy Moore, the Republican Senate candidate accused of sexual misconduct with teenagers, the president mocked citizens who oppose his administration. “Resist, resist,” he whined, hunching over and pretending to carry a protest sign. “They’re resisting the will of the American people,” he declared.

Of all the uncountable lies of this repulsive regime, this might be the biggest. Trump became president despite the will of a majority of the American people. A recent poll shows that 53 percent of voters want him to resign. Inasmuch as Trump is able to force his agenda on an unwilling nation, it’s because of a breakdown in democracy that renders many members of Congress heedless of their own constituents.

The Resistance has been able to slow but not stop Trump’s agenda. Republicans seem likely to pass their atrocious tax bill, which will exacerbate inequality and undermine the Affordable Care Act while further enriching Trump and his children. The Supreme Court has allowed a third version of Trump’s travel ban to take effect. His administration is attacking professional civil servants in agencies from the E.P.A. to the F.B.I.

But while Trump has given his followers the liberal tears they crave, that victory contains the seeds of its own reversal. Trump has done more to spur progressive political organizing than Bernie Sanders, George Soros and Saul Alinsky combined. The president once warned that if he fell, he’d take the entire Republican Party down with him. Thanks to the Resistance, he might still have the chance.

[Michelle Goldberg became an Op-Ed columnist for The New York Times in 2017. She is the author of three books: “Kingdom Coming: The Rise of Christian Nationalism,” “The Means of Reproduction: Sex, Power, and the Future of the World,” and “The Goddess Pose: The Audacious Life of Indra Devi, the Woman Who Helped Bring Yoga to the West.” Her first book was a finalist for the Helen Bernstein Award for Excellence in Journalism, and her second won the Ernesta Drinker Ballard Book Prize and the J. Anthony Lukas Work-In-Progress Award.

Previously she was a columnist at Slate. A frequent commentator on radio and television, Goldberg’s work has appeared in The New Yorker, Newsweek, The Nation, The New Republic, The Guardian and many other publications, and she's reported from countries including India, Iraq, Egypt, Uganda, Nicaragua and Argentina. She lives in Brooklyn with her husband and children. Follow Michelle on Facebook.  Follow on Twitter ]