As the US media obsesses about Russia’s involvement in the U.S. elections, it is ignoring nearly everything else about the Putin government’s role in the world. But recent warnings from Russian Foreign Minister Sergey Lavrov that the Trump administration is dangerously escalating the North Korean crisis deserve serious attention. 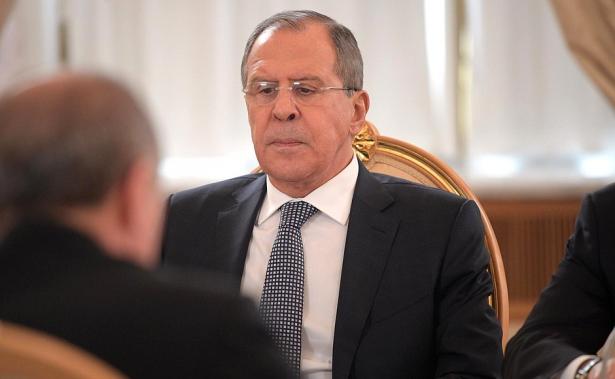 Over the weekend, RT—which the U.S. government has just classified as a propaganda outlet—reported that Lavrov, in an interview with Belarusian broadcaster STV, delivered a strong message about US intentions in the massive air exercises that began yesterday in the skies in and around South Korea.

“While condemning Pyongyang’s nuclear missile adventurism, we cannot but condemn the provocative behavior of our America colleagues,” Lavrov said. “Unfortunately, they are trying to drag the Japanese and South Koreans in the same direction. [These countries] will be the first victims in the event of war on the Korean Peninsula.”

The remarks are significant because Russia has voted twice this year at the UN Security Council to intensify economic sanctions on North Korea in response to Pyongyang’s missile and nuclear tests. They show that Russia, far more than China, could act as a break on US policy in the Asia region and might hold the keys to resolving what has almost become a wartime situation in Washington.

The limits of China’s influence were emphasized at a Washington forum on Friday by Glyn Ford, a former UK Labour Party member of the European Parliament who has visited Pyongyang many times, most recently last month.

“The notion that the North Korean Workers Party is a subset of Beijing’s Communist Party is complete nonsense,” Glyn told the audience gathered at the US Institute of Peace. The United States can’t “push China around like a Third World country.” In a brief interview after the discussion, Ford told me that Russia could play a significant role in Korea because “it has much better relations” with Pyongyang than Beijing does.

The US-South Korea drills known as “Vigilance Ace” began Monday in response to North Korea’s test last week of its most powerful ICBM yet. The launch of the huge Hwasong-15 demonstrated that Kim Jong Un has the capacity to send a rocket more than 8,000 miles and potentially hit any city in North America, according to missile analysts.

Subsequent information, including the sighting from a commercial jet of the rocket exploding and burning up as it entered the atmosphere, have cast doubts on the success of the test. But the reality remains that the North has a formidable arsenal.

“Six F-22s, six F-35As and 12 F-35B jets are new to this exercise,” the Wall Street Journal reported yesterday, emphasizing its unprecedented size. This is the largest-ever deployment of stealth fighters to Korea, the South Korean military said. CNN reported on Monday that the drills “include attacks against a mock North Korean missile launch site and nuclear facilities.”

On Saturday, as the drills were set to begin, National Security Adviser H.R. McMaster turned up the heat by declaring that the potential for war with North Korea is growing. “I think it’s increasing every day, which means that we are in a race, really, we are in a race to be able to solve this problem,” he told a national security conference in California.

He ratcheted up the pressure in an interview with Fox News Sunday. President Trump and the United States “will have to take care of [North Korea], because he has said he’s not going to allow this murderous, rogue regime to threaten the United States with the most destructive weapons on the planet,” McMaster declared. “There’s a real grave danger to China, to Russia, to all nations, by — you know, from a North Korea that’s armed with nuclear weapons.”

Lavrov, in his interview, seemed to indicate that Russia does not accept this view. Last week’s ICBM test, he pointed out, came after North Korea went 74 days without a missile or nuclear test. This was about two weeks longer than the 60 days the Trump administration had said might induce the US into talks with Pyongyang.

According to Lavrov, North Korea’s halt had also been accompanied by signals from the Trump White House to Putin that its next military exercises with South Korea would not happen until spring 2018. The idea of a temporary moratorium on the exercises was boosted by pleas from some South Korean officials for a pause in military exercises during the Winter Olympic Games in PyeongChang in February.

Russia, Lavrov said, “appreciated that and made efforts to work with Pyongyang to turn the [60-day] lull into more lasting stability.” That has now gone up in smoke.

“There was a hint that in this situation, that this natural pause in the US-South Korean exercises could have been used by Pyongyang to avoid disturbing peace, as well, and conditions could be created for starting a dialogue,” the foreign minister said. As summarized by RT, “instead, the US suddenly announced it would be holding the drills in October, then November, then December. That, according to Lavrov, was probably what provoked Pyongyang.”

“There’s a feeling that [the US was] intentionally provoking [North Korea’s] Kim Jong-un to break that pause, to fall for their provocation,” he said.

Even if the drills are not a direct provocation, the unprecedented involvement of US stealth fighter jets could increase the risks of an accidental conflict. “There’s a danger that North Korea could misinterpret” the air drills, Ford told the USIP forum on Friday. “In that case they would have only minutes to make a decision.”

On Monday, Adam Mount, a senior fellow at the Federation of American Scientists for nuclear and defense policy, told the Journal that a single “radar blip or a mistaken field report” by the North Korean military could induce Pyongyang to attack. “Adding stealth and bomber aircraft makes the drill appear less like a defensive exercise and more like a rehearsal for attack,” he said.

But such fears don’t seem to bother some lawmakers pining for US action. On Sunday, Senator Lindsey Graham (R-SC), told CBS News’s Face the Nation that “we’re getting close to a military conflict because North Korea’s marching toward marrying up the technology of an ICBM with a nuclear weapon on top that can not only get to America but deliver the weapon.”

Graham suggested that the US evacuate military families from South Korea because the pre-emptive attack—which he has advocated if North Korea doesn’t back down—is “becoming more likely.” As usual, Graham did not mention the enormous casualties that Koreans would suffered if a war breaks out.

Tim Shorrock is a Washington-based journalist who writes about US national security and foreign policy for many publications at home and abroad. He is the author of Spies for Hire: The Secret World of Intelligence Outsourcing.

Named after veteran journalist Jim Lobe, LobeLog is essential reading for anyone interested in US foreign policy, primarily toward the Middle East. It provides behind-the-scenes investigations, incisive commentaries, and expert analyses from Washington to Tehran and beyond. The first weblog to receive the Arthur Ross Award for Distinguished Reporting and Analysis of Foreign Affairs from the American Academy of Diplomacy in 2015, Lobelog is an indispensable tool for journalists, policymakers, and concerned citizens. It features contributions from former diplomats and government officials, distinguished scholars, and area specialists. Founded by Inter Press Service in 2007, it moved to the Institute for Policy Studies in 2015.