There are 23 million people around the world displaced from the only homes they've ever known. 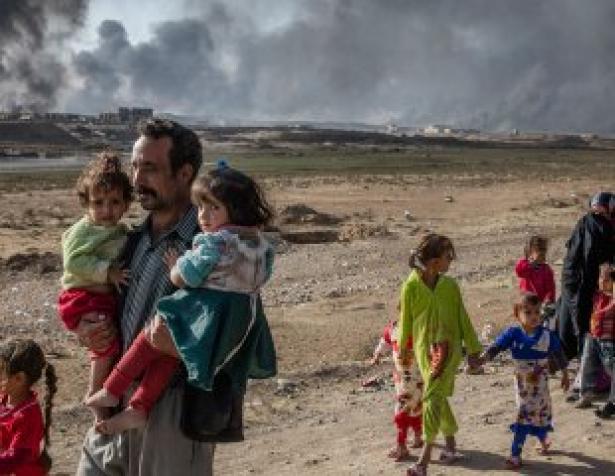 A family displaced by fighting in the village of Shore, 25 kilometers south of Mosul, Iraq. ,Ivor Prickett/United Nations High Commissioner for Refugees

On November 28, Filippo Grandi, the United Nations High Commissioner for Refugees, went before the UN Security Council. Grandi is an old hand in the UN. He came to the UN’s Refugees Agency (UNHCR) from his work as the head of the UN’s agency for the relief to the Palestinian refugees (UNRWA). At UNRWA, Grandi was known as a man of great integrity and sensitivity. The seven-decade exile of the Palestinians moved him. He does not see these matters through the eyes merely of a bureaucrat. He sees them as a human being.

No wonder then that his statement to the UN Security Council was emotional. He mentioned directly the dangerous harm to refugees in northern Africa, particularly in Libya - a country torn to bits by NATO’s war on that country in 2011. Specifically, Grandi pointed to the 17,000 refugees and migrants who sit in detention centers in Libya. He underscored the grotesque violence against thousands of others - several thousand drowned in the Mediterranean, several thousand vanished in the Sahara Desert and thousands in the grip of ‘smugglers and traffickers, protected by well-known militias.’ The situation is desperate. The refugees and migrants - ‘compelled to flee’ - are ‘exposed to appalling harm - including torture, rape, sexual exploitation, slavery and other forms of forced labor.’ This bothered Grandi. This testimony should have moved stones. The impact it had on the members of the Security Council seemed minimal.

In May, Grandi visited some of Libya’s detention centers (or concentration camps, as Pope Francis called them). The harsh conditions evoked strong language. Grandi was appalled that ‘children, women, and men who have already suffered so much should be forced to still bear such grave suffering.’ Doctors Without Borders - which had access to these centers - produced detailed reports in September and October that illustrated the poor conditions. In October, the Assembly Court in Milan - after its own inquiry - agreed that violations of human rights are routine at these centers. This is an important finding because it should stay the hand of Italy, which has been both sending back refugees to Libya and has been working with the Libyan Coast Guard to block refugee movement towards Lampedusa, the Italian port of entry into Europe. In July, the International Court of Justice extended its investigation of human rights violations in these detention centers to include the Libyan Coast Guard. There is an emerging consensus that Italy - it not Europe - is in direct collusion with the production of torturous conditions for the refugees and migrants.

Grandi is an Italian national and so has a stake in the behavior of his own country towards the refugees and migrants. In July, Grandi urged the Italians to do more for the refugees and migrants who crossed the Mediterranean Sea. ‘What is happening in front of our eyes in Italy,’ he said on 1 July, ‘is an unfolding tragedy.’ But, Grandi noted, this is not an Italian problem alone. It is a European problem and ultimately a ‘matter of international concern.’ Already this year 116,000 people have crossed into Italy from northern Africa. The numbers are lower than they have been in previous years, largely because of the extreme steps taken by the Italians and the Europeans to prevent refugees and migrants from getting onto boats. Nonetheless, already this year 3000 migrants and refugees have drowned in the Mediterranean crossing.

The Italians and the Europeans are doing something, but the something they are doing is exactly increasing the danger to the migrants and refugees. The European Union - egged on by the French - have produced a military barrier in the Sahel region of Africa, south of the Sahara Desert. They intend to block the migrants from even getting to Libya. Italian policy in the Mediterranean Sea, with the Libyan Coast Guard, has had the effect of pushing the migrants back into Libya. NATO’s destructive war - in which Italy played a role, although not as centrally as the United States, the United Kingdom and France - destroyed Libya’s institutions and left it prey to the exact forces that are now exploiting the migrants and refugees. These people are being squeezed by European policy between the Mediterranean Sea and the Sahara Desert. Their lives are in the hands not only of the traffickers and the slavers but - crucially - Western politicians.

This is why Grandi, at the UN, said, ‘The International community’s inability to prevent and resolve conflict is at the root of the plight.’ The term ‘international community’ does not apply to all the members of the UN, most of whom are far too powerless to create the conditions for migration or to stop the migrants from moving along. When one speaks of the ‘international community,’ one means the permanent members of the UN Security Council - with special emphasis on the Western powers. They have pushed trade policies that have impoverished the very countries that push out the migrants (cotton subsidies in the West, for instance, has destroyed agriculture in West Africa, notably in Burkina Faso and Mali). The West has pushed for wars of regime change that have exhausted the capacity of previously resilient countries and regions from handling the refugee crisis. Half of the world’s refugees come from Afghanistan, South Sudan and Syria.

I met Grandi in Beirut, Lebanon when he was the head of the UN’s agency for relief to the Palestinian refugees (UNRWA). A man of great sensitivity, Grandi was moved deeply by the plight not only of the Palestinians who have been in exile for close to seven decades but also of those who had been forced to flee from Syria. One of our meeting took place just after Grandi returned from the Yarmouk area of Damascus (Syria). He spoke of the ‘stark greyness of the people’ and talked of his encounter with Um Ahmad, a woman who lived in Yarmouk. Um Ahmad told Grandi that the war in Syria was as bad as the Nakba (Catastrophe) of 1948, but in some ways it was even worse. How could this be, asked Grandi? But Um Ahmad had told him why it was worse. In 1948, the Arab states in the region opened their doors to the Palestinians who had been expelled by the Israeli authorities. But in 2014, no-one was as welcoming. ‘Where do we go?’, asked Um Ahmad. That was the key question. No-one wants to open their arms to the refugees in our times.

Currently, according to UNHCR, the countries that have the largest official refugee populations are Turkey (2.9 million), Pakistan (1.4 million), Lebanon (1 million), Iran (979,000), Uganda (940,000) and Ethiopia (791,600). Many of these are poor countries. They are themselves damaged by the trade policies and wars driven by the Western states. There is no long-term solution for resettlement in these states.

So, the people go towards the West. But the West has dug its moat and fastened its pitchforks.

There is no appetite to address either the relief for the refugees and migrants or the root causes of migration. There is, in fact, relative silence. Currently, 66 million people are considered to be forcibly displaced, while there are 23 million refugees. Of these only 189,300 were resettled in 2016. The rest are in peril. No wonder Grandi is blunt. There has been a hardening of the soul in our times, a keloid growing over our hearts.