The morning after, I felt a fear unlike any I had felt before. The right side of my chest hurt, my stomach felt strange. I was hungry, but couldn’t bring myself to eat. I could just think of one thing: if Donald Trump’s DHS Secretary does not approve our renewals, then we’d potentially be forced to return El Salvador. As of today, I have 81 days left on my TPS work permit if the designation isn’t renewed by DHS. 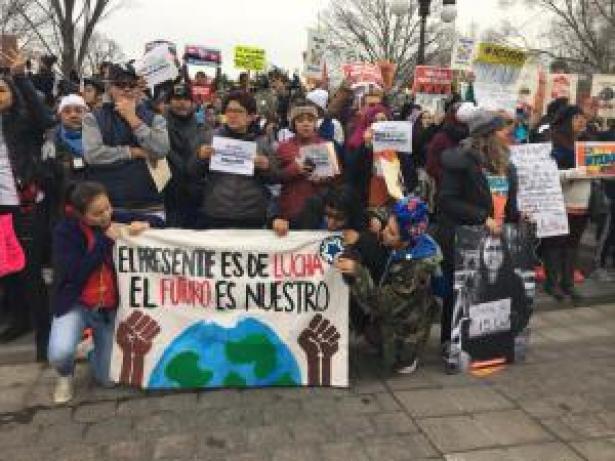 By the time the Deferred Action for Childhood Arrivals (DACA) was announced in 2014, I had already benefited from another immigration relief program: Temporary Protected Status (TPS). In January and February 2001, my birth country of El Salvador experienced two earthquakes – a month apart from each other – that utterly devastated every aspect of life in Salvadoran Society. In order to help El Salvador reconstruct and get back on its feet, the United States extended TPS status to undocumented Salvadorans immigrants already in the U.S. I was one of them.  Created by Congress in the Immigration Act of 1990, TPS was meant for people from countries going through environmental disaster and other extraordinary and temporary conditions or confronting armed conflict. Currently, the program is administered by the U.S. Department of Homeland Security (DHS).

In the past two months, TPS has come under attack from the Trump Administration. In November 2017, DHS terminated the program for Haiti, and four months later it extended that terrible decision to TPS-protected immigrants from Nicaragua and Honduras. Starting January 2019, an estimated 50,000 Haitians, 57,000 Hondurans, and 2,550 Nicaraguans with TPS status will become undocumented. They will be expected to leave the U.S. Furthermore, TPS was allowed to expire for three black-majority countries: Guinea, Liberia, and Sierra Leone earlier this year. None of them were granted a renewal period as the DHS had done in previous years.

From a working-class perspective, terminating TPS would be catastrophic for workers and families. The Center for Migration Studies (CMS) has estimated that 81 to 88 percent of TPS-protected immigrants just from El Salvador, Honduras, and Haiti participate in the labor market – well above the rate for the total US population at 63 percent. Indeed, many TPS workers have been in the US for so long that they’re now homeowners and entrepreneurs, and so they are very invested in their local economies. For example, Salvadorans with TPS must have continuously resided in the U.S. since the designation date of March 9, 2001 – that’s more than a decade of working legally and paying taxes in the U.S. Furthermore, the Center for American Progress (CAP) calculates that the loss of TPS workers would cost employers $967 million in turnover and reduce America’s GDP by $164 billion over a decade. Of course, working people represent more than just economic contributions, but you’d think that reports like these would influence rational policymakers. But this administration operates with little regard to facts, policy briefs by experts, or peer-reviewed research. Instead, it responds to the worst instincts in our politics, even excusing and allying with white supremacy. This is not rational. It is shamelessly racist.

TPS is a racial and environmental justice issue. The program’s primary beneficiaries are Black, LatinX, Asian, and Middle Eastern. We come from Haiti, Syria, Nepal, Honduras, Yemen, Sierra Leone, El Salvador, Somalia, Guinea, South Sudan, Nicaragua, Liberia, and Sudan. All of these nations have historically been at the mercy of imperialist policies – by the U.S. and other countries — that pillage natural resources and do little to promote the well-being of residents, most of whom are people of color. For these countries, TPS was granted on account of either civil strife (usually the reason for Middle Eastern and African countries) and natural disasters (usually the reason for countries in Latin America and the Caribbean) thereby helping these countries rebuild what US Imperialism has destroyed. Thus, TPS is a form of humanitarian relief for civil war refugees and natural disaster victims that is also a form of reparations to formerly colonized working people of the world.

Similar to DACA, TPS beneficiaries like me receive provisional protection against deportation and permission to work in the United States for a limited period of time –no less than 6 months and no more than 18. In order to be eligible, immigrants from TPS-designated countries must be physically present in the U.S. on the date on which the program is designated for their nationality and must continue to reside in the U.S. In addition, the program does not grant permanent legal status in the United States, nor are TPS beneficiaries eligible to apply for permanent residence or for U.S. citizenship. In other words, working-class immigrants can be workers, but not residents let alone citizens.

My TPS work permit has provided me with many opportunities to pursue the American Dream by making it possible for me to join the workforce. It also allowed for me to file taxes – something that I’ve been doing since I was 17 years old. Since attaining full-time employment, I have been saving to purchase a home in Virginia for my mother. This is my greatest dream – the chance to honor my mother’s sacrifice by providing her with a home that she can call her own. Throughout my time living in the United States, I had never thought I’d be faced with the possibility of giving up this dream. Yet all of this changed on November 9, 2016. The morning after, I felt a fear unlike any I had felt before. The right side of my chest hurt, my stomach felt strange. I was hungry, but couldn’t bring myself to eat. I could just think of one thing: if Donald Trump’s DHS Secretary does not approve our renewals, then we’d potentially be forced to return El Salvador. As of today, I have 81 days left on my TPS work permit if the designation isn’t renewed by DHS.

Since the beginning of December, a number of actions have taken place in Capitol Hill to urge members of Congress to save TPS and pass a Clean Dream Act. The deadline for Congress to act is December 22 – the date Congress adjourns for the holidays. The urgency has escalated even more after Congress failed to include protections for immigrant youth in their spending bill fix. If Congress doesn’t act soon, then a number of Dreamers and TPS beneficiaries await deportation and an inhumane removal experience from US society.

As we have seen in recent years, more and more of our working-class brothers and sisters from the global south have had to flee civil war, genocide, economic exploitation, and the environmental effects of climate change – and that will almost certainly continue. Efforts have already begun to eliminate other venues for legal immigration, and the gradual termination of TPS is unlikely to be the end of the assault on immigrants under this Administration. If naturalized and documented allies do not step up to demand a comprehensive immigration reform that makes it easier for all workers, political asylees, climate change refugees, and persecuted people to pursue new beginnings in the United States, then we will forsake our responsibility to whose labor provided the capital to build the economies of developed nations.

[Jessica F. Chilin-Hernández serves as Assistant Director of the Kalmanovitz Initiative for Labor and the Working Poor at Georgetown University. She is originally from San Salvador, El Salvador.]