Thanks to strong bargaining power, the IG Metall union, which represents some 3.9 million workers in the metal and electrical industries, is pushing for a 6% wage increase and a 28-hour week for a two-year period — with limited impact on wages. 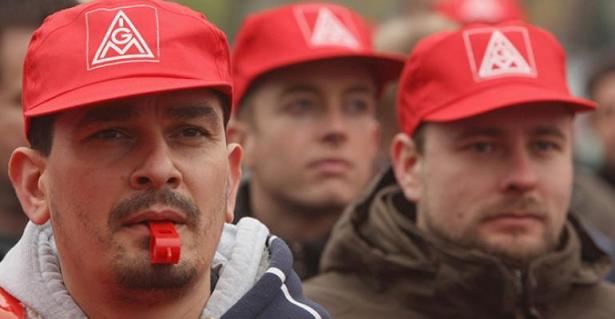 BERLIN — Germany’s largest union is bracing for a combative start to the new year as it presses demands for a 28-hour working week, warning employers to expect mass strikes in the battle for a better work-life balance.

The mighty IG Metall union, which represents some 3.9 million workers in the metal and electrical industries, says it is ready to flex its muscles after initial negotiations with employers made little headway.

“If by the end of January the employers have not changed their stance, we will consider resorting to 24-hour strikes or calling a vote for a general strike,” Hofmann told DPA news agency this week.

Seeing its bargaining power strengthened at a time of bulging order books and record-low employment in Europe’s top economy, the union is pushing for a 6% wage increase. The Gesamtmetall employers’ federation has so far offered 2%, setting the stage for both sides to meet somewhere in the middle.

Far more controversial is IG Metall’s call for employees to be allowed to switch to a 28-hour week for a two-year period — with limited impact on wages. That demand has been met with fierce resistance from company bosses, and stirred wider debate about quality of life and the future of work in booming Germany.

In certain circumstances, IG Metall says reduced working hours must not go hand-in-hand with a drastic salary cut — for instance when staff are caring for young children or ailing relatives. In those cases, the union wants employers to top up workers’ salaries to help make up for the shortfall that comes with clocking up fewer hours.

It also wants employees to be guaranteed a return to a 35-hour week after two years.

“I think IG Metall’s proposal is very modern,” professor Gustav Horn of the Hans-Boeckler Foundation think tank told the Nordwest Zeitung daily. He said it would inevitably lead to higher costs that would hurt the bottom line, but could also be a way for firms to hold onto their best workers.

“In future, well-qualified employees will select those companies that offer flexible hours that suit their lives at that time,” he predicted.

But Holger Schmieding, chief economist at Berenberg bank, said a shorter week would mainly hurt small and medium-sized companies who could struggle to meet production targets.

“If it would be replicated throughout the economy, it could do serious damage,” he said, in a nod to IG Metall’s track record of paving the way for major changes to the work environment.

IG Metall, which represents the powerful car and machine manufacturing sectors so crucial to Germany’s economic success, led the campaign for a 35-hour week in the 1990s. But this time, it is pushing for a radical rethink on part-time work.

“The time has come for workers to demand more self-determination to adapt working hours to their personal situation,” Hofmann told reporters in October. He said the trend for more flexible working hours in recent years had mainly benefitted bosses who got staff to work longer days.

The Gesamtmetall employers’ federation has slammed IG Metall’s demand for less work at roughly the same pay as “too costly” and “unfair”.

It says employees already have the option of working part-time if they wish, with a pay packet to match.

“Our rule is: if you work more, you earn more. If you work less, you earn less,” Gesamtmetall chief Rainer Dulger said in a recent interview with regional media. He added that the proposed measure could lead to a shortage of skilled workers in sectors crucial to the country’s economy.

IG Metall has hit back at the criticism, saying firms were losing out on skilled workers by not meeting their needs, particularly among the female workforce.

The controversy is likely to spill over into politics in coming weeks, as Chancellor Angela Merkel’s conservatives head into negotiations with the Social Democrats on forming another coalition government.

Former labour minister Andrea Nahles, who will be a main negotiator for the Social Democrats in the upcoming talks, has already said it was “a good thing” that IG Metall was putting working time at the heart of its demands.