Jeff Sessions Is Preparing a Brutal Crackdown on the Cannabis Industry

Unless Congress stops him, Sessions is about to turn thousands of Americans into federal criminals. 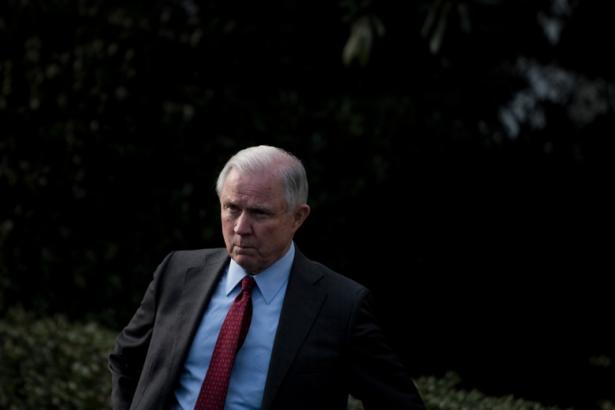 Attorney General Jeff Sessions on Thursday released a memo rescinding previous guidance on federal enforcement of marijuana prohibition, one which is couched in ambiguity and diffidence. It does not direct prosecutors to immediately crack down on the cannabis industry in states that have legalized pot, nor does it explain how the Justice Department plans to enforce the federal marijuana ban. But don’t be fooled by this hazy reticence. The Trump administration is going to go after cannabis. And unless Congress stops him, Sessions will use his authority to intimidate, harass, and imprison thousands of marijuana users, growers, and distributors.

Sessions’ memo rescinds Obama-era guidance designed to let states experiment with legalization. Most notably, Sessions rescinded the Cole memo, a document issued in August 2013 that directed federal prosecutors to focus on “enforcement priorities”—trafficking, drugged driving, sale to minors—in states that legalize. The Cole memo provided a great deal of stability for the cannabis industry: So long as marijuana companies complied with state law, they could generally avoid federal prosecution.

Since then, states that legalize have strived to remain “Cole compliant” by strictly enforcing their own marijuana laws. This summer, the governors of Colorado, Oregon, and Washington sent Sessions reports on their states’ Cole compliance, providing detailed analyses explaining and defending their regulatory schemes. Sessions responded with threatening letters insisting, falsely, that these states were falling out of line with the Cole memo.

At the time, Sessions appeared poised to crack down on the cannabis industry by alleging that states had grown overly lenient in regulating marijuana within their borders. In his letter to the governors, Sessions wrote that the Justice Department “remains committed to enforcing” the federal ban on cannabis, a “dangerous drug.” He also noted that the Cole memo permits “investigation or prosecution” of the cannabis industry, even when it complies with Cole. These words seemed design to reframe the Cole memo as a flexible suggestion rather than a firm policy.

But Sessions ultimately did not decide to renterpret Cole to allow more prosecution of the cannabis industry. He rescinded it altogether, with no advance warning, abruptly withdrawing the safeguards that had allowed legal cannabis to flourish. Yes, his own memo suggests that individual prosecutors need not emphasize marijuana-related charges. But the signal from the DOJ is clear as can be—the attorney general is ready to see more pot prosecutions. Indeed, Sessions’ timing was no coincidence; he almost certainly wished to send an ominous message to California, which began permitting recreational cannabis sales on Jan. 1. The state’s marijuana growers and distributors will now have to contend with a precarious legal regime as they get legal recreation production and sale off the ground.

More broadly, Sessions’ move will inject a huge amount of confusion and uncertainty into the nationwide cannabis industry—which generated $6.7 billion in revenue in 2016, and employs as many as 230,000 people. (That’s roughly three times more people than the U.S. coal industry employs.) Investors may withdraw; banks may abandon clients in the industry; landlords may refuse to rent out spaces to distributors; employees may quit, fearing federal prosecution. Marijuana stocks have already plummeted, scaring away many potential investors that the industry needs to continue thriving. This collapse in the stock market is especially portentous, because the Justice Department has yet to issue a marijuana-related charge since the Cole memo’s demise. Stakeholders are clearly skittish, just like Sessions wants them to be.

What comes next? Prosecutions—big ones. Eight states and the District of Columbia have legalized marijuana for recreational use. In light of state law and the Cole memo, growers and distributors have made no effort to conceal their businesses. They’re sitting ducks. Federal prosecutors can easily charge them with possession, distribution, even racketeering. Participants in the cannabis economy face decades in prison for doing their job. Prosecutors could also go after individual users who obtain their marijuana openly and lawfully, scaring customers back to the black market, which will undoubtedly prosper from Sessions’ move.

Congress can, and should, forestall these consequences in a few different ways. First, Congress can simply prohibit the DOJ from spending money prosecuting those who comply with state-level recreational marijuana laws. Congress has already done exactly that for medical marijuana, barring the Justice Department from targeting medical users, growers, and distributors who follow state law. It could easily do the same for recreational cannabis, as well.

Second, Congress could reschedule marijuana. This update is long overdue. Currently, marijuana is a Schedule 1 substance, alongside heroin. That’s ridiculous. Schedule 1 drugs have no medical use and high potential for abuse—neither of which is true for marijuana. A lower schedule for the substance would lessen penalties and permit more medical trials.

Third, Congress could repeal the federal ban on marijuana and leave the issue to the states, while continuing to proscribe unlawful production and trafficking. That’s the best long-term solution to America’s current cannabis conundrum, and it will almost certainly happen within a decade given that 64 percent of Americans think the drug should be legal.

Until Congress takes action, Sessions and his prosecutors—many of them hand-picked by him—have an extraordinary amount of power to penalize the cannabis industry. If the attorney general did not plan to use that power, he could have kept Cole in place or modified its priorities. Instead, he restored the status quo from an era when only two states had legalized. Unless Congress stops him, Sessions is about to turn thousands of Americans into federal criminals.