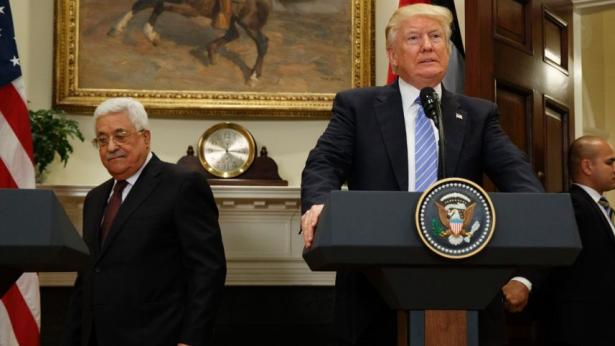 Palestinian President Mahmoud Abbas on Sunday said Israel killed the Oslo Accords and called U.S. President Donald Trump's Mideast peace plan "a slap in the face" during a dramatic meeting in Ramallah on Sunday, adding that "we will slap back."

Abbas said that "today is the day that the Oslo Accords end. Israel killed them. We are an authority without any authority, and an occupation without any cost. Trump threatens to cut funding to the authority because negotiations have failed. When the hell did negotiations start?!"

"U.S. Ambassador to Israel David Friedman is a settler who is opposed to the term occupation. He is an offensive human being, and I will not agree to meet with him anywhere. They requested that I meet him and I refused, not in Jerusalem, not in Amman, not in Washington. U.S. Ambassador to the UN Nikki Haley too, she threatens to hit people who hurt Israel with the heel of her shoe, and we'll respond in the same way."

The Palestinian Central Council convened against the backdrop of U.S. President Donald Trump’s December 6 announcement declaring Jerusalem to be the capital of Israel and the unprecedented rift this caused between the Palestinian Authority and Washington.

“The Arab League’s foreign minister accused the Palestinians of not protesting sufficiently against Trump’s decision to recognize Jerusalem as Israel’s capital," Abbas said.

"We are a people who went out for non-violent protests following Trump’s recognition [of Jerusalem as Israel’s capital], and the result was 20 dead, more than 5000 wounded, and over 1000 arrested, and they have the gall to say that the Palestinian people didn’t go out into the streets," he continued, adding that "I say to the minister, that if he really wants to help the Palestinian people, support us, and give us a real hand. If not, you can all go to hell.”

Abbas then turned to the United Kingdom, saying that “we continue to demand an apology from the British for the Balfour Declaration, and we will continue to demand their recognition of a Palestinian state.” He noted that “Herzl’s phrase ‘a land without a people for a people without a land’ was made up. He arrived here and saw a people, and for that reason, spoke of the need to get rid of the Palestinians.”

Abbas spoke for about two and half hours about how Jews were brought to Israel. He noted that England and the United States participated in the process of bringing Jews to Palestine after the Holocaust, seeking to solve the problem of having Jews without suffering the consequences.

Abbas continued, "At Camp David, they attempted a preposterous exercise. They told the Americans that we were ready to give up the right of return, 13 percent of the West Bank, and provide a Jewish prayer space at the Al-Aqsa Mosque.

"Our stance is a Palestinian State in the '67 borders with a capital in East Jerusalem and the implementation of decisions by the international community, as well as a just solution for refugees.

"We are for the national struggle, which is more effective because there is no one else we can rely on.

"The Americans asked us not to join the 22 organizations including the International Criminal Court. We told them that we wouldn't join, as long as they don't close the PLO offices in Washington, don't move their embassy to Jerusalem, and freeze building in the settlements. They didn't agree, and as such, we're not obligated to any agreements. We will join those organizations.

"We accepted 86 decisions in the UN Security Council for the Palestinians, and none of them were implemented. Another 46 were vetoed by the Americans.

"Israel has imported frightening amounts of drugs in order to destroy our younger generation. We must be careful, and for this reason we created an authority for fighting drugs, and are investing a lot in sport, mostly in soccer. We already passed Israel in FIFA.

"We will publish a blacklist of 150 companies who work with the settlements, and will publish the names of dozens of people suspected of bribery to INTERPOL.

"Prisoners and their family members are our sons, and we will continue to give them stipends.

"The families of Palestinians killed have the right to turn to the International Criminal Court and to demand justice from the international community.

"We will not be an authority without authority, and an occupation without a cost.

The head of the Palestinian National initiative, Dr. Mustafa Barghouti, said to Haaretz after Abbas’ speech: “The speech made a point. It’s clear that the U.S. is done in its role as the exclusive sponsor of the peace process, and the Palestinians have emphasized that they will no longer accept any external party’s dictates. On Monday, we will draft the conclusion, and I personally will demand that the draft includes the position that we will work to implement a one-state solution with equal civil and national rights for all.”

Hamas attacked Abbas saying that his statements do not represent a consensus among Palestinians.

Sunday’s meeting in the West Bank city of Ramallah — seat of the Palestinian Authority government — is being held with representatives from most Palestinian factions but two important organizations, Hamas and Islamic Jihad, announced that they will not attend, even though they were invited.

Hamas spokesman Fauzi Barhum criticized the decision to convene the gathering in Ramallah, saying that it should have been held in a different country to ensure the participation of senior representatives from all the factions.

Haaretz has learned that in discussions that were held over the weekend both by the Fatah Central Committee and by the PLO’s Executive Committee, a slew of suggestions is being considered; among them is the idea of nixing the Oslo Accords and the security coordination on the grounds that Israel has breached all agreements so the Palestinians are not committed to continue and uphold the accords.

Other elements in Fatah and in the PLO are leaning toward the option of continuing international efforts, especially through the United Nations, the European Union, China and Russia in order to advance international recognition of a Palestinian state along the 1967 borders.

According to Fatah officials, the next Palestinian move would be to implement their demand to make the conflict an international issue and demand that the UN set up a team to resolve it. The United States could potentially be a member of such a team, the officials said, but it cannot be the exclusive mediator of the political process.

Deputy chief of Fatah Mahmoud Al-Aloul said that many Palestinians have high expectations for the central council’s decision. “We must address these expectations, because we are currently standing at the crossroads of the Palestinian national issue.” Al-Aloul added that these decisions are difficult, and will not lead to abandoning Fatah’s friends.

Al-Aloul told Haaretz that the Fatah Central Council makes its decisions independently, and that there are a list of recommendations to be taken into account, including freezing its recognition of Israel.

Decisions made by the council are passed on to the PLO’s executive committee for implementation.

Haaretz has also learned that over the past several days, European and Arab countries such as Saudi Arabia have been applying pressure on the PA and on Abbas in particular not to take game-changing steps and to enable action on the international and diplomatic fronts.

Another suggestion would be asking the UN Security Council to recognize a Palestinian state along the ‘67 borders as well as define PA lands as a country under occupation. Yet another suggestion was to turn to the International Court of Law in order to start legal proceedings against Israel.

A senior member of the PLO’s Executive Committee told Haaretz that despite the dramatic atmosphere Abbas’ associates are trying to create, there is no expectation for game-changing moves.