Lessons From an Immigrant Rights Organizer: We Are Not Our ‘Productivity’

With narratives such as #HereToStay and #IAmAnAmerican, we erase the facts that we're living on stolen native land and that focusing on immigrants' hard work is both textbook ableism and anti-Blackness. 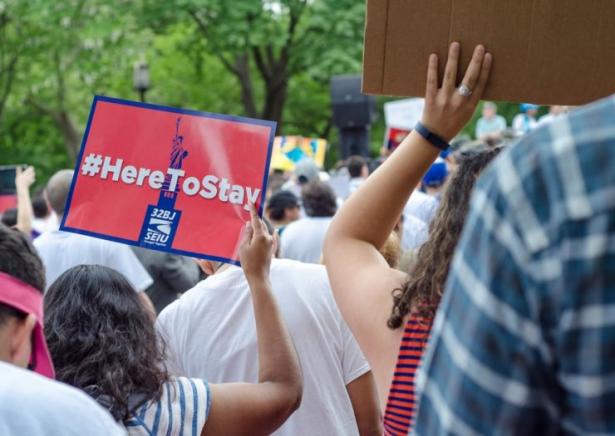 During a May Day 2017 rally in Washington, D.C., a participant holds a sign with the "#HereToStay" hashtag, which is a powerful yet problematic slogan of the immigrant rights movement. , Lauryn Gutierrez/Rewire

When I started organizing as part of DREAM Act mobilization in 2010, I had high hopes: I thought the act would be my way out of poverty, fugitivity, and uncertainty. But I never thought: At the expense of whom?

Back then, I lived in fear, which prevented me from slowing down and contextualizing systems of oppression like colonialism, anti-blackness, and patriarchy. My fears were about basic needs: living without heat in another Boston winter, fear of not being able to afford the $1.50 bus ticket, and so on. The fight for daily survival was all-consuming, and these fears made me want to trust the DREAM Act’s promises of a pathway to citizenship for undocumented immigrants who entered the United States before age 16.

I’ve learned a lot about fear since then: I’m a bit more skeptical about trusting proposed policy and a lot more reflective about the mistakes I made as an organizer and strategist in the immigrant rights movement.

As the DREAM Act gains new momentum in light of the Trump administration’s push to end the Deferred Action for Childhood Arrivals (DACA) program—which made it legal for nearly 800,000 undocumented people to work, travel, and get an education in the United States—I am reflecting even further. I am now asking: Who do we allow to speak? Who is silenced? And how are popular hashtag-narratives such as #HereToStay and #IAmAnAmerican (used by immigrants and MAGA-spouting “patriots” alike) doing harm?

I pose these questions because seven years ago, I invoked similar narratives to #HereToStay and #IAmAnAmerican without thinking critically about how we are all living on stolen land and how many of the pro-DREAM Act arguments are based on notions of immigrant work and economic contribution. Those ideas thrive on stereotypes of Black laziness; obscure the value of people presumed to have less worth due to disability or trans identity; and ultimately prevent the creation of a truly transformational movement.

For example, the now popular #IAmAnAmerican narrative grew to popularity through the DREAM Act. Young undocumented immigrants were demanded to perform a very particular narrative: a narrative where they insisted that they were brought here at a young age through no fault of their own, and therefore, had assimilated into U.S. culture. The narrative worked to criminalize the family members of undocumented youth, and to vilify the country of origin in which the immigrant came from (the United States v. [insert country]).

The #HereToStay narrative similarly rose to popularity through a perspective of resistance. Many people in my community use #HereToStay to articulate something along the lines of: “I will not be deported.” It’s a powerful message. But it’s also a message that encourages us to ask: At whose expense are we “Americans” and #HereToStay?

After thinking through this question, I have come to realize that the #HereToStay narrative prevents coalition building with immigrants and U.S. Native American communities because the hashtag doesn’t take into account the fact that many indigenous people are going through similar violences. Some indigenous people have no access to tribal recognition, resembling the experience of being undocumented/unrecognized, and there are indigenous communities who have been separated through the U.S.-Mexico border or the U.S.-Canada border.

As an Afro-indigenous immigrant, I am not here to stay.

I exist because my African ancestors were kidnapped, transported, sold, and enslaved in Mexico. In many ways, I have no knowledge of where “home” is.

I come from Zapotec Indian land, and I’m a visitor in occupied Ohlone land in California. If I claim that I am #HereToStay, or that I am an “American,” I am making claims to the further occupation of Ohlone land and other indigenous land that has been forcefully taken.

If we abandon the #HereToStay and the “I am an American” narratives, and work with indigenous and Black communities, our liberation will not have to wait.

Indigenous people are currently fighting for the end of occupation. Undocumented people are migrating because their land is occupied too, as many undocumented immigrants are indigenous.

Citizenship Is Not Enough

Black people are fighting to end anti-Blackness, racism, and colorism. The immigrant rights movement, however, does not center Black immigrants and is therefore missing a Black liberation framework, despite the fact that many undocumented immigrants are Black. I can comfortably say this because witnessing the killings of Trayvon Martin, Sandra Bland, and Philando Castile, I have realized that the “citizenship” they had was only symbolic because their lives were not protected. Native Americans are “citizens.” Black Americans are “citizens.” But both of these communities show us that even “citizenship” is not enough.

Furthermore, I thought that my life would change after receiving legal immigration status.

Yes, I have access to a lot of privileges I did not have before such as the access to travel to Mexico for funerals and holidays and the ability to work legally.

However, as a Black body, I move through the world with fear:

Will I be shot for walking too fast?

Will my body be stopped-and-frisked for being too femme?

Will I be criminalized and labeled a “sex worker” if I wear an all-lace outfit at night?

By having to ask these questions on the daily, I know that the ask for “citizenship” is irrelevant to my racialized body. If the immigrant rights movement worked for the liberation, humanity, and reparations of Black and indigenous people, then the undocumented immigrant rights movement will be able to engage in a type of transformational solidarity that uplifts the voices of Black, indigenous and undocumented communities.

Within the conversation of “citizenship,” it is crucial to also talk about the ways in which transgender, gender-nonconforming, and disabled communities are deprioritized in the immigrant rights movement because immigrant bodies are constantly measured on “productivity.” Because of transphobia and ableism, undocumented trans, gender-nonconforming, and disabled immigrants are seen as “bad” immigrants who can’t contribute to society.

The immigrant rights movement needs to center transgender, gender-nonconforming, and disabled leadership because these particular communities can help us divest from measuring our bodies solely on how much capital we can produce for the nation-state.

Centering transgender and disabled undocumented leadership means divesting from narratives like “immigrants: we get the job done,” and “undocumented immigrants contribute to the economy.”

One of the narratives that I perpetuated the most was that of my ability to “produce.”

I perpetuated those narratives because I thought that proving my “value” would assure I got status. It wasn’t until a few years later that I realized that I was measuring my Black body on my “ability” to produce capital—too similar to the ways in which the livelihood of Black bodies were measured during slavery.

The “immigrants: we get the job done” narrative is anti-Black. The immigrant rights movement has benefited from the anti-black idea that African Americans take their citizenship for granted because they are supposedly lazy and on welfare; meanwhile, undocumented immigrants are building the U.S. economy through “hard work” and paying taxes.

I refuse to continue perpetuating a narrative that necessitates the exploitation of Black bodies, and the exploitation of people with disabilities. Not all bodies are seen as worthy because simply put, some bodies cannot “produce” the low-wage labor this country wants and are therefore seen as inconvenient, ungovernable, and disposable.

However, I am committed to having these courageous conversations about how our pro-DREAM Act and pro-DACA arguments have blocked a broad and deep solidarity, because in order to have a sustainable movement, we need to learn how to reflect and identify both our successes and shortcomings.

Once we identify our shortcomings, we are more apt to prioritize the communities that we have unintentionally silenced. It is not too late to reflect, so I leave you with this: I am committed to a transformational immigrant rights movement that prioritizes the needs of Black, indigenous, trans, gender-nonconforming, and disabled migrants. Because even if these communities become “citizens,” their citizenship will only be symbolic.

[Alan Pelaez Lopez is an Afro-Indigenous writer and visual artist from Oaxaca, Mexico. They write about undocumented immigration, Black liberation, LGBQTIA+ issues, and intimate resistance. Check out their website and social media (@migrantscribble).]