White Americans are susceptible to xenophobic and nativist anti-immigrant rhetoric because of the national mythology that their privilege is due to hard work and perseverance. Some immigrants from privileged backgrounds also succumb to this fiction. 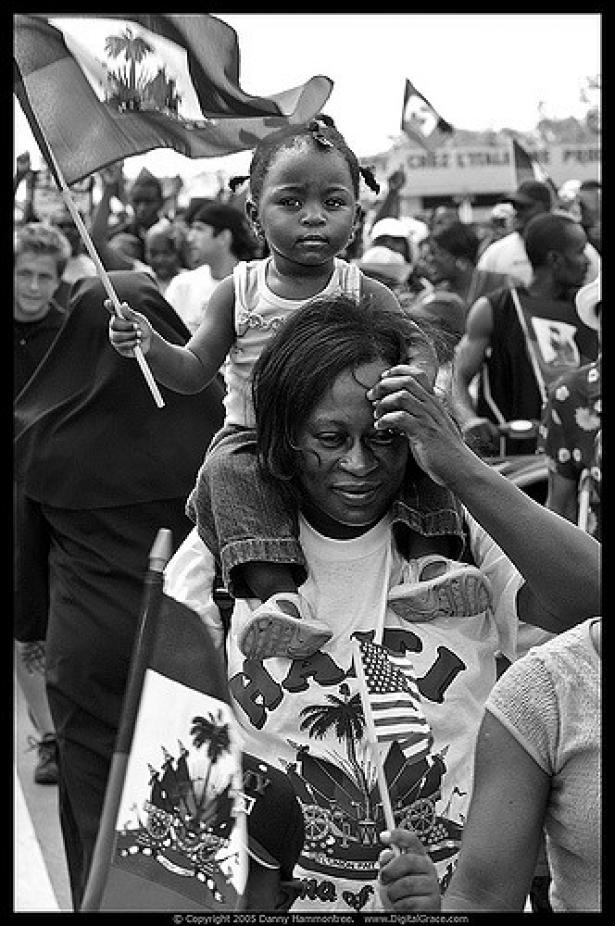 Haitians march through Little Haiti in Miami to protest the discriminatory treatment of Haitian immigrants seeking Temporary Protected Status in the US. ,Danny Hammontree

For most immigrants in the United States, the year that has passed since President Donald Trump's inauguration has been one in which their new country has become an increasingly frightening place to live.

Those of us who are visible as an "other" - having black or brown skin, bearing names that show we are Muslim or Hispanic, wearing clothing that mark us as somehow "different" - are repetitively evoked (in both veiled and vulgar language) in the president's public speeches, private policy meetings, and barrages of tweets.

Trump tweeted earlier this month that he plans to make immigration more "merit-based" to attract "highly skilled" workers and followed these plans up by calling potential and existing immigrants from Haiti and all of Africa, in particular, people from "shithole countries" during a policy meeting.

Part of why Americans are susceptible to this violent, xenophobic, and nativist rhetoric is not because they are exceptionally thick, but because of how the national mythology of the US  - one constructed on Puritan ideals of egalitarianism, "hard work" and perseverance against adversity - is constructed.

Americans are told, since childhood, that hard work and perseverance not only build character, but allow them to overcome obstacles, and achieve their goals and dreams. Because this powerful myth is repetitively drummed into their heads - be it through apocryphal narratives of kids who came from impoverished backgrounds who went on to become multimillion-dollar earning athletes, or women who beat the odds and attained positions of leadership in fields dominated by men - they learn to believe that their country is a meritocracy.

Anyone who has gone thorough the immigration process here knows that US immigration is not only class-based, but underhandedly racist, too: after all, Trump himself remarked, in that same infamous policy meeting, that immigrants from Asia should be favoured over those from Haiti and Africa.

So it baffles me why legislators and pundits are suddenly calling on immigration reforms to reflect the desire for skilled workers, when it is clear, from even a cursory glance at H1B and Greencard application documents, that it is already so.

As an immigrant who was born in a small island in South Asia (Sri Lanka) and grew up in a Southern African country (Zambia), and who now lives and teaches in the US, I make a point of incorporating my own narrative of immigration - the cost, the paperwork, the lawyers' fees, the networks of fellow immigrants who helped me, and the (often difficult to identify) factors and existing privileges in my personal history that allowed me to be a "successful" immigrant - into how I teach my global literature classes.

"It's about money and existing privilege," I laugh. "America sure didn't want any tired and poor immigrants." Most of my American students are surprised - unless they, too, have come from recent-immigrant families.

We all know this to be true, if we are recent immigrants to the US. But we become defensive against racism, and prefer to align ourselves with American rhetoric of being exceptional. And because US immigration policy already selects immigrants who come from privileged social class, caste, and educational backgrounds, this group is used to being seen as elite; certainly, these immigrants do not want to align themselves with workers in the service industries or the undocumented.

I was dismayed, but not surprised, therefore, by the defensive rhetoric used by my fellow immigrants when "Shithole-gate" hit the national and international fans. On Twitter and Facebook, immigrants brought out the weaponry of respectability to prove that racists were wrong about them. Since Haiti and Africa were on the "shithole" list this time, they listed the exceptional African and Haitian immigrants who invented amazing things and discovered incredible surgical techniques that no doubt saved the lives of countless American racists who hated immigrants.

Others touted how so few immigrants, statistically, are involved in any crimes. Articles, like this one in the LA Times, rushed to assure frightened Americans that while many are refugees, and "beneficiaries of the 'diversity visa programme' aimed at boosting immigration from underrepresented nations…African immigrants are better educated than people born in the US or the immigrant population as a whole".

The African Studies Association's Board of Directors released the following statement:

"[In the] US Census Bureau report, Africans account for only 4 percent of the total foreign-born population in the United States, but the educational attainment of that 4 percent far exceeds the average of all of those born outside of the US. Indeed, 41 percent of African residents in the US hold bachelor's degrees or higher. Nigerians, who have been singled out by the president on previous occasions, are among the most educated group in the US, with some 61 percent holding bachelor's degrees and 17 percent masters degrees."

All this is true. But this rhetoric only serves to boost the myth of merit, and further the erroneous belief that only the "deserving" and exceptional - who are mostly exceptional because of existing class, family, political, and educational privileges - should be in the US.

As critic Steven Salaita explained in a Facebook post, cases like that of 57-year-old Palestinian-American business owner, Amer Othman Adi - who has been unjustly held by US Immigration and Customs Enforcement and is currently on hunger strike, "gives lie to the conservative (and often liberal) narrative that 'good' immigrants are welcome … By all accounts, including those of a mayor, a business community, and a congressman, Adi was the ideal arrivant. So, even by the insidious standards of model minority discourse (fuelled by anti-Black racism and Native dispossession), Adi isn't worthy of freedom and dignity. What is left to conclude? That people from certain countries - shitholes - are never acceptable no matter how much they conform to the state's chauvinistic mythologies."

We are nearly all exceptional in many ways, but not because we have class privilege and exceptional jobs - but because of the inventiveness of our hustle, the "I can't go on/I'll go on" ideology, evocative of Irish playwright Samuel Beckett's beautiful, painful writing.

We internalize that struggle, steel, and vulnerability in the face of immigration officials at airports, border checkpoints, local immigration offices, and the everyday racism we encounter. When I read French existentialists, I actually laugh: if they actually wanted to know what it is like to face insurmountable obstacles, they should have first spoken to a black or brown immigrant in the US (or France) first.

It is true that many of the first friends I made in the US were in college because they did have something exceptional about them that parents and teachers recognised; a slew of people - school administrators, guidance counsellors, a friend in the neighbourhood who had an aunt who went to college - helped get them into university by helping them fill out paperwork, write entrance essays, and generally navigate the difficult US tertiary education system and immigrate into the lower rungs of the US middle class.

While the ordinary middle and upper-middle class kid will often have parents and educators advocating for them - protecting the young person from learning difficult lessons even at the cost of their character and skills development - the poor and the immigrant in the US rarely have the benefits of that invisible, protective shield. These experiences of failure and not-making-it are true, unexceptional, and the norm; yet, they are unincorporated into the US's popular narrative.

Those who have gone through this expensive and Faustian processes of an H1-B application, Permanent Residency or "Greencard" process, and eventually, US citizenship, know how ludicrously and nakedly class-based, racist, and violent it is towards immigrants. It is especially so for women of colour.

This system clearly favours those with existing economic, class, gender, and privileges that pipeline them into college educations. Those of us from urban centres, rather than rural areas, from nations with thriving education systems, from families with existing wealth and political power, and those from ethnic groups that are in ascendancy get ahead.

US visas and immigration processes favour those with money in hand, to pay for those exorbitant application fees, a requirement at every step of the immigration and naturalisation process. Yet, if I suggest that the US is not a meritocracy, my students react in disbelief, and many sweetly try to convince me otherwise, using the examples of the miraculous achievements of the authors we read in class.

When I point out that the problem with a meritocracy is that only those who are truly exceptional - like the authors we read - who will "make it" out of dire circumstances, there is silence. When I point out that none of us would have a chance, should we have been born in more dire circumstances, since no one in class (including me) is truly as exceptional as any of the authors we read, there is more silence.

These are some of the few moments in which I have felt that I have communicated something of importance about how structures in the US work - creating at least some doubt about powerful and pervasive mythologies that serve only to blame those who cannot claw their way out of circumstances meant to make them fail.

The truth is, anyone who plots, schemes, saves, and works to the point of exhaustion - sometimes only with the hope that the next or even the third generation will benefit - in an economically and politically powerful nation like the US has to be exceptional, in some way.

It is obvious that (white) Americans need to be disabused of the notion that the US's white population is special, and deserving, somehow, of privilege; it is time to get over the belief that they only received their privileges from having worked for it.

But just as importantly, those immigrants of more privileged backgrounds - those who are currently touting the percentage of people from their national group who have college and post-graduate degrees, as if waving these statistics and their material possessions are ways of proving that they are not, in fact, deserving of Trump's racism - also need an antidote for their misplaced smugness.

It is time that Asian immigrants in particular - who benefit from the Civil Rights Movement and the efforts of African Americans towards changing and challenging racist immigration laws that excluded Asians, and who have, as a group, been favoured since American immigration began moving towards a merit-based system - also stop imagining themselves as more special and deserving than US minorities of non-recent immigrant backgrounds.

Our class snobbery, carried over from our old countries, and defensive superiority, developed against the racism of our new country, has only aided white supremacists who couldn't care less about how exceptional we are.

[M Neelika Jayawardane  is an Associate Professor of English at the State University of New York-Oswego.]