This past year in Louisiana’s St. John the Baptist Parish, a small group of residents began organizing their community to compel the state to protect them against an invisible menace: the air they breathe. Their parish, the Louisiana equivalent of a county, is situated in what’s known as Cancer Alley, an industrial corridor between Baton Rouge and New Orleans that hosts more than 100 petrochemical factories. 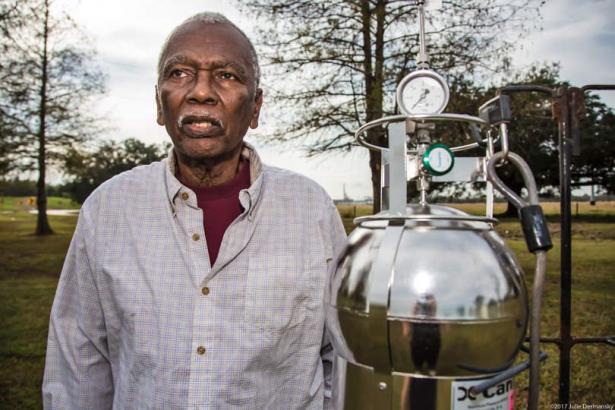 Robert Taylor next to one of the EPA air monitoring sites in LaPlace, Louisiana., Julie Dermansky

At the helm of the battle is the Concerned Citizens of St. John, a diverse group of parish residents pushing back against the area’s historically bad — and worsening — industrial pollution. “One thing we all have in common is a desire for clean air,” the group’s founder, Robert Taylor, told me. Next year, the burgeoning group plans to get political and broaden its reach by banding together with similar groups in the region.

Taylor, a 76-year-old retired general contractor, recently spoke to me about the group from California, where he spent Christmas with his wife, who is recuperating from a stroke. Their extended family insisted Taylor keep his wife away from the Louisiana parish’s polluted air.

Coming Together for Cleaner Air

Taylor formed the Concerned Citizens of St. John after he and others learned that the U.S. Environmental Protection Agency (EPA) determined residents in their area were at higher risk of cancer than anywhere else in the country. The EPA's latest National Air Toxics Assessment, which evaluates air contaminants and estimates health risks, revealed that residents in six parish census tracts closest to the Denka Performance Elastomer factory in LaPlace have a lifetime risk of cancer from air pollution 800 times higher than the national average.

Denka’s LaPlace factory, formerly owned by DuPont, emits chloroprene and 28 other chemicals used to make the synthetic rubber commonly known as Neoprene. In 2010 the EPA reclassified chloroprene as a likely human carcinogen, but this fact only came to the community’s attention at the end of 2016.

The Concerned Citizens of St. John group holds bi-weekly public meetings at the Tchoupitoulas Chapel in the town of Reserve. At meetings throughout 2017, Wilma Subra, a technical advisor to the environmental advocacy group Louisiana Environmental Action Network (LEAN), reviewed the results of EPA air monitoring from six sites in the parish, which she will continue this year.

After the EPA’s concerns became public, Denka agreed to cut harmful emissions by up to 85 percent. Yet a year after air monitoring began, pollution levels were actually worse at five of the six sites. And that was despite the plant making costly improvements due to an agreement with regulators, according to CNN. On December 19, at the group’s last meeting of 2017, Subra went over the latest EPA data: Chloroprene emissions are, at times, still well above EPA-recommended standards.

As I documented Concerned Citizens throughout 2017 for DeSmog, I watched it grow into an advocacy force to be reckoned with — a unity and power they acknowledged at a Christmas celebration following their last meeting.

“The group had some growing pains over the course of the year, but we are now stronger than ever,” Taylor told me. “Our group can’t be influenced by anyone, which makes us dangerous.”

All Politics Is Local

In 2018 Concerned Citizens plans to find and back candidates to run for local offices in order to replace the politicians who brushed off their concerns in 2017. “Block by block, precinct by precinct, we are planning to choose candidates who will represent our interests over the industry’s,” Taylor said.

Geraldine Watkins, a 76-year-old great grandmother and member of Concerned Citizens, is considering running for office herself. Protecting the children who are forced to breathe the parish’s toxic air has become her life’s mission.

She has no intention of giving up the fight for clean air until Denka adheres to the EPA’s  recommended emission standard of 0.2 micrograms per cubic meter, a figure printed on the red t-shirts the group wears.

The EPA emissions limits are determined with the goal of keeping the cancer risk from air pollution to less than one in every million people. When that goal is not achievable, the agency sets standards based on the “upper limit of acceptability,” which is a risk of 100 in a million people. That figure is the basis for the EPA’s 0.2 micrograms per cubic meter standard in St. John the Baptist Parish.

Denka and Dr. Chuck Brown, the state’s top environmental regulator, have challenged the EPA’s findings. Watkins and the other members of Concerned Citizens say they have no reason to believe the EPA got it wrong.

Though the EPA declined to comment when I asked if there were any problems with its findings on chloroprene, citing it as an open case, CNN reported that an EPA spokesperson said the science behind the agency’s findings was solid.

“We appreciate that the EPA warned us about the chloroprene,” Watkins told me, but it is clear to her that she and other parish residents “are mere guinea pigs in the scheme of things. The lack of action by the government since the EPA’s findings were released makes it complicit in allowing Denka and DuPont to poison us.”

In the new year, in addition to entering local politics, the Concerned Citizens of St. John also plan to form an alliance with other citizens groups in Cancer Alley which are also standing up to pollution.

“I’m not just fighting for myself. I’m fighting for everyone in the parish, especially the children,” Watkins said.

Julie Dermansky is a multimedia reporter and artist based in New Orleans. She is an affiliate scholar at Rutgers University’s Center for the Study of Genocide and Human Rights. Visit her website at www.jsdart.com.

The DeSmogBlog Project began in January 2006 and quickly became the world’s number one source for accurate, fact based information regarding global warming misinformation campaigns.