Our Movements Are Greater Than Trump

Organizing for the long haul. 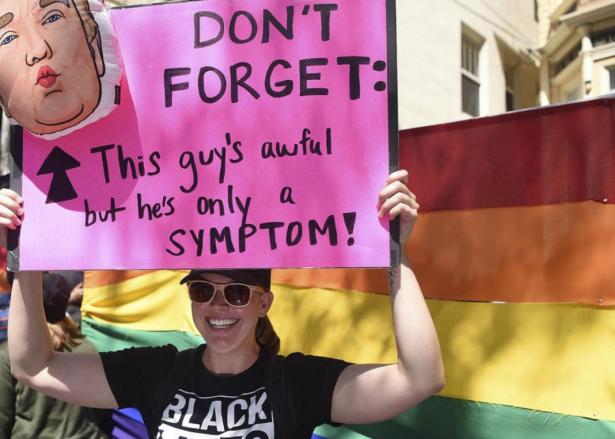 President Trump and thousands of other designated world leaders arrived in Davos, Switzerland this week for the annual World Economic Forum (WEF). The last sitting US president to attend was Bill Clinton twenty years ago.

The WEF is where the elites cut deals and hatch schemes together to enrich themselves. It appears to be working; the new report by Oxfam found, “Eighty two percent of the wealth generated last year went to the richest one percent of the global population, while the 3.7 billion people who make up the poorest half of the world saw no increase in their wealth.”

This year, thousands of protesters also showed up in Davos, despite deep snow,  a ban on protests and the heavy presence of the Swiss military. About twenty people broke through police barriers to get close to the conference center where the meetings are held. There were also large protests in other Swiss cities.

The protests focused on President Trump this year, perhaps because he is an extreme example of the billionaire class in power, but participants said they would demonstrate whether Trump attended or not. As they do each year, the protests called for democracy, an end to capitalism and action on crises such as climate change and wealth inequality. 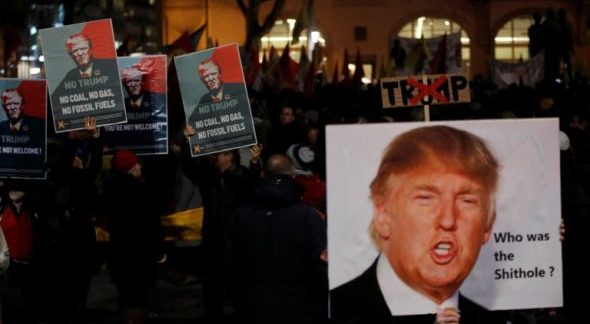 Jerome Roos of Roar Magazine reminds us that the current political system has been deteriorating for some time and will continue on this path after Trump leaves office. It is necessary to understand the roots of the crises we face and to do the hard work of building effective and lasting resistance.

Roos makes three critical observations about the first year of the Trump presidency. First is that Trump is relatively powerless within larger political systems. Rather than being an alternative to the status quo at home, he is serving elite interests well – placing his wealthy friends in positions of power and passing a large tax cut for the rich. Abroad, he has been ineffective at halting the decline of the United States’ global status. In fact, some could argue that he is hastening it by alienating other world leaders.

Second, Roos notes that far from being the “#Resistance”, Democrats are all talk and no substantive action. The Democratic Party and its operatives are working to focus people’s attention on Trump as the cause of the problem. This serves their strategy of hoping to win more elected positions in 2018 and 2020, as well as hiding the fact that the Democratic party is also composed of and serves elite interests. It avoids shining a light on their complicity in escalating military aggression, the wealth divide and the climate crisis.

And third, Roos explains that the same barriers Trump faces, an unfriendly media, political machinery and established institutions, will be impediments to our attempts to create transformative change. To succeed, we must build a grassroots structure, new institutions and an effective grand strategy. The work will need to be rooted deeply in impacted communities and have a deeper analysis of the crises we face. 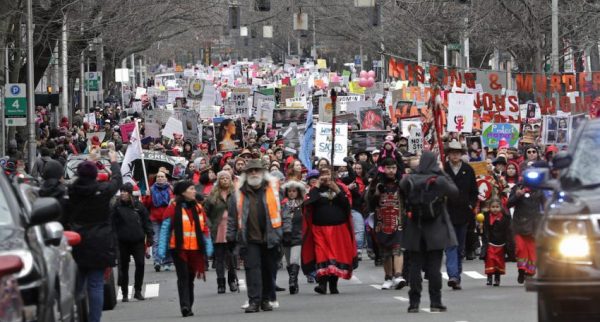 Lessons from the Women’s March

Last weekend, women’s marches were held across the United States, with solidarity marches in other countries. Hundreds of thousands of people marched on a broad range of issues. Many marchers were inspired to action by the election of President Trump, but Trump is merely a more obscene manifestation of an existing dysfunctional system.

In 2017, some women’s issues that have been struggling to gain attention reached a Take Off point; they entered the national dialogue. One issue is sexual violence. Women have tried for decades to raise this issue into the mainstream. Activist Tarana Burke, who started the phrase “Me Too”, began her work on sexual violence in 2006. John Zangas writes, “The [women’s] march comes on the wave of the #MeToo movement, which has toppled powerful men with allegations of sexual harassment and assault.”

Another issue is violence against and the disappearance of Indigenous Women in Canada and the United States. The Red Dress Project, an art exhibit by Jamie Black, was launched in 2011 in Canada to raise awareness of the issue. Since then, women have been wearing red dresses in marches across North America to honor murdered and missing Indigenous women.

Women of color have been disproportionately impacted by violence and oppression for a long time. While white women were demanding the right to vote, black and Indigenous women were fighting for the right to be freed and to be considered human.

Organizers for the rights of black and Indigenous women have raised concerns about the Women’s March being another wave of white feminism, which ignores their leadership and different goals. Brittany Oliver, the founding director of Not Without Black Women, criticized the march, saying, “Black women’s issues need to be at the forefront in order for this country to move forward.” A feminist movement that pays lip service to the immediate struggles of black women will be a shallow movement that fails because it doesn’t address the deep interconnections of race, class and gender.

Sarah Sunshine Manning writes that the goals of Indigenous women are different than those of white feminists. Many indigenous cultures are matriarchal. Manning explains, “Settler colonialism brought patriarchy, capitalism, racism and rugged individualism. All of those systems have devastated indigenous nations and cultures. This same interrelated system of power… is responsible for human rights violations across all genders and cultures.” Indigenous women seek to rematriate spaces and the earth to end the current system of power. Manning adds that rematriation “only can happen with indigenous women at the helm.”

The organizers of the Women’s March appear to have different goals than achieving meaningful intersectional feminism and the rematriation of spaces. A look at the team behind the marches shows that they have deep ties to the Democratic Party. The theme of the march this year was #BlueTsunami2018, not “Women’s Tsunami.”  A “Power to the Polls” event to kick off this electoral effort was held in Nevada, a critical state for Democrats in 2018, the day after the Women’s March.

We can expect the march organizers to work to keep the focus on Trump, to offer electing Democrats as the solution to our ills and to attempt to co-opt grassroots movements. Some of the march organizers worked on Hillary Clinton’s campaign, a woman who facilitated the coup in Honduras where US-trained paramilitaries assassinate women movement leaders, the devastation of Libya, which has led to a slave trade, and the murder of women and their families in black and brown countries in Africa and the Middle East.

Perhaps this is one reason why peace was not a prominent issue in the march. Cindy Sheehan, whose son was killed in the Iraq War, wrote about the failure to call for peace, describing how US wars have “killed millions of people including many thousands of our own youth, both women and men. They have resulted in hundreds of thousands returning home injured physically or psychologically. Mothers, wives, sisters, aunts, and other family and friends have been profoundly, permanently, and unnecessarily handed a lifetime of pain and sorrow because of the US war machine.”

While it is tempting for many to focus on electoral politics and hope that we can elect our way out of the crises we face, as Roos writes, we must focus on the long term work of building movements and alternative structures to change and replace current dysfunctional systems. 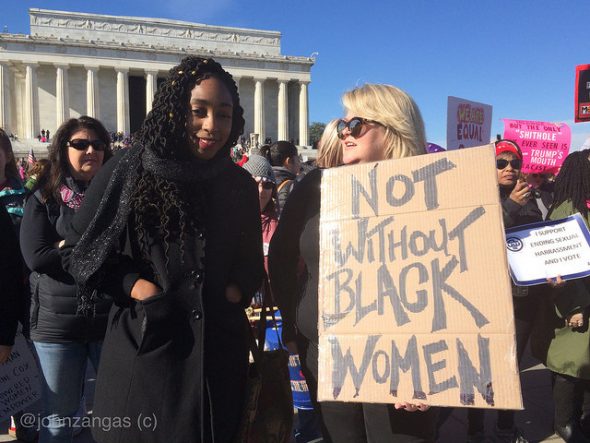 Organizing for the Long Haul

More women are activated, and this is definitely a positive. The challenge is to move them to recognize the deep roots of the crises we face and how to organize in ways that support, rather than marginalize, women who are the most impacted by these root causes.

Nicole Colson described positive signs that Women’s March participants are developing a deeper political analysis. And, she urges radical organizers to participate in the planning and marches to build relationships with people and challenge conventional narratives.

Eileen Flannagan writes about ways to sustain activism for the long term movements that are needed. People need to feel that they are part of a community and that the work they are doing is making a difference.

If we are to make a difference, we urge you to do what you can to build relationships in your community, to share and discuss information about the crises we face and their deep roots, as well as the solutions to them, and to resist efforts to be sucked into mainstream electoral politics. Together, we can build popular power that will effectively challenge the elite power holders.

We invite you to join us for a Facebook Live discussion with the producers of a new film, The Power of Protest, on Wednesday, January 31, at noon Eastern time.