We Are Not Bargaining Chips

We are all fighting to be recognized as citizens of a country where we’ve lived for close to 20 years now, and we also fight to be recognized as human beings. With the president recently expounding his racist view of people from non-white countries, it has become that much harder to hold onto my dream of American citizenship. 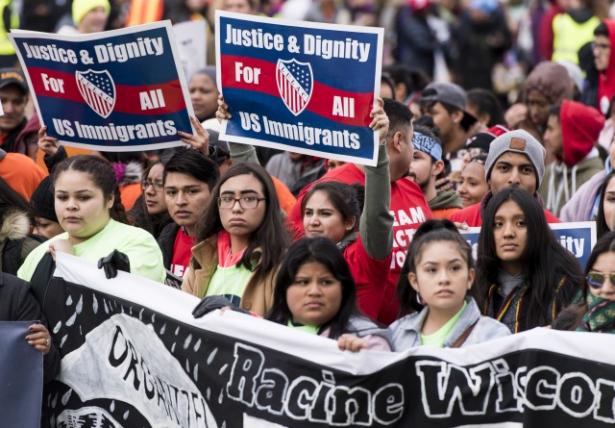 The past months have been traumatizing for Dreamers. Fifteen months, to be exact. On November 8, 2016, I cried alone in my college dorm room as the full weight of America’s ignorance and xenophobia confronted me.

On January 21, 2017, I held my breath as I waited for the new president to drop the hammer on DACA, a policy he fixated on during his campaign and swore to end on “day one.”

On September 5, 2017, the administration finally got around to it. Attorney General Jeff Sessions, touting a host of feeble, erroneous justifications, announced that the president was canceling DACA. It was a crushing moment of anger, frustration, fear, and uncertainty for me, my younger brother, and the roughly 800,000 others who shared our status. His voice still rings in my head.

For me, DACA was a mammoth salvation. It came into my life when I was 26 years old, mired in hopes, dreams, and potential languishing in a deafeningly quiet Georgia suburb. I had graduated from high school seven years before President Obama announced the new policy in June 2012. I had been stuck in the same place, unable to move forward with my life, until that moment. DACA led me to a scholarship, which enabled me to enroll in college where I will graduate this May with my bachelor’s degree. Throughout the past few years of my college experience, no longer wanting to live in the shadows of my status, I enthusiastically joined the Dreamer movement and became an outspoken activist. Now, at age 31, I am part of a group that many news outlets refer to as the “DACA kids.”

We “kids” knew all along that DACA was temporary and offered no path to citizenship or even legal permanent residence. Ironically, then, after Sessions’s announcement, after the feelings of devastation subsided, I entertained a small hope that we were finally going to have a legally binding solution to our limbo state during the six-month period that the administration had established.

Five of those six months have now elapsed, and that solution has yet to materialize. Instead, the battle has evolved from just a legal fight to one in which we must prove our basic humanity in the face of a brazenly racist administration.

We are running out of time. As the days go by and one deadline follows another in the ongoing budget negotiations, those tiny shreds of hope are disappearing. The Democrats, our sworn champions, have made weak promises, one after another, to Dreamers and their families. In efforts to make good on those promises, they have offered up the big beautiful wall, then equivocated. The president and the Republican leaders, however, have rebuffed multiple propositions from Democrats to fund the border wall or more border security in exchange for passage of the Dream Act. Their demands now extend beyond the wall. Now they demand an end to chain migration and the Diversity Lottery program. The Republicans won’t give an inch without taking miles from us by dismantling legal immigration bit by bit—in order to form a more perfect white union.

The White House’s new proposal holds frightening consequences for the future of black and brown folks in America. The message is abundantly clear. Limiting family sponsorship, ending the Diversity Lottery program, closing the “legal loopholes” to better detain and deport immigrants, and allocating $25 billion for the wall—and what do we get in exchange for this sterilized white state? A 10-to-12-year path to citizenship for 1.8 million young immigrants? I cannot wait until I am 43 to enjoy those wondrous benefits!

In response, I will echo some of my fellow Dreamers: We are not bargaining chips and we are not willing to sell out our families and those who have never been “DACA kids.” On their official Facebook page, the National Immigration Law Center writes: “Make no mistake, this is just another ploy to hold protections for immigrant youth hostage to enact the administration's white supremacist agenda. This is not the conversation we're having.”

But a conversation is ongoing and Dreamers are speaking loudly. By the thousands, they have poured into Washington, D.C., over the last few months, storming the Capitol to lobby for a clean Dream Act and permanent protections for their families. They’ve created GoFundMe pages and gotten help from friends and family to travel hundreds of miles to fight for both their livelihood and humanity. They’ve occupied lawmaker’s offices and refused to leave; they’ve rallied, protested, shared their stories at press conferences and on national TV—Dreamers are risking everything in this moment, and it can’t be for nothing.

And what are the Democrats risking? With the latest deadline of February 8, when Senator Mitch McConnell will possibly think of maybe considering a vote on immigration, it feels to me and others that Democrats have been played in exchange for averting the negative optics that come with a government shutdown. I don’t know how to play politics, but I do know that they are playing with our lives. I grow weary of their empty words of encouragement. I fully understand that compromises must be made, and no victory is won without some loss. The latest bipartisan proposal, coming out of the Problem Solvers Caucus, would end the Diversity Visa Lottery, but create a merit-based visa for those from underrepresented countries. However, it prevents Dreamers from sponsoring their own parents once they acquire U.S. citizenship.

There may never be a clean Dream Act, but we need a way out of this limbo.

We are all fighting to be recognized as citizens of a country where we’ve lived for close to 20 years now, and we also fight to be recognized as human beings. With the president recently expounding his racist view of people from non-white countries, it has become that much harder to hold onto my dream of American citizenship.

I was at a recent press conference on Capitol Hill. In the Rayburn reception room, I stood stoically on a raised platform with several other Dreamers. The speakers in front of us included House Minority Leader Nancy Pelosi, Evangelical faith leaders, and two brave Dreamers who had shared their stories. At the end of the presentation, as the VIPs were filing out, Pelosi turned back towards those of us on the platform, shook a few hands, praised our courage and fortitude, then added, “Thank your parents for bringing you.”

I wonder, though, what Pelosi would say to my parents, who live in fear of the ICE Gestapo?

The past several months have been traumatizing for Dreamers. Some of us struggle to go to school and work every day amidst depression and anxiety. I’ve recognized the signs of psychological scars that have embedded themselves within me and may never fade. In May, I will graduate from Pelosi’s alma mater and I hope to someday achieve a level of success such as hers. But my DACA expires in October. And the expiration date of my patience has already come and gone.

[Sadhana Singh is a senior at Trinity Washington University and a former intern at The American Prospect.]