On an island that is reeling, the stakes for schools are high. Gov. Ricardo Roselló has announced that he aims to shutter more than 300 schools amid expectations that enrollment will plunge 10 percent in the coming school year. 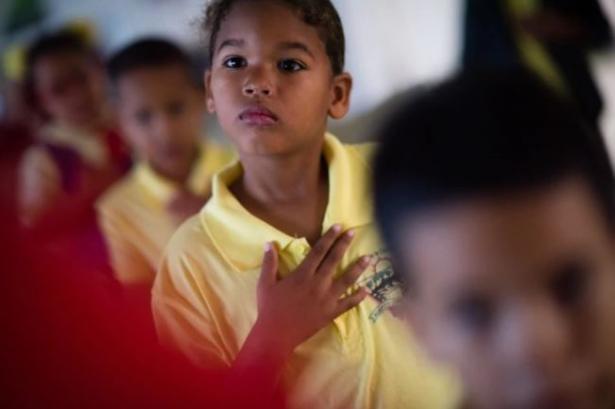 Julio Ortiz, 7, places his hand on his chest as he sings the territorial anthem of Puerto Rico in his first-grade classroom., Sarah L. Voisin/The Washington Post

HUMACAO, Puerto Rico — On a warm January morning, 17-year-old Neida Ortiz Torres awoke in a tent pitched outside her mold- and mosquito-infested house. She walked inside, passing through the living room, where school portraits and academic medals still hang.

In pitch black, she pulled on her school uniform and Converse sneakers, relying on the glow of her cellphone. Then, it was off to the bus stop — past debris and wreckage, and an intersection where a desperate neighbor had scrawled in white paint, “S.O.S. NECESITAMOS AGUA/COMIDA” (“We need water/food”) — and off to a high school still grappling with intermittent blackouts and water outages.

Neida and her 7-year-old brother, Julio, lost so much when Hurricane Maria struck in September — clothing and schoolwork, books and Neida’s anime drawings and then, after the floodwaters receded, days and days of school. Julio did not return to class until late October, and Neida in mid-November. They were lucky. In other parts of the island, children did not return until December, missing nearly three months.

Even then, things were far from normal. Neida’s English teacher left the island after the storm and was not replaced for weeks. Julio’s school still has no power.

“Why can’t I have my life back?” Neida asked.

Hurricane Maria devastated one of the nation’s largest and poorest school systems, a district of about 347,000 students where nearly all qualified for free meals. Even now, the storm hampers the day-to-day operation of schools. By the time classes resumed after winter break, the island’s education department had decided to close 21 schools because of damage or flagging enrollment.

Of the 1,110 that remained open, nearly one-third had no power. More than 25,000 students had fled the island — many without their parents — in search of more stable schooling in the continental United States. Nearly 200 educators joined them, exacerbating a teacher shortage and leaving scores of students unsupervised during parts of the school day. Teachers struggle to get the basic resources they need to do their jobs, shelling out their own money for food when cafeterias run out and for projectors and air conditioners.

“It’s an injustice,” said Aida Díaz, president of one of Puerto Rico’s teachers unions. “We want to give [children] the best, but it’s impossible.”

The floodwaters that swept through Neida and Julio’s home bled into Julio’s school — Escuela Agapito Lopez Flores, a blocky concrete building sandwiched between a lake and the coast. In the storm’s aftermath, teachers across the island were summoned to schools to clear mud and debris and make repairs.

Some converged on Julio’s school, marshaling the support of out-of-work factory employees, firefighters and a National Guard unit. Sonia Vázquez, a kindergarten teacher, wept when she opened the door to her first-floor classroom. The educational toys, the books, the worksheets — all of the odds and ends a teacher accumulates over more than two decades in the classroom — were ruined. Mold had begun to sprout, and rust was eating into the legs of the tiny chairs and tables in her room.

“My classroom was devastated,” Vázquez said.

She began to understand the real toll only when she attempted to track down students. When parents showed up at the school, seeking word of when it would reopen, she would heave a sigh of relief and make a note next to the children’s names — they were coming back. Others arrived with news that they planned to leave the storm-devastated island. In the end, eight of her 22 students departed for the continental United States, and five more ended up elsewhere on the island.

It was a heart-wrenching exercise repeated by teachers and principals across Puerto Rico. Danette Quiñones, the principal of a high school in the city of Rio Grande, said students streamed into her office, lamenting that they planned to move off the island. One student arrived with “tears falling down her face.”

Learning in the dark

Schools without power, such as Escuela Agapito Lopez Flores, mark the start of the day with a teacher ringing a hand bell — a relic that had to be resurrected because electronic bell systems remained inoperable. Puerto Rico is enduring the longest power outage in modern U.S. history, with every aspect of the school day affected on campuses that remain without power. Administrators draft official documents by hand in darkened offices, and students cluster near windows so they can read without straining.

For teachers in the continental United States, where some districts provide laptops and tablets to even their youngest students, conducting the school day without basic technology — or even overhead lights — seems unthinkable. Schools are expected to teach students how to wield technology in their daily lives — how to navigate and conduct research on the Internet, how to compose blog posts and emails, how to judge good information sources from bad. Textbooks and quizzes have migrated online.

None of that can happen in the hundreds of schools where the lights remain off. School computers and projectors are useless. To print out worksheets, teachers haul computers and printers to a nearby Burger King — one of the few spots with electricity and WiFi.

In Julio’s dim classroom, doors and windows must be left open to allow in sunlight and air — but noise and mosquitoes invade, too. His teacher, Sonya Rosario, quizzed the class on what they did during their holiday break. One girl lamented that she did not get as many gifts for this year’s Three Kings’ holiday as the year before.

“In this crisis, when we don’t have electricity,” Rosario replied tenderly, “the most important thing is that we have a lot of love in our family.”

The power outage means Rosario can no longer use her projector, so she used poster board when teaching a story about a boy who got a model train, and then had the children crowd around a pre-charged laptop to watch a video.

Vazquez, the kindergarten teacher, has had to overhaul how she teaches the school’s youngest students. Her day typically involved songs and videos — research shows that 5-year-olds learn best when lessons involve multiple senses. Before the storm, she made regular use of a Smart Board — a projection screen with touch-screen sensitivity — to keep students engaged. One day in January, when she taught a lesson about families in her darkened classroom, she drew silhouettes of family members and had students use tape to affix them to the pricey device.

Trauma has also complicated school for many students, who grow fearful when it rains and have difficulty focusing. Teachers have addressed the storm head-on: Some are teaching the science behind hurricanes, and a high school in Rio Grande assigns students to work on a guide about recovering from a natural disaster, using their firsthand knowledge. Even for young students, the storm was something teachers could not ignore.

“When it rains, they get anxious the school will flood,” Vázquez said. “You have to calm them.”

A system in crisis

In many schools, students linger in courtyards because there are no teachers — not even substitutes — for some subjects. That was a growing problem before Hurricane Maria, with schools in the continental United States turning to the island to find bilingual educators for difficult-to-fill English-language-learner positions, luring them away with higher salaries.

At the Rio Grande high school, about 30 minutes from San Juan, two special-education teachers have left, meaning there is just one to serve 90 students. Only 30 get services. So the rest who qualify for special-education services — such as extra tutoring — go without.

[A tale of two Puerto Ricos: What Trump saw — and what he didn’t]

Vivian Toledo teaches a class at the school that helps students explore job possibilities. The island is in dire need of people who will stay to rebuild, and educators are hoping their lessons will prepare students to stay, rather than join the hundreds of thousands of Puerto Ricans who have to seek opportunities elsewhere.

Before the hurricane, Toledo had students scour the Internet for job advertisements, but without power, her students sat before darkened monitors and clipped ads from newspapers.

“What are the labor needs in Puerto Rico after Maria?” Toledo asked the class.

Her goal was to help them envision a life on the island, and to study accordingly.

“I hope they stay, of course,” Toledo said.

On an island reeling from both a natural disaster and a long-standing financial crisis, the stakes for schools are high. Those that lost significant numbers of students worry they might close. Those fears were confirmed last week when Gov. Ricardo Roselló announced that he aims to shutter more than 300 schools amid expectations that enrollment will plunge 10 percent in the coming school year.

Many of those students who left landed in Florida, the epicenter of the exodus from Puerto Rico.

Schools in Orlando have enrolled nearly 3,000 students from the island in recent months. So many young people landed in the Central Florida city that school districts sent staff to the airport to enroll students and to recruit teachers who had left the island.

Oxzuen Casta Rodriguez, a 16-year-old from Rincón, was among those who made the agonizing decision to leave behind his mother and stepfather to live with his father in Orlando and attend school there.

“The pros being that I’m going to get a good education,” Oxzuen said. “The cons being my family, my friends, the roots that I have in Puerto Rico.”

He shares an immaculate condominium that, like so many in Florida, is hermetically sealed from the tropical heat. He attends Colonial High School, which has enrolled at least 100 displaced Puerto Rican students. The massive school is several times the size of the one he attended in Puerto Rico, and there are other differences: Classrooms are outfitted with the latest technology, every student gets a laptop — and no one worries about power outages.

Oxzuen, a senior, has already been accepted at a community college in Florida.

For those who stayed behind in Puerto Rico, the future seems dimmer.

Neida, who wants to be a gynecological nurse, frets about how she will fare on a critical college entrance exam in February. She’s determined to keep her high academic standing but needs 60 hours of volunteer work. It’s a difficult prospect when she has to rush to finish her homework before the sun goes down.

Eileen Jimenez contributed to this report.

Moriah Balingit writes about national education issues for The Washington Post, where she has worked since 2014. Prior to that, she covered city hall and crime for The Pittsburgh Post-Gazette. Follow @ByMoriah