Aside from the sheer entertainment of the series, Babylon Berlin offers its new American audience the warning it needs in 2018. As the plot progresses, Rath must choose between his morals and nationalism—something Americans struggle with often in the 21st century. But Babylon Berlin shows us how a progressive nation can crumble when it allows bigotry and intolerance to fester. 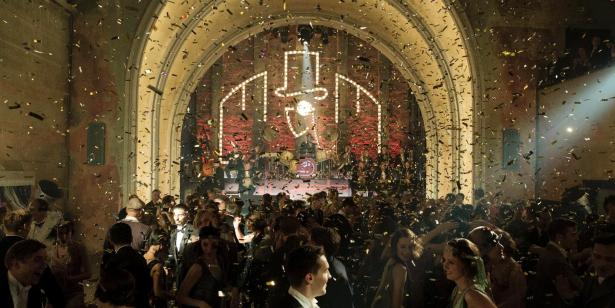 There are dozens of historical documentaries, TV series, and movies that depict World War II, share the stories of the oppressed, and look at the lasting impact of war. These depictions present warnings to us of what happens when bigotry and intolerance spread like wildfire.

But most stories glaze over the “why?” when discussing the rise of the German Nazi Party, in fear of being accused of looking sympathetic toward the men responsible for the deadliest war in human history. German TV show Babylon Berlin, however, doesn’t shy away from giving us an explanation.

The TV series imported from Germany premiered this week on Netflix, although it’s already been televised in Germany and the U.K. The series, which just won best drama series at the German TV Awards, takes viewers back in time to the Weimar Republic in the Golden Twenties. For Americans who might be less familiar with German history, the Weimar Republic was the unofficial designation for the German state between World War I and World War II. Babylon Berlin shines a light on the German capital as it was on the cusp of becoming swallowed up by Nazi propaganda. Extreme poverty, anger, mental illness, partying, and drugs plagued the Weimar Republic as the population was left reeling from war and reconciling with the Treaty of Versailles. Much like biblical Babylon in Christian history, Berlin citizens have become obsessed with worldly things—like sex, alcohol, and drugs—and forsaken God for more surface-level pleasure to cope with their trauma.

The series begins a protagonist and police investigator, Gereon Rath, arrives to Berlin from Cologne, Germany, on a mission to track down a pornography ring that has incriminating footage of Cologne Mayor Adenauer, a social democrat. Rath hopes to destroy the evidence before the local elections begin—the same local elections the Nazi Party in real life eventually wins in 1933.

Throughout his investigations, Rath takes viewers through the depths of Berlin culture during a period when the city was considered radically progressive throughout the world and shows viewers how the city had already begun rotting from the inside. Even Rath himself, a World War I veteran silently suffering from post-traumatic stress tremors, displays the nation’s reluctance to grapple with the lasting effects of war. As citizens fled to nightclubs to party away their PTSD, political factions in every corner of Berlin had already begun radicalizing. For Americans, the series is at times hard to follow—especially during plots surrounding the several different political factions fighting to gain power. Netflix’s decision to combine two seasons into one disrupts proceedings, too: The halfway point feels like a season finale in stakes and scope.

But actors Volker Bruth (Rath) and Liv Lisa Fries (Rath’s sidekick, Charlotte Ritter) carry the plot, peppered with moments of surreal suspense, seamlessly, even in the few scenes that seem a little too outrageous (like a ridiculous shootout atop a moving train.) It’s easy to see why the show is so popular in Germany, where it drew more than one million viewers its first week and became the most successful series start in the territory behind Game Of Thrones.

Aside from the sheer entertainment of the series, Babylon Berlin offers its new American audience the warning it needs in 2018. As the plot progresses, Rath must choose between his morals and nationalism—something Americans struggle with often in the 21st century. But Babylon Berlin shows us how a progressive nation can crumble when it allows bigotry and intolerance to fester.