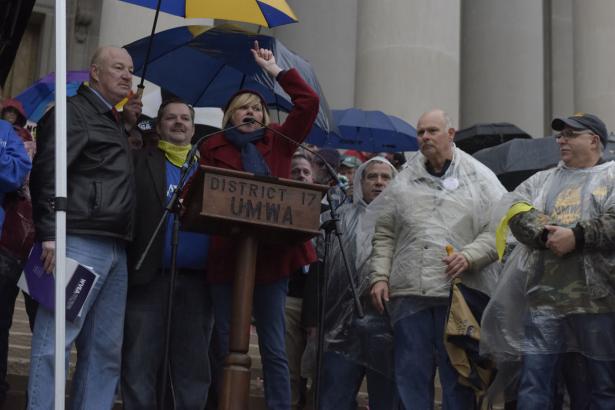 The announcement came at the end of a rally featuring thousands of teachers and others at the state Capitol, and follows weeks of growing tension between public employees, educators and the state Legislature regarding concerns with pay and health care.

The work action is a last message to legislators at the Capitol "to do your jobs or we'll vote you out," said Christine Campbell, president of the West Virginia American Federation of Teachers.

Mary Cathryn Ricker, executive vice president of the national AFT, and Becky Pringle, vice president of the National Education Association, came to West Virginia for the rally. They expressed to all the teachers there that they were setting examples for their colleagues across the country.

"Teacher shortages, all these problems, are a national crisis. West Virginia educators are showing the ways to address that," Ricker said. "The courage shown here in West Virginia is inspiring others, these teachers leading the way."

While the upcoming work stoppage will only affect teachers and school personnel, leaders said it was important to show solidarity and impress on legislators that there was a strong support system standing behind those in education.

"I don't think the Legislature realizes how many people are upset about this [PEIA]," said Becky Hiteshew, a 4th grade teacher at Peterson-Central Middle School in Lewis County. "I understand the increase in health care costs, but we [teachers and employees] have to deal with what we've been facing, and that's what we're here doing today."

Hiteshew worked as a registered nurse for 20 years before going back to school and earning her bachelors degree in teaching. Doing so meant a pay cut, but she didn't mind at the time because she loved the work and the benefits balanced out. Eight years later, though, it's not balancing out anymore, she said.

"I do nursing on the side when I have to, but it's hard. I don't think it should be that way. I love my job, and I want that to be clear, but it's hard sometimes," Hiteshew said. "[If a strike occurred] I would join. I would not cross the picket line. There is a long history of going on strike with my family and I grew up with respectful resistance -- emphasis on the respect -- but sometimes enough is enough."

Hiteshew is single and the sole income earner supporting herself and her daughter. Increases in premiums and deductibles through PEIA hit her family hard, she said.

"I'm worried, truly. And I'm afraid a strike is going to be inevitable at some point," Hiteshew said.

Gov. Jim Justice has proposed freezing PEIA, which would mean previously approved changes to the program that would raise costs for all state employees would not take effect until next fiscal year. In the meantime, Justice said he hoped to work with legislators to find a long term fix for the program.

Such a moratorium on PEIA would leave a $23 million hole in PEIA's budget, according to Justice. A bill passed in the House on Friday (HB 4620) would, if implemented, relocate $29 million from the state's Rainy Day Fund to cover the deficit.

Teachers, though, are not satisfied with short-term options. They want PEIA fixed, not just frozen, as many of the protest signs read on Saturday, and on Friday, when teachers from five counties -- Lincoln, Clay, Mason, Cabell and Wayne -- participated in work stoppages and flooded the Capitol in Charleston.

In order to secure long-term funding, PEIA Director Ted Cheatham said at a hearing Monday that because of medical inflation, about $50 million to $70 million would be needed annually to keep the program functioning as it currently does.

As for pay increases, a teacher pay raise bill (SB 267) proposing a 2 percent raise followed by three consecutive 1 percent raises was lodged in the Senate Rules Committee on Friday. That bill originally contained five years of 1 percent pay raises, which would total $404 annually for teachers. Legislators previously shot down attempts to up the raise to 3 percent in the first year, then two 1 percent pay raises.

Talks of a statewide strike have been circulating for weeks.

On Feb. 2, teachers and employees in Mingo, Logan and Wyoming counties authorized a day-long walkout, as they headed to the Capitol instead of school to appeal to legislators. They were followed by other counties, who authorized similar actions and participated in different types of protests -- like walk-ins and rallies.

On Feb. 11, union leaders from all 55 counties met with state wide union leaders in Flatwoods and reviewed votes from school employees in each county on authorizing the statewide work stoppage. A majority of the votes were in support of authorizing state-wide action, county leaders said.

In 1990, after failed wage negotiations with the Legislature, teachers at more than half of the state's public schools participated in an 11-day work stoppage. The Legislature at the time went into a special session to settle the dispute.

This time, though, more than just teachers are involved as many grievances lay with public employees who would also be affected by anything involving PEIA.

"Today was a little scary, but we have to make a statement, and I'm going to stand with my teachers," said Rachel Weber, a special education teacher at Taylor County Middle School. "I would like, though, to see action from the Legislators. I don't know if I ever will, but I hope so."

Caity Coyne is corps member with Report for America, an initiative of The GroundTruth Project. She may be reached at caity.coyne@wvgazettemail.com, 304-348-7939 or follow @CaityCoyne on Twitter.