labor West Virginia Teachers Are Now Out on a Wildcat Strike. 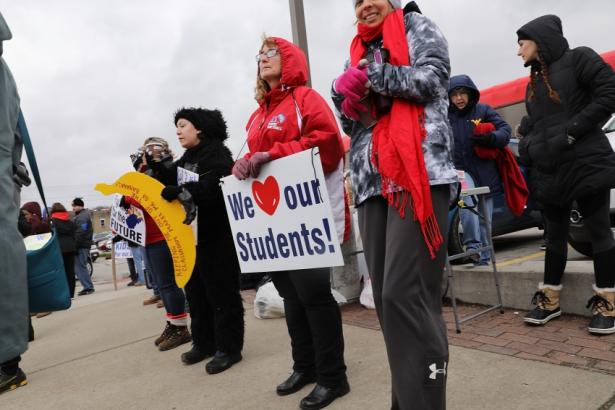 West Virginia teachers are now on the seventh day of a statewide strike. , Spencer Platt/Getty Images

In a bright spot among an otherwise bleak landscape for labor, over 15,000 teachers and school support employees in all 55 West Virginia counties have been out on strike for seven days, as they and supporters from around the state continue to flood the capitol in Charleston, W.V., demanding higher pay and affordable healthcare.

Bucking a deal struck between the West Virginia Education Association (WVEA) and the state government, school workers have defied both union leadership and state law, which affords them no right to strike and does not recognize their right to collectively bargain. These restrictions haven’t stopped West Virginia educators from leading what may be one of the most important labor actions in years.

With “right-to-work” laws spreading across the country, and a Janus Supreme Court decision that could decimate public-sector unions on the horizon, striking teachers are offering a blueprint for how to win when the odds are stacked against labor: Strike, win and then keep striking to win more—no matter what union leaders say.

The walkout in West Virginia has now become what’s known as a wildcat strike: A mass work action carried out by the rank-and-file and without the express consent of union leadership. On Tuesday, after agreeing to a five percent raise for teachers and three percent raise for other public-sector workers, WVEA leaders declared victory. But the rank-and-file weren’t having it, breaking out into chants of “We are the union bosses!” and “Back to the table!”

As union members pointed out following the announced “deal,” the pay raise would not protect teachers from the rising costs of the state employee health plan, administered by the Public Employee Insurance Agency (PEIA). Plans have become increasingly expensive over the last several years, all while teacher pay has remained low, currently ranked 48th in the country.

Media outlets announced that classes statewide would be back in session by Thursday, but dissatisfied union teachers decided to stay out on strike. As of Friday, schools in all 55 counties in West Virginia remain closed, and the strike carries on.

In some ways, it makes sense that Appalachian workers may be showing the way forward to fight the boss in the era of Trump and Janus. While this is the first statewide action for teachers and school support workers, West Virginia has a long history of rank and file militancy—under conditions far tougher than those facing workers today.

In the early 20th century, miners in Appalachia faced some of the most dangerous workplace hazards in any industry. While many miners around the country were unionized, largely by the United Mine Workers of America (UMWA), West Virginia miners attempted to organize a union for years, only to be met with violence and blacklisting. By 1919, conditions at mines around the country had reached a breaking point, and the UMWA declared a national strike. The fact that West Virginia coal mines were nonunion limited the action’s impact nationwide, leading the UMWA to commit to making serious inroads into the state.

Over the course of two years, the conflict between miners and mine operators in West Virginia escalated into what can only be described as a war. Some of the workers involved were fresh off of fighting in World War I, and applied their military training to form armed militias in order to ward off hired company security and industry-friendly local law enforcement. This period saw the Battle of Blair Mountain, a bloody conflict between coal miners, law enforcement and strikebreakers that became the largest labor uprising in U.S. history. The battle only subsided when federal troops were sent in, forcing both sides to lay down their arms.

State Senator Richard Ojeda III—a vocal supporter of the teachers’ strike now running for a House seat in West Virginia’s 3rd District, which includes the state’s southern coalfields—wrote a long thread on Twitter connecting recent events back to West Virginia’s history as a site of labor struggle. Ojeda writes that the strike (known as #55strong, referring to the number of counties in the state) has become “a fight for the soul and spirit of West Virginia that started hundreds of years ago,” when “investors came to West Virginia and purchased most of the land for all but nothing.”

He notes the slave-like treatment that faced African Americans and immigrants who were brought in to work the mines, as well as the elaborate systems of debt peonage engineered by mine operators to keep workers dependent on their bosses. “So our miners decided they wanted to unionize,” Ojeda writes, “And they fought and died for that right in one of the largest labor uprisings in the United States.”

The same areas that were at the center of the mining wars—Mingo, Logan and Wyoming counties—are also some of the poorest in the state, and, as Cathy Kunkel writes at Jacobin, in early February they were among the first to stage one-day teacher walk-outs.

Throughout U.S. history, militant unionism and mass strikes have opened up the space for unions to make demands that reach far beyond the scope of the workplace. In the lead-up to the Battle of Blair Mountain, for instance, UMWA members talked excitedly about the prospect of shortening the workweek and nationalizing the mines. And it was the strength of organized labor—indeed, the threat of open revolt—that managed to put labor protections on the national agenda and get redistributive, worker-friendly programs enacted during the New Deal era and beyond.

While a slew of left-leaning candidates are running for office this year, it’s unlikely that progressive politicians alone will cleave open the space for transformative changes in the economy, or follow through on promises made on the campaign trail, without consistent outside pressure.

Teachers and nurses are two of the country’s most heavily unionized professions. They also stand to be hardest hit when right-wing politicians attack the public sphere. But even if the Supreme Court rules against labor in Janus, which could kneecap public-sector union budgets, strikes like the one being carried out by rank-and-file teachers in West Virginia can set a tone of militancy against austerity.

Such actions also have the potential to spur workers to lay out their own vision for a society that truly values working people, to which they can then hold politicians accountable. And they can help push union leadership to keep fighting, marshaling resources toward genuinely progressive ends rather than grasping onto whatever demands they can eek out of hostile state governments.

It’s not uncommon to hear union organizers say the most successful campaigns happen in the places where the fight is the hardest: where the bosses are jerks and the pay sucks. Under Trump and, likely soon, Janus, that may well soon describe the whole country. West Virginia workers past and present have offered one hell of a roadmap to navigate such a future.

Kate Aronoff is a writing fellow at In These Times covering the politics of climate change, the White House transition and the resistance to Trump’s agenda. Follow her on Twitter @katearonoff