We must get the language right. In reality, this was a strike and movement organized outside the union apparatus. This strike took shape as it did because the existing unions had neither the credibility nor legal authority to represent the workers.  West Virginia teachers and school workers have no collective bargaining, nor the right to strike. 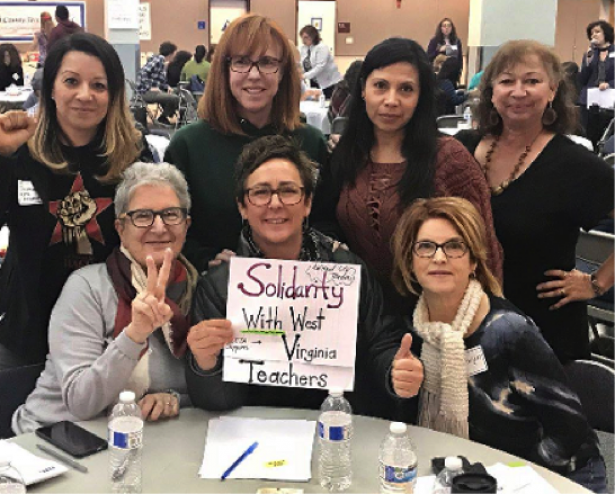 The New York Times is scurrying to learn how to report on labor when it becomes a social movement, after it botched its coverage and declared incorrectly, the West Virginia strike was over.  The Times assumed “union” meant “union officers” and “strike” meant “union controlled.” In reality, this was a strike and movement organized outside the union apparatus.  County representatives were more in touch with activists but they were not in control.

This strike took shape as it did because the existing unions had neither the credibility nor legal authority to represent the workers.  West Virginia teachers and school workers have no collective bargaining, nor the right to strike. The three unions to which teachers and school employees belong have very few members.  As in many unions, individual officers are well-intentioned. At the same time, the organizations they head are tired, out of touch, and viewed as irrelevant.  When workers have no contract or collective bargaining and do not belong to the union that says it represents them, they have not organized a “wildcat” strike because they are not violating the "no strike" provision of the contract, nor are they "defying" the union officers, whom they have never elected to speak for them, when union officers say the strike has been settled.

The union officialdom doesn’t speak for the movement. The workers speak for themselves. Let's not use the Wikipedia definition, as more than one writer has. Collective bargaining is a legal framework, and the legal definition clarifies that "wildcat" does not describe this strike.  Confusion on nomenclature reflects how remarkable this phenomenon is: we don't know how to name a movement of workers that is self-organized, not confined by the strictures of collective bargaining. There is no legally prescribed procedure for ending the strike because the vast majority of people striking aren’t union members and strikes are not legal. The strikers will have to decide when to return.

Almost all workers are affected by state and federal law to some extent, but teachers’ work is enormously influenced by state laws, from the credentials they need to get their job and keep it, to their benefits and pension.  When teachers want deep change, they come up against state power.  Because of the way schools are funded in West Virginia, teachers had to make their economic demands heard in the state legislature.  The government that denied their right to have a union that could bargain over salary and benefits  was faced by an uprising that union officials struggled to control. The legislature has moved a bit, reluctantly, on salary, a traditional union issue in contract negotiations. Will the strike continue? What’s next? At this writing no one knows. From my knowledge of what has been occurring, I don’t think the schools will reopen unless the Republicans give in to the salary demands of this popular, unlawful movement, a movement that could spark much, much more in these volatile times in a state that voted for Sanders in the primaries but went "red" in the election.

As one activist has explained to me, they are negotiating with, that is, fighting both union honchos and the state, trying to use the union apparatuswhile not allowing it to control their movement. While we don't know what will happen on salary, it seems the other lesson of this awesome movement is that an individual union or even a social movement of workers in one sector likely cannot win significant improvements on benefits (health care and pensions) that should be provided by the government. We’re too weak now to gain those in contract campaigns.  This is especially true of public employees whose boss is the state.  The demand to “Fix PEIA,” the public employee health care system, probably requires a more sustained struggle than even this powerfully solid movement can muster on its own. To revamp its broken health care system, West Virginia teachers and school workers need to join with activists to win a single-payer system.  That’s a tall order for a movement that mushroomed over a period of months, and we should not be disappointed if it doesn’t do so – yet. The real leaders of this strike teachers and school workers, not union officials.

One reason this strike has had such staying power is that teachers and other school workers are supporting one another – it’s a movement of workers organized across job categories as well as competing organizations.  They have deep support from their communities, resonating with memories of struggles in the coal mines. But another key factor is the gendered nature of teachers’ work and the people who do it.  Teachers do “women’s work” – caring for children - even if they’re male. Most teachers are women. Teachers unions often have leaders who come from high schools, men who are “political.”  Female elementary school teachers generally choose to become teachers because they love kids, and their schools are generally smaller than high schools or middle schools, so they know one another better.  Teachers as a group are very law-abiding, and elementary teachers even more so. They generally must feel very strongly to "defy" authority.  However, in my experience, when elementary teachers feel they must become “political,” they show a  breathtaking determination and solidarity in their union work.  At school they care for “their kids," and that nurturing carries into union work once their fire is lit. This is a #MeToo moment and movement although the strikers might not identify it that way.

Neither AFT or NEA, the two national teachers unions, both with state organizations in West Virginia, have given this movement the support it deserves. They can and should give a hefty donation to the strike fund to compensate for their lack of support so far. You can too. This movement has taught all of labor and the Left enough for us to subsidize the instruction.

West Virginia’s teachers and school workers have shown unions what a mass workers’ movement looks like.  They have inspired teachers all over the country, who are feeling frustration, even rage, at the loss of professional autonomy, overwork, and the lack of respect. That’s the tinder for strikes. It's a movement in search of leadership. Oklahoma teachers are now organizing a state-wide walkout.  The walkout is being discussed on a closed Facebook page and one suggestion gaining support is to hold it for the week when the state’s standardized tests are given.

It's still too early to know whether organized labor is learning what it should from West Virginia, but teachers certainly are.