film The Gay Romcom Love, Simon Is A Revolution Wrapped In Candyfloss

Love, Simon is remarkable in that it is the first film from a major studio, in this case 20th Century Fox, about a same-sex romance. 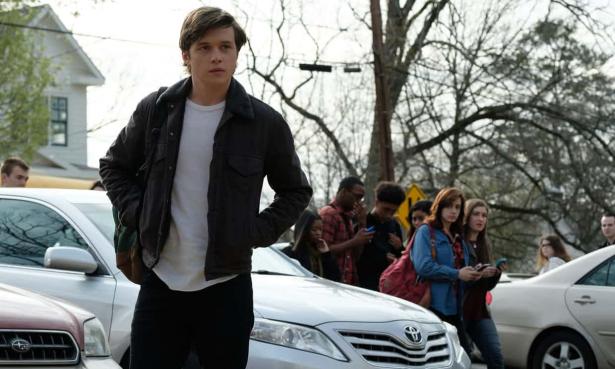 As many LGBT viewers bask in the peachy afterglow of Call Me By Your Name, 2018’s first big “gay film” comes bouncing up in the shape of something very different: a teenage romcom called Love, Simon. Based on the hit young adult novel Simon vs the Homosapiens Agenda by Becky Albertalli and directed by Greg Berlanti (husband of professional US football player Robbie Rogers), Love, Simon, is the story of a 17-year-old high school student who strikes up a secret internet relationship with another closeted teen. The film follows Simon’s quest to find out who his potential Romeo is and how it affects those closest to him.

Love, Simon is remarkable in that it is the first film from a major studio, in this case 20th Century Fox, about a same-sex romance. Early reviews have been positive, noting this, but have included occasional sniffiness that the film isn’t radical or daring enough, and perhaps isn’t even needed.

Those of my fortysomething generation will remember sitting up late, chair pressed against the door, volume low so as not to be caught, watching the gay-themed films of the time. For me it was Daniel Day-Lewis dribbling champagne into the mouth of Gordon Warnecke in My Beautiful Launderette and, as I remember, naked men basking on rocks in Derek Jarman’s Sebastiane.

It is a simple, sweet candyfloss movie like you’ve sat through a million times before – but in this case about two boys

Jarman was a brave, pioneering hero, and My Beautiful Launderette a brilliant, groundbreaking film. But as a teenager, I didn’t need art-house dreamscapes or an investigation of the gritty politics I would eventually come to feel massively passionate about: at 12, what I really needed was reassurance that one day I could get a date and that we could hold hands in the cinema and go for a slice of pizza afterwards with our friends. I cannot tell you how much I needed that.

One review suggested that this is more a warm hug for the older generation than a helping hand for today’s queer kids who are rocking their own worlds and setting their own agendas. It’s something I heard over and over when I was writing my book Straight Jacket, about LGBT mental health: that the new generation “were over it” and didn’t need any help.

But that’s not what the young people I spoke to told me. Yes, of course it is far easier now in many ways. But some told me of being spat on in the street, or of being so bludgeoned by anxiety they didn’t go out, or of being bullied by families – one told me his stepfather wouldn’t allow him to have dinner with his siblings in case his sexuality “was catching” – and of course, when it comes to those from religious backgrounds, the problem is still huge and one which we are scared to speak about. Even today it is estimated that a quarter of homeless young people identify as LGBT. There is still a struggle to find solid healthy ground on to which young LGBT kids can pitch their identities. There is still a lack of positive representation.

Love, Simon will no doubt press some buttons for those looking to be outraged: it’s written (like Call Me By Your Name) by a straight author, and Simon is palatably attractive, masculine and middle class (horror!). But let’s get over it. This is a film for teenagers that follows the template for all mainstream American films for teenagers. It is simple, sentimental, sweet – a candyfloss movie like you’ve sat through a million times before. But in this case about two boys – and it is an utter delight from start to finish.

What’s more – and what makes it feel even more groundbreaking – it is a gay film that is feelgood, and no one dies at the end (sorry for the spoiler). Yes, let me repeat that. THIS! IS! A! GAY! FEELGOOD! FILM! It is a gift to LGBT teens. And if you’re in doubt, just look on Twitter at the dewy-eyed rapture with which they are gushing about the movie. No matter what anyone says, this will make a significant number of young people across the world feel a bit better than they did before they saw it. And for us older people it will be a moving (and possibly painful) experience too.

What’s most important now is that it is a commercial success. If you care about gay rights or representation, get out there and pack those cinemas, especially on opening weekend.

It opens this week in the US and next month in the UK. If Love, Simon makes decent money, more movies like it will follow. We’ll be more likely to see grownup films about the complexities of LGBT lives. There will be a greater chance of a queer superhero. The lives of queer people of colour and trans people will be better depicted. We may even – yes, dare to dream – get more LGBT films with happy endings. If that happens then Love, Simon might prove to be the most radically queer film of all time.

• Matthew Todd is a former editor of Attitude magazine and the author of Straight Jacket: How to be Gay and Happy

I appreciate there not being a paywall: it is more democratic for the media to be available for all and not a commodity to be purchased by a few. I’m happy to make a contribution so others with less means still have access to information.Thomasine F-R.