Thousands join March for Our Lives 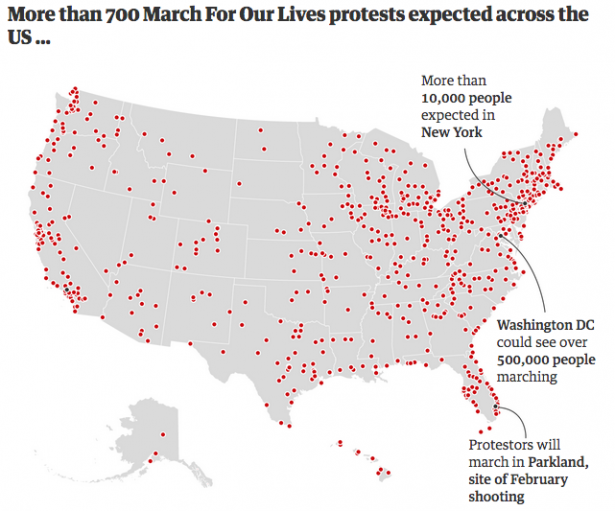 Hundreds of thousands of students joined the pro-gun control March for Our Lives rallies across the US in one of the largest expressions of popular opposition in the modern era.

Events have been taking place at more than 800 locations around the world – including London, Sydney, Tokyo, Mumbai, plus hundreds of places in the US.

In Washington, as the number of young, diverse and impassioned protesters swelled along Pennsylvania Avenue, many carried signs reading “We are the change”, “No more silence” and “Keep NRA money out of politics”.

Organizers said they hoped their protest would be one of the biggest in the capital since the Vietnam era, and it was clear they had been careful to create a diverse, inclusive group of speakers.

Along with survivors from the attack in Parkland, Florida, who have galvanized the new push for gun reform, speakers included young victims of gun violence from around America. They sang, they chanted, and they challenged their parents generation to be effective in eliminating gun violence from society. 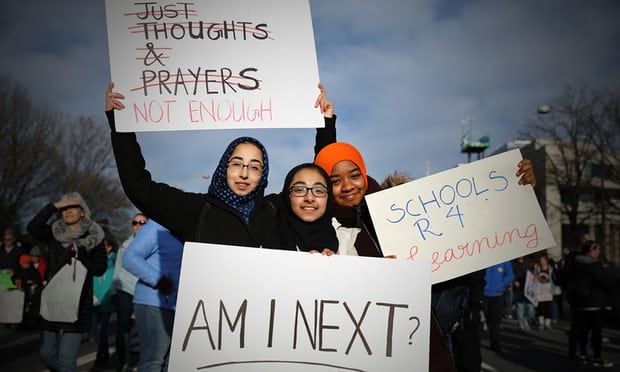 Edna Chavez, 17, from Manual Arts high school in Los Angeles, took the stage with a raised fist and spoke powerfully about her brother, who was killed by gun violence. “I have learned to duck from bullets before I learned to read.” She led the crowd to chant his name, “Ricardo! Ricardo!”

Yolanda Renee King, granddaughter of Martin Luther King, told the crowd: “I have a dream that enough is enough. And that this should be a gun-free world, period.”

She then asked the crowd to repeat back her words: “Spread the word, have you heard? All across the nation. We are going to be a great generation.”

She led the chant three times, encouraging the crowd to repeat her words “so the whole world can hear.”

Shortly before the end of the event, Parkland shooting survivor Emma Gonzalez – who had been a leading voice immediately after the attack on her school – took to the stage for six minutes and 20 seconds, much of that in silence. She said it was the amount of time it took a school shooter to kill 17 people at her school in Florida last month.

As the students gathered, Donald Trump was whisked by motorcade to his West Palm Beach golf club. Trump later tweeted support for “the victims of the horrible attack in France yesterday” but did not mention the rallies on Twitter. A White House statement read: “We applaud the many courageous young Americans exercising their first amendment rights today. Keeping our children safe is a top priority of the president’s, which is why he urged Congress to pass the Fix NICS and STOP School Violence Acts, and signed them into law.”

The administration also drew attention to some minor reforms the president has called for, including a move by the justice department on Friday to ban bump stocks, the accessory that allows rifles to mimic the rapid fire of automatic weapons.

The NRA stayed silent on the student gatherings. But outside the FBI headquarters in Washington, about 30 gun-rights supporters staged a counter-demonstration in front of the FBI headquarters, standing quietly with signs such as ‘Armed victims live longer” and ‘Stop violating civil rights’.

Veteran civil rights leader John Lewis said the protests reminded him of the early days of the civil rights era. “I think it’s amazing,” Lewis said. “They will be the leaders of the 21st century.”

In one of the first speeches, Marjory Stoneman Douglas senior Delaney Tarr told the crowd of the students’ demands, including background checks and a ban on assault weapons. “When you give us an inch, that bump stocks ban, we will take a mile,” she said. “We are not here for breadcrumbs, we are here to lead.”

Earlier, the Guardian spoke to Cassie Pearce, 17, who had ridden in her school bus for 10 hours from Manchester, Vermont with dozens of her classmates. Clutching a sign that read “I should be writing my college essay, not my will” Pearce said: “I’m here because enough is enough. We have a right to be heard. We don’t want to be killed in school.”

In a meeting with lawmakers in the aftermath of Parkland, the president had signalled support for stronger background checks on gun purchases and raising the minimum age for buying high-powered rifles. But the NRA staunchly opposed these measures and Trump appears to have abandoned the proposals.

A group of student journalists from the Stoneman Douglas newspaper, the Eagle Eye, were invited to guest-edit the Guardian’s US website this weekend. Eleven students covered the rally in Washington, interviewing other survivors of gun violence from Stoneman Douglas and elsewhere.

Parkland student Jordan Khayyami, 15, said: “I think that legislatures should be aware that the next generation of voters is right in front of them so if they don’t want to promote change then we will vote for change.”

The scenes of thousands of students on the streets was overwhelming to many of the victims of gun violence who attended the Washington rally. “I did not expect this. I’m still astounded,” said Mark Barden, whose seven-year-old son Daniel was one of the 20 children murdered at Sandy Hook in 2012. “To me, it looks like our entire nation is finally on board.” 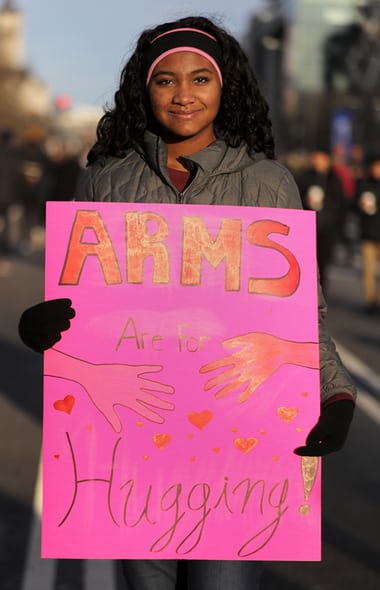 While the day was focused on the youth, Sir Paul McCartney stood in solidarity with marchers in New York’s Central Park and referred to John Lennon’s fatal shooting outside his apartment building in 1980. “One of my best friends was killed by gun violence right around here, so it’s important to me not just to march today but to take action tomorrow and to have these people to have their voices heard,” he told CNN.

There were, however, a number of counter protests in some cities. AP reported that in Salt Lake City, Utah about 500 pro-gun marchers walked to the state Capitol building, though they were far outnumbered by an estimated 15,000 gun control marchers there.

While classmates are rallying in Washington, thousands more Stoneman Douglas survivors, their families and supporters are among tens of thousands gathering in Parkland, Florida, the scene of last month’s shooting.

More than 20,000 attended to listen to the speeches from the amphitheater at Pine Trails Park before walking the mile south to Stoneman Douglas high school.

“Parkland is a family. And when our family is hurting, we all come together,” said Liam Kiernan, a 15-year-old Parkland 10th grader. “We become stronger because we feel we’re all one person.”

Max Schachter, the father of Alex, a 14-year Stoneman Douglas marching band musician, broke down in tears as he recalled how his son enjoyed playing basketball with his older brother and teaching his little sister “to become a better trombone player”. Schachter said that on 13 February he was like any other parent, wanting his children to be happy and get good grades. Then the Valentine’s Day shooting happened.

“Since the day that changed my life, I will not stop fighting for change,” he said.

Additional reporting by staff of the Eagle Eye, Edward Helmore and Richard Luscombe in Parkland, Florida

If everyone who reads our reporting, who likes it, helps fund it, our future would be much more secure. For as little as $1, you can support the Guardian – and it only takes a minute. Thank you.Support The Guardian