The secrets Ellsberg (Pentagon Papers) unfolds are a thousand times more frightful than Stephen King at his best. Except this is no novel. Not “Dr. Strangelove” but “A Hard Rain’s a Gonna Fall.” 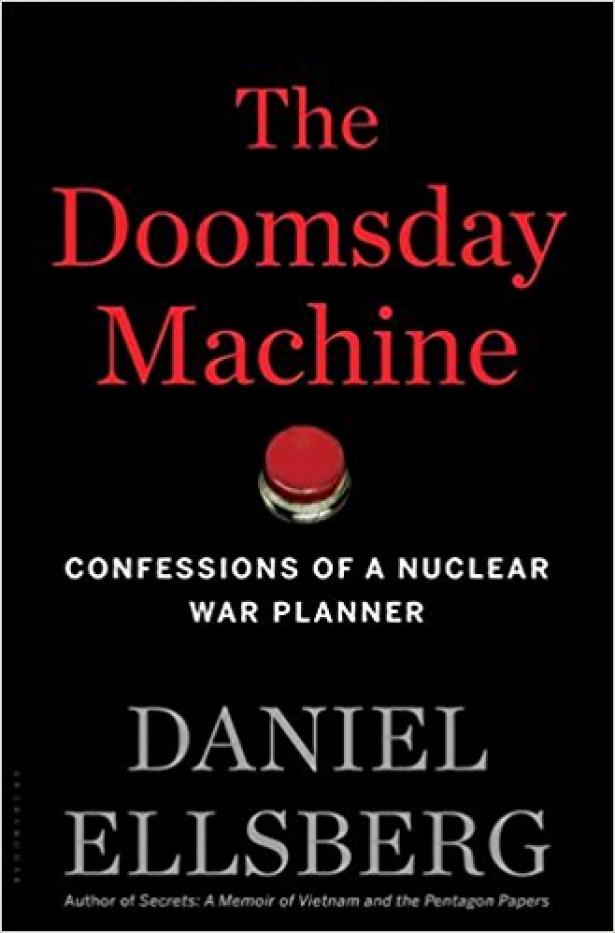 When President Trump mocked North Korean leader Kim Jong Un saying “I too have a Nuclear Button, but it is a much bigger & more powerful one than his, and my Button works,” it produced days of fodder for late night TV comics.

But maybe it was not so funny if you espied the cover of “the Doomsday Machine,” which stares at you with a near glowing big red button, opening up to reveal a chilling expose by the godfather of whistleblowers, Daniel Ellsberg, that, if anything, make Trump’s casual boasts even more apocalyptic.

The latest secrets Ellsberg unfolds are a thousand times more frightful than Stephen King at his best, and spun in surprisingly taut writing that at times reads like a John LeCarre thriller. Except this is no novel, it’s not “Dr. Strangelove,” which Ellsberg calls a “documentary,” it’s a real life nightmare of “A Hard Rain’s a Gonna Fall.”

Sensitive sorts might have trouble getting past the first two pages. Ellsberg opens by shedding light on a highly classified “For the President’s Eyes Only” document, he read as a special assistant to the Secretary of Defense in the Spring of 1961. Nuclear planners had a first strike general war plan to drop thousands of nuclear bombs on every major city in the Soviet Union and China that would kill from 275 million to 350 million people. Not counting the collateral deaths of some hundred of million more.

Such a scenario never went away. Just now it’s in the hands of one Donald J. Trump. Scary enough, but it’s not just him. Ellsberg also lets us in on some other inconvenient truths. Many more military commanders around the world also have authority to ignite the Doomsday Machine, if they think their higher ups are out of commission or can’t be reached rapidly enough, and it goes well beyond the insane.

The Dr. Strangelove calamity set off by a rogue Brig. Gen. Jack D. Ripper and command pilot Maj. “King Kong” setting off the Doomsday Machine with one solitary bomb is, after all, not exactly far fetched. The idea, if one side knocks out the “command” decision structure, a local military officer, and even an automated system, can kick in a retaliatory or first strike full-scale launch.

It still exists. Ellsberg cites an article in Pravda, two weeks after Trump’s inauguration, quoting a top Russian official confirming the Russian doomsday weapon, sometimes aptly branded the “dead hand” remains in place. Ours does too.

“Arrangements made in Russia and the United States have long made it highly likely, if not virtually certain, that a single Hiroshima-type fission weapon exploding on either Washington or Moscow – whether deliberate or the result of a mistaken attack… would lead to the end of human civilization,” writes Ellsberg.

Or it can be set off by accident, a radar misreading, or launch on warning protocol built into the system. Adds a bit of chill to that inadvertent “this is not a test” missile alert in Hawaii in January.

Now consider the implications of the Vulcans in the White House itching to launch a “preventive war” against North Korea, and to tear up the arms deal with Iran. Or their boss, the Commander in Chief, who has spoken openly of encouraging South Korea and Japan to become nuclear states.

And those other foreign policy wonks plotting to escalate tensions with Russia, and China, while encouraging nuclear-armed India to be more aggressive with nuclear -armed Pakistan.  Not to mention all the winks and nods to nuclear-armed Israel. A nuclear conflagration can literally begin almost anywhere with the armaments on hair trigger alert.

What could go wrong with more global nuclear proliferation anyway? On the plus side, nuclear winter might lessen the threat of global warming.

In brandishing the nuclear “football,” Trump is, in this regard, continuing a tradition, to varying degrees, of every President since FDR began the clock on the Manhattan Project.

Truman, of course, is still the only head of state to have dropped a bomb slaughtering tens of thousands of civilians, but many since have routinely used the “threat” of nuclear strike to terrorize other nations, from Eisenhower to Nixon’s fantasizing about reigning nuclear weapons on North Vietnam, to a Carter doctrine following Soviet intervention in Afghanistan, and down the line. And no President has yet refused to pledge a no first use of nuclear weapons.

The world came close to devastation during the Cuban missile crisis, of course, though most are unaware of how many incidents and accidents during that conflict, that Ellsberg discloses, came perilously close to setting off the nuclear storm, prevented only by Krushchev and JFK pulling back from the brink.

What made the horror of Hiroshima and Nagasaki more palatable to war planners, Ellsberg writes, was decisions first by Britain and then the U.S. to employ intensive non-nuclear bombing early in World War II as a specific tactic to deliberately kill civilians.

This gruesome strategy reaching its heights, or nadir, with the March, 1945 U.S. firebombing of Tokyo in which between 80,000 to 120,000 people were annihilated. By Hiroshima, Ellsberg notes, “the U.S. Army Air Force had (for months) been deliberately killing as many Japanese civilians as it could.”

Even so, the scientists working on the bomb were not sure how much devastation they were unleashing. There was considerable speculation that the heat required to overcome resistance to the fusion of two or more atoms of hydrogen might actually ignite “instantaneously all the hydrogen in the oceans and set the air around the globe on fire.”

As the first atomic test in Alamogordo, NM in July, 1945 neared, some of the scientists wondered if the headline might be, “We’ve lost New Mexico.” Enrico Fermi, who earlier constructed the first nuclear reactor, went further, positing taking bets the explosion might “ignite the whole world.”

Can we step back from the danger of extinction of all life on earth? Without complete dismantling of everyone’s nuclear arsenal? Ellsberg thinks it is possible, if done in stages, starting with land-based intercontinental missiles, silos and the launch on warning protocols, followed by “radically lowered” numbers of weapons. Unfortunately Trump and his hawkish war planners are going in the opposite direction with plans to “modernize,” and “rebuild” the U.S. killing arsenal.

Ellsberg, who was sidetracked in getting the word out sooner by his dissemination of the Pentagon Papers to help stop another atrocity, the Vietnam War, challenges all of us to heighten public awareness of the “madness,” while recalling that the with mass pressure, the unimaginable can become imaginable, such as the shift to majority rule in South Africa. “Forces for sustaining an unjust and dangerous status quo are not all powerful,” he reminds us.

It was Nelson Mandela who, after all, once said, “It always seems impossible until it is done.” Simply put, we have no other choice.