The Fading Spirit of the Labor Struggle — King's Purpose in Memphis

Strikes can improve wages and working conditions, but history shows that more formal channels of negotiation are required to resolve the contradictions between society's reliance on public employees and its failure to value their labor. 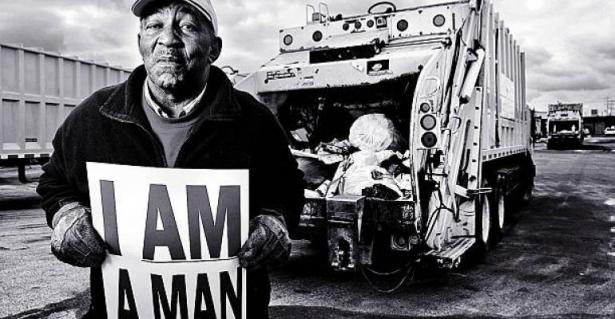 Sanitation worker Ben Jones, now 71, holds a replica placard of the words made famous by strikers in Memphis who demanded better wages and respect.,from Miami Herald

As we mark the 50th anniversary of the assassination of the Rev. Martin Luther King Jr. in Memphis on April 4, 1968, the issue that drew him to that city still resonates. “So often we overlook the work and the significance of those who are not in professional jobs, of those who are not in the so-called big jobs,” the civil-rights leader told 1,300 African-American sanitation workers who were on strike against the city for decent wages and working conditions and for recognition of their union. Pointing out that garbage collectors were as critical to public health as doctors, he declared: “But let me say to you tonight that whenever you are engaged in work that serves humanity and is for the building of humanity, it has dignity, and it has worth.”

Strikes this year by teachers in West Virginia, Oklahoma and Kentucky, and the threat of one in Arizona, indicate that public employees have lost neither the ability nor the imperative to demand wages and working conditions that reflect the dignity and worth of their labor. If college degrees make teachers professionals, that status is undermined by low wages and underfunded retirement and health care plans. It is widely noted that strikes are erupting in states with some of the lowest-paid teachers in the nation, but throughout the U.S. teachers earn far less than other workers with similar levels of education. But it’s not just the wages that are part of the conflict: “It’s not the raise as much as it is having the respect that we deserve from the government,” one teacher in West Virginia stated after legislators reluctantly approved a pay increase.

Strikes can improve wages and working conditions, but history shows that more formal channels of negotiation are required to resolve the contradictions between society’s reliance on public employees and its failure to value their labor. The Memphis strike ended only after King’s murder, when clergy, civil-rights and labor leaders and President Lyndon Johnson placed tremendous pressure on city officials to negotiate with the sanitation workers. Mayor Henry Loeb insisted that state law prohibited him from signing a formal contract with the union, but he conceded to significant wage increases and allowed workers to be represented by the union in negotiations and grievances with the city. Of equal importance to the men who had been shut out of higher-paid truck driving and supervisory positions because of their race, the “memorandum of agreement” also stipulated that promotions would be made solely “on the basis of seniority and competency” and prohibited discrimination based on “age, sex, marital status, race, religion, national origin, or political affiliation.”

Negotiations with the Memphis sanitation workers followed a national trend in the 1960s and ’70s, when cities and states developed legal frameworks for resolving disputes with their employees. Those new collective-bargaining policies were more restrictive than federal laws that had governed labor relations in private industry since the 1930s, particularly in the harsh fines and jail sentences they prescribed for public-sector union leaders who supported strikes and the narrow limits they placed on issues that workers could bring to the bargaining table. Collective bargaining did not stop public employees from going on strike, but it allowed governments to resolve conflicts more quickly and, after a wave of militancy in the early 1970s, made strikes less frequent. Critical to that labor peace was a formal mechanism for resolving disputes, particularly for workers who were excluded from better-paid jobs because of their race or gender. “What Memphis and the spirit of Memphis did was give a new kind of recognition to some workers that had been there all along but [were] never recognized,” recalled William Lucy, who helped organize the sanitation strike and became one of the nation’s most influential African-American labor leaders.

A half-century later, the “spirit of Memphis” is fading. Since 2010, a number of states have severely restricted the collective-bargaining rights of public employees; most notably Wisconsin, the state that first adopted a public-sector collective-bargaining law in 1959. Oklahoma and Kentucky recently restricted their collective-bargaining policies, and West Virginia has no statewide system. Restrictions on public-sector unionism rest on the claim that collective bargaining transformed public employees into “a new privileged class,” but even critics admit that unions have merely brought public workers’ wages and benefits in line with comparable workers in the private sector. Those gains are further threatened by the case Janus vs. AFSCME, now before the Supreme Court, which is widely expected to undermine collective-bargaining policies that many states and cities view as essential to the quality and reliability of public services.

As courts and elected officials dismantle the collective-bargaining policies of the 1960s and ’70s, we should recall that they were adopted to address the contradiction between the low wages and poor working conditions of public employees and the dignity and worth of the jobs they perform. It is often noted that increasing racial segregation, economic inequality and social violence have moved our society away from King’s dream of a just society. To that list we must add his final wish — that we “respect the dignity of labor.”

William P. Jones is a professor of history at the University of Minnesota and author of “The March on Washington: Jobs, Freedom and the Forgotten History of Civil Rights.” He is writing a book about public employees and the “dignity of labor.”