Actor who starred in popular 1980s film advocates critical stance towards art of past. 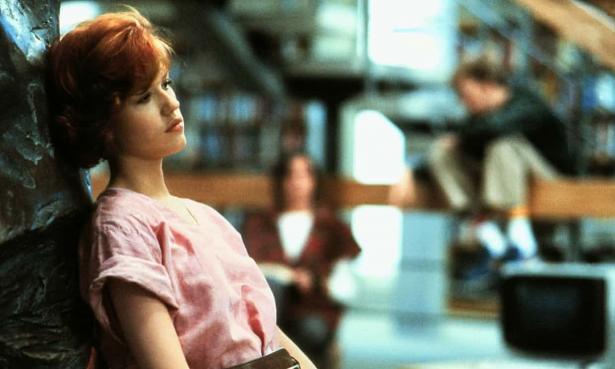 The Breakfast Club was one of the 80s films that propelled Molly Ringwald to stardom., Allstar/UNIVERSAL/Sportsphoto Ltd

Molly Ringwald, who starred in The Breakfast Club, has admitted she now finds the cult 1980s film “troubling”.

Writing in the New Yorker, the actor who was 16 when she starred in the high school drama in 1985, describes rewatching the film with her daughter and reflecting on some of the scenes in the age of #MeToo.

Directed by John Hughes, The Breakfast Club was a critical and commercial hit that told the story of five different teenagers forced to spend Saturday in high school detention together.

Ringwald, now 50, recently agreed to watch the film again with her 10-year-old daughter. Despite fearing her child would be concerned by some of the more adult themes, including discussions of sex and drug taking, she found the way her character, Claire, was treated by one of the male students – played by Judd Nelson – to be “most troubling” to her.

She said that in light of the number of women who had come forward with sexual assault accusations against Harvey Weinstein, and the #MeToo movement gathering pace, she had kept thinking about one particular scene.

“At one point in the film, the bad-boy character, John Bender, ducks under the table where my character, Claire, is sitting, to hide from a teacher,” she wrote. “While there, he takes the opportunity to peek under Claire’s skirt and, though the audience doesn’t see, it is implied that he touches her inappropriately.”

She said the shot of her character’s underwear was filmed by an adult woman standing in for her, but even so she had found it embarrassing and her mother had been upset by it and asked for it to be cut.

“What’s more, as I can see now, Bender sexually harasses Claire throughout the film. When he’s not sexualising her, he takes out his rage on her with vicious contempt, calling her ‘pathetic’, mocking her as ‘Queenie’. It’s rejection that inspires his vitriol.”

Ringwald noted that, despite all of this, the film sees him “get the girl in the end”.

While praising the work of Hughes, who was responsible for two other 80s films in which she starred, Sixteen Candles and Pretty In Pink, the actor said she had recently “felt the need” to examine the role the films played in cultural life.

“If attitudes toward female subjugation are systemic, and I believe that they are, it stands to reason that the art we consume and sanction plays some part in reinforcing those same attitudes.”

Citing other work by Hughes, who died in 2009, including his writing for National Lampoon and troubling scenes in other films they did together, she wrote: “It’s hard for me to understand how John was able to write with so much sensitivity, and also have such a glaring blind spot.”

In the essay, which has been widely praised, she also asks: “How are we meant to feel about art that we both love and oppose?”

Some have criticised Ringwald, however, arguing she should not complain about the director who made her a star.

However, the US author Jenny Han tweeted in response: “To all the people claiming that Molly Ringwald is ‘throwing John Hughes under the bus’ – did you even read what she wrote?

“It’s a pretty tender, fair-minded piece. She’s not ‘crying’ about #MeToo. She’s a grown woman examining her legacy and that of the man who helped shape it.”

The US writer Mark Harris said the article was “one of the most insightful and honest pieces of cultural criticism I’ve read in ages, and a model of how to discuss movies within the context of when they were made without excusing their faults and failings”.

I appreciate there not being a paywall: it is more democratic for the media to be available for all and not a commodity to be purchased by a few. I’m happy to make a contribution so others with less means still have access to information.Thomasine, Sweden