What is needed is a broad-based coalitional effort to combat not only street violence, school violence and sexual violence but also state violence. 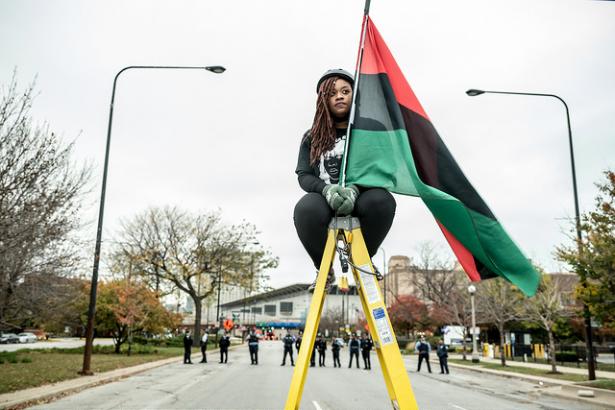 An activist holds a Pan-African flag during a protest disrupting the Association of Chiefs of Police Conference on October 25, 2015, in Chicago, Illinois.,Sarah-Ji

April 4 marks the historic 50th anniversary since Dr. Martin Luther King Jr. was assassinated. At this time, it is vital to highlight the fact that King understood the depth of state violence, noting the violent effects of government policy in many spheres.

As King said a year before his death, "I could never again raise my voice against the violence of the oppressed, without having first spoken clearly to the greatest purveyor of violence in the world today -- my own government."

It is easy to focus on "lone gunmen" or "rogue cops" as individual perpetrators of violence, and of course on one level, that is true. People pull the triggers of guns. But the problem runs deeper than that. Police have enormous power and privilege in leveraging deadly force against civilians who they see as a threat or whose lives they don't value. The state gives them permission to use this force and condones racist violence by allowing wanton shootings to occur with impunity.

King's anniversary will be marked in many ways around the country. In Chicago, where we live, the 16-month-old Resist, Reimagine, Rebuild (R3) Coalition and affiliated activist groups will hold a rally at the city's Daley Center to highlight the radical legacy of King and those who fought alongside him.

We will link King's legacy to the ways in which we can resist the rampant anti-Black state violence being perpetrated today. In Chicago and the larger Chicago area, from Zion to Elgin to the South and West Sides, we have seen numerous cases of unchecked police violence against Black people. For example, the tragic case of Decynthia Clements, who was shot by police on a freeway while inside a burning car and thought to be suicidal. There is the lingering case of Bettie Jones and Quintonio LeGrier, both shot the morning after Christmas in 2015 after LeGrier, a 19-year-old student home on vacation, called 911 for help. Chicago's police chief does not think the officer who killed the two neighbors deserves to be fired.

Meanwhile, in Louisiana there will be no charges against the two officers that pinned Alton Sterling to the ground and shot him in the chest, all of it captured on video. Sterling was selling CDs out of the back of his car. No one will be held accountable. Many people and groups are implicated in this injustice: Individuals pulled the trigger in these cases, but they are then protected by the policies and practices of city officials, police unions, lawyers and judges.

Most recently there is the case in Sacramento of Stephon Clark, which hits us very close to home here in Chicago. It sounds all too familiar. In March 2018, 20 shots killed 23-year-old Clark in his grandmother's backyard. In October 2014, 16 shots ended the young life of Laquan McDonald on a dark street in Chicago -- and for a long while, no one in power cared, until activists made them at least pretend to "care."  Both of these men were young and from poor and working-class communities. This point is significant in terms of Dr. King's legacy.

King died fighting alongside sanitation workers, men who did dirty and dangerous work for low pay. The strike that took King to Memphis in the spring of 1968 was triggered by a tragedy in which two men were crushed by a malfunctioning truck. The contemporary parallels continue: A few days before King's visit, an unarmed Black teenager, Larry Payne, was shot during the Memphis protests by police. Payne was suspected of "looting." There is no evidence that he was guilty, and his family insisted he was not. But even if he had been, extinguishing a life for a handful of goods snatched from a store is the wrong moral calculus by any standard.

Exactly a year before he died, King declared, "I am convinced that if we are to get on the right side of the world revolution, we as a nation must undergo a radical revolution of values.... We must rapidly begin the shift from a thing-oriented society to a person-oriented society." King was indicting the very logic of racial capitalism that continues to devalue some lives over others.

The demand to end police violence is related to the #MeToo call for an end to sexual violence; to students' demands for safe schools and an end to the NRA gun agenda; to immigrant rights organizations' demands for an end to violent raids and deportations; to efforts to combat Islamophobia and anti-Semitism; to the fight to end vicious assaults on queer and trans people; to the abolitionist movement against the mammoth prison industrial complex; to the insistence upon life-sustaining services for people with disabilities; to the movement to end US support for the Israeli government's violence in Gaza; and to the climate change movement's call for an end to the war against our planet. Our local struggle is part of this big picture. A person-oriented society would highlight the values of all of these movements.

The activists in Sacramento have protested the murder of Stephon Clark in the streets, at sports events and at City Hall. Yesterday, the Sacramento chapter of Black Lives Matter Global Network issued a call for support rallies around the country on the anniversary of King's assassination. The rally on Wednesday by the R3 Coalition, at 6:00 p.m. at Daley Plaza in Chicago, will express the support of over 30 organizations in our coalition and partners in other groups in the city. Those groups include BYP100, which works on the Expanded Sanctuary campaign, the National Alliance Against Racist and Political Repression (NAARPR), which works on the campaign for a Civilian Police Accountability Council, Assata's Daughters and others working on #NoCopAcademy.  What is needed is a broad-based coalitional effort to combat not only street violence, school violence and sexual violence -- all of which are absolutely concerns of our communities -- but also state violence, which takes the form of police violence in our cities, economic violence at all levels, and increasingly aggressive military posturing on the world stage.

Fifty years after King was shot and killed on the balcony of the Lorraine Motel, where are we? Police who kill Black people continue to receive impunity through non-indictments and not-guilty verdicts. Fifty years later, mass incarceration, divestment from Black communities, school closures, unemployment, segregation, and unequal and inaccessible health care and housing continue to plague our communities. From Stephon Watts, to Justus Howell, to Ronald Johnson, to Alton Sterling, to Decynthia Clements, to Tamir Rice to Aiyana Stanley-Jones, to all killed, brutalized, terrorized and tortured -- to all of our communities suffering and in pain, we must say "No More!"

Aislinn Pulley is a lead organizer with Black Lives Matter Chicago, founding the chapter as part of the Freedom Ride to Ferguson in August 2014. She is an organizer with We Charge Genocide; a founding member of Insight Arts, a cultural nonprofit that uses art for social change; as well as a member of the performance ensemble, End of the Ladder. She is a founder of the young women's performance ensemble dedicated to ending sexual assault, Visibility Now, as well as the founder and creator of urban youth magazine, Underground Philosophy.

Barbara Ransby is a historian, author and longtime activist and works with Chicago's R3 Coalition.