Why Teacher Uprisings May Hit Blue States Too

The sad truth is financial austerity that has driven governments at all levels to skimp on education has had plenty of compliance, if not downright support, from centrist Democrats. 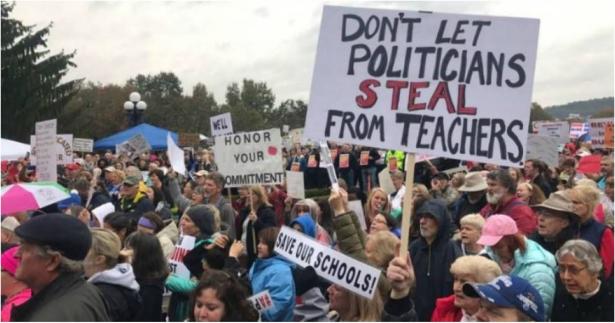 "Democrats in the state legislature spent considerably more energy staving off further cuts to education, rather than pushing for bold efforts to increase funding.", WDRB/screenshot

Surprising results from a new survey of teachers reveal the depth of “financial strain” classroom professionals face. These include high levels of college debt, stagnation of already subpar pay, increasing housing and childcare costs, rising health insurance premiums and prescription costs, and escalating out-of-pocket expenses for their own classroom supplies.

More than half of the respondents resorted to second jobs to try to close the gap between what their teaching jobs paid versus their actual cost of living.

The revelation teachers are financially struggling wasn’t what was surprising about the survey. Recent news of teacher “red-state rebellions” in West Virginia, Oklahoma, Kentucky and Arizona have brought great depths of attention to the economic plight of teachers who are walking off the job in Republican dominated states because of years of education funding cuts. No, what was surprising about this survey was the teachers weren’t in a red state at all; they were in true-blue Vermont.

The sad truth is financial austerity that has driven governments at all levels to skimp on education has had plenty of compliance, if not downright support, from centrist Democrats who’ve spent most of their political capital on pressing an agenda of “school reform” and “choice” rather than pressing for increased funding and support that schools and teachers need.

In a startling sign that teacher uprisings may move to purple and blue states too, Colorado teachers recently left schools and stormed the state capitol to protest their subpar wages – ranked 46th in the nation, reports the New York Times, and “rock bottom” when compared to other professionals in the state. “Colorado has a Democratic governor,” notes the Times, “and a Legislature split between Democrats and Republicans.”

Soon after their rally at the capitol, teachers in Denver, the state’s largest school system, announced a systemwide walkout on April 27. The next day, administrators in the state’s second largest district, Jefferson County, announced their schools would close a day earlier on the 26th in anticipation of teachers not showing up for work.

Since the Great Recession in 2009, Colorado has had one of the best performing economies in the nation, but school funding has increased only 3.4 percent above 2008 levels according to an analysis by the Center on Budget and Policy Priorities.

Much of the school funding woes can be traced to the enactment of a Taxpayer’s Bill of Rights (TABOR) constitutional amendment in 1992 that severely limits school funding. Democrats have done little to try to repeal or devise workarounds to the amendment, and centrist Democratic Governor John Hickenlooper recently declared he “can’t imagine” TABOR being repealed.

Another school funding can Colorado Democrats keep kicking down the road arises from a constitutional amendment, Amendment 23, passed in 2000 that was designed to boost and protect K-12 funding but was subsequently limited when state coffers shrank in 2009. (Funny how amendments to increase school funding can be quickly undone while those limiting funding can’t.)

In his final state of the state speech, term-limited Governor Hickenlooper called for more education funding but blamed “voters” for lack of action on that front. Then, his final budget proposed $5.5 million more for charter schools.

Saying No to Centrism

The Colorado teachers’ plans to walk out of school is a strong sign they’ve had it with state government inaction on funding. There’s also a sign many Colorado Democrats feel that way too.

At the most recent state assembly of the Colorado Democratic party, delegates sent a strong rebuke to the state chapter of Democrats for Education Reform, demanding the organization cease to use “Democrats” in its name, Chalkbeat reports.

The platform amendment, passed overwhelmingly by the delegates, opposed the group’s intentions of “making Colorado’s public schools private or run by private corporations or becoming segregated again through lobbying and campaigning efforts.”

This rebuke has significant ramifications for the Democratic party and the direction of education policy not only in Colorado but nationwide.

“Democrats for Education Reform, founded more than a decade ago, was at the center of a split within the Democratic Party over school reform that began to play out with the 2008 election of President Barack Obama,” explains Valerie Strauss at the Washington Post. The organization’s embrace of traditionally Republican education policies – including charter schools, vouchers, standardized testing, and enforced closure of neighborhood schools – instead of funding schools and supporting teachers, had the effect of wiping away “the traditional partisan divide over education policy,” she argues.

Now there are growing signs Democrats want to bring those traditional partisan distinctions back.

A recent analysis by Brookings spotlights North Carolina and Mississippi as the most likely states for the next teacher uprising. Other candidates include Alabama, Georgia, Idaho, New Mexico, South Carolina, South Dakota, and Utah.

It’s interesting that analysis, likely completed a few days before trouble started brewing in Colorado, doesn’t have that state on the list.

Jeff Bryant is an associate fellow at Campaign for America's Future and editor of the recently launched Education Opportunity Network, a project of the Institute for America’s Future, in partnership with the Opportunity to Learn Campaign.