For 15 Years, Energy Transfer Partners Pipelines Leaked an Average of Once Every 11 Days 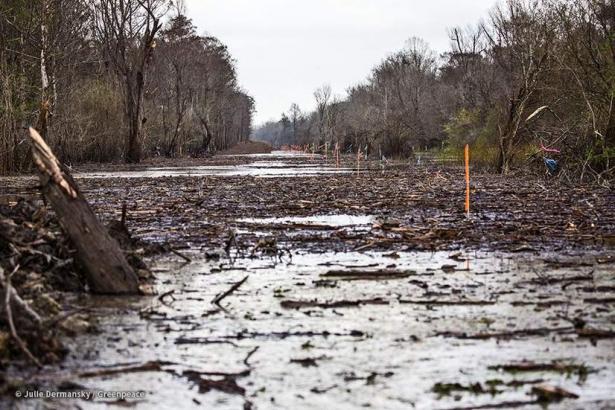 Stakes mark the path of part of the Bayou Bridge pipeline through wetlands in Louisiana., 2018 Julie Dermansky for Greenpeace USA.

That doesn't include an additional 2.4 million gallons of “drilling fluids, sediment, and industrial waste” leaked during ETP's construction of two pipelines in West Virginia, Pennsylvania, Ohio, and Michigan. Also left out: air pollution and leaks from natural gas pipelines, which were beyond the scope of the new report but which play a significant role in climate change and can cause explosions.

Across the entire industry, hazardous liquid pipelines spilled a total of 34.7 million gallons during the past decade, directly causing 16 deaths and $2.7 billion worth of damage. More than one in ten of those gallons came from ETP.

“That’s a red flag for a company that has an extensive network across the country and is building even more pipelines as we speak in Louisiana, Pennsylvania, and other states,” said Greenpeace USA research lead Tim Donaghy, PhD. “ETP and Sunoco's track record of spills, including several striking examples of big spills, are indicators of a constant threat to communities and water. This could happen again to communities along the pipeline routes.”

ETP spilled crude oil over 400 times, “refined petroleum products” such as gasoline 92 times, and other flammable or toxic fluids 27 times, the researchers found. And many of the spills involved large amounts of oil — roughly one in four of ETP's pipeline oil spills involved 2,100 or more gallons of oil.

In one 2005 incident, 436,000 gallons of crude oil spewed from a tank farm into a Delaware River tributary outside Philadelphia. That same year, a pipeline built in the 1950s dumped enough oil into the Kentucky and Ohio river to leave a 17-mile oil slick. And in 2009, a Texas pipeline caught fire and leaked over 140,000 gallons near Colorado City, Texas.

Cleaning up those sorts of spills is no easy job. Out of 3.6 million gallons ETP spilled, almost half — a total of more than 1.5 million gallons — was never mopped up, the report found. In addition, the company caused $115 million in property damage, according to federal tallies.

Sunoco, which merged with ETP, is included in the report's analysis. In 2012, ETP first merged with Sunoco, formally absorbing pipeline-wing Sunoco Logistics Partners in 2017. The combined companies operate over 70,000 miles of U.S. pipes. That's “nearly long enough to encircle the earth three times,” the report notes.

The pipeline industry's record has grown worse over time, the report notes, reaching a peak of 454 spills in 2015 before dropping “slightly” to 404 in 2017.

The company's controversial pipeline construction projects across the U.S. include the Bayou Bridge pipeline that would tie in to the Dakota Access pipeline and carry oil from North Dakota's Bakken shale down to the Gulf of Mexico, the Mariner East 2 pipeline that will carry the plastic precursor ethane across Ohio and Pennsylvania to the Atlantic coast, and the 713-mile Rover pipeline, that will transport natural gas through Michigan, Ohio, West Virginia, and Pennsylvania, where millions of gallons of drilling fluid have spilled during construction.

The Bayou Bridge pipeline's route through wetlands and drinking water supplies for over 300,000 people has community and environmental advocates particularly concerned.

The new report warns that if ETP's track record remains unchanged, the Bayou Bridge pipeline will experience multiple spills of 2,100 gallons or more of hazardous materials after it's built. “Assuming the U.S. system-wide rate for significant crude oil spills of 0.001 per year per mile, we estimate that the Bayou Bridge Pipeline would suffer eight significant spills during a 50-year nominal lifetime,” the report concludes. Photographs of Bayou Bridge construction taken by photojournalist Julie Dermansky, who has reported on Bayou Bridge for DeSmog, are included in Greenpeace's report.

“We're not happy with Bayou Bridge because we know that Energy Transfer Partners is accident prone,” said Harry Joseph, a pastor from St. James, Louisiana, where the Bayou Bridge pipeline will terminate. “We fear that something will happen in St. James — it's just a matter of time because of ETP’s history. The company has had problems.”

Those fears will sound familiar to some Pennsylvanians living near the Mariner East 1 and 2 pipelines, where the new report tallied over a hundred “inadvertent releases” and accidents, some of which contaminated locals' water wells, polluted local trout streams, or even caused massive sinkholes to open up. One of those sinkholes erupted just 300 feet from railroad tracks where Amtrak trains and local commuter rail operates, prompting the state to issue an emergency shutdown.

Many living near Mariner East's path are concerned about the risk of more accidents. “This is an organic farm,” West Cornwall farmer Phil Stober told ABC News, “and if it damages our groundwater, what recourse do we have?”

“We all recall the Dakota Access pipeline construction process because of the inspiring resistance from Indigenous communities that wanted to protect their water,” said Greenpeace's Donaghy. “Those Water Protectors were right; that pipeline alone leaked four times in 2017.”

An additional three incidents along the full stretch of the Dakota Access-Energy Transfers Crude Oil pipeline were also reported to federal authorities, including a roughly 5,000 gallon oil spill in Tennessee.

Other ETP pipeline construction projects that have had a lower national profile also caused major spills. The Permian II Express pipeline dumped 361,200 gallons of crude near Sweetwater, Texas, in the largest pipeline leak of 2016.

Last August, ETP sued Greenpeace, BankTrack, and Earth First!, claiming that anti-pipeline advocates were engaged in racketeering against the firm and demanding $900 million in damages. Greenpeace is currently defending against those charges in court and argues that the case is what's known as a Strategic Lawsuit Against Public Participation, or SLAPP suit, aimed at silencing discussion of harms caused by ETP. (This month, a federal judge effectively dropped Earth First! from that lawsuit, following arguments that Earth First! is a philosophy and not actually an organization. ETP had attempted to hold a magazine called Earth First! Journal liable as representing Earth First!) The lawsuit against Greenpeace is still ongoing.