The “queen of the hill” rule and a discharge petition could force House votes on immigration. 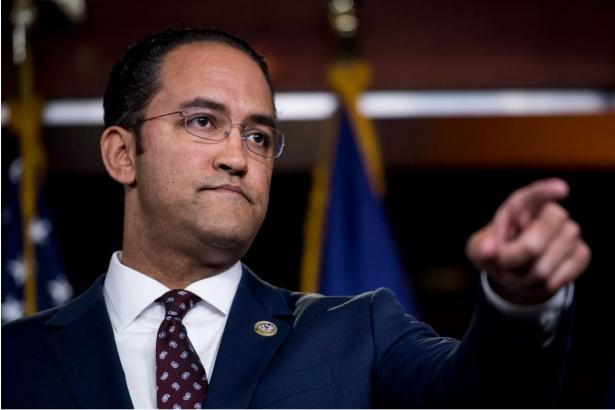 Rep. Will Hurd (R-TX) is one of the House Republicans trying to force Speaker Paul Ryan to hold floor votes on four immigration bills, Bill Clark/CQ-Roll Call,Inc. via Getty

The House of Representatives has so far avoided taking up any immigration bills to address the fate of the Deferred Action for Childhood Arrivals (DACA) program and the 690,000 or so young unauthorized immigrants facing the loss of their temporary deportation protections under it.

Some members are trying to force the issue. And they’re moderate Republicans.

On Wednesday, five House Republicans — Reps. Jeff Denham (CA), Carlos Curbelo (FL), Will Hurd (TX), David Valadao (CA), and Mario Diaz-Balart (FL) — introduced a discharge petition to force Speaker Paul Ryan to take up a series of immigration bills under an obscure provision called the “queen of the hill” rule. It’s probably not a coincidence that they’re some of the House’s most vulnerable Republicans in the November midterm elections (except for Diaz-Balart, a longtime Republican immigration reformer).

The “queen of the hill” plan, which was introduced in March as a nonbinding resolution, would force votes on four different immigration bills. Two of the bills the plan’s proponents (which include the Congressional Hispanic Caucus as well as the moderate Republicans) have in mind would give permanent legal status to DACA recipients; a third would be the conservative bill written by Rep. Bob Goodlatte (R-VA) that the conservative House Freedom Caucus has been pushing, which would grant temporary status to DACA recipients in exchange for deep cuts to legal immigration and beefed-up interior enforcement; and the fourth bill would be up to Ryan to decide.

Ryan (who has been squeamish, as speaker, on immigration and who is trying to look out for Kevin McCarthy, his anointed successor as speaker) didn’t show any interest in taking up the “queen of the hill” plan on his own. So now the moderate Republicans are trying to force him.

They need 219 signatures, which means they’d need to get not only every Democrat on board but also more than two dozen Republicans. But that might not be as much of a long shot as it seems. In March, the “queen of the hill” plan’s backers said they had 240 members in favor. The question now is whether enough of them are willing to not just say they support the plan but actually use some muscle to force Ryan to put it into action.

The “queen of the hill” rule: the bill that gets the most votes wins

When the Trump administration announced in September 2017 that it was winding down the DACA program, members of Congress from both parties leaped to promise that they’d pass a bill in the next six months to prevent the immigrants protected by the program from losing their work permits and deportation protections en masse starting in early March.

But after it became clear that President Trump and the White House weren’t committed enough to a DACA deal to make any actual compromises — and after federal judgesstepped in to partially reopen the DACA program by allowing current recipients to apply for two-year extensions while lawsuits over the program’s future make their way through the courts — most Republicans lost appetite.

The Senate held a cursory debate on immigration in February but couldn’t get 60 votes to break a filibuster on any bill (though the bill Trump supported did get 60 “no” votes). The House never moved a bill at all.

House inaction frustrated Democrats and moderate Republicans — who were convinced the House had the votes to pass a bill to legalize DACA recipients — as well as Freedom Caucus members who backed the Goodlatte bill. (Ryan reportedly promised the Freedom Caucushe would bring Goodlatte’s bill to the floor but hasn’t done it yet, raising questions about whether he’s struggling to find the votes for it or just dragging his feet.)

The “queen of the hill” plan solves these problems. It would bring four bills, in a series, to the House floor for a vote, and whichever one got the biggest vote margin in favor would pass:

These bills are mutually exclusive. But because of the “queen of the hill” rule, members who supported more than one would be able to vote for more than one — because even if two bills got 218 or more votes, only one of them would actually be passed under the rule.

Normally, it’s up to the House Rules Committee (which attaches procedural rules to every bill that comes normally to the House floor) to decide when to use the “queen of the hill” rule. But Denham and company have proposed a resolution to use the rule on the four immigration bills — so if 218 members of the House voted in favor of the resolution, it would trigger the “queen of the hill” quartet. And they claim they have 218 votes and then some.

The discharge petition: the attempt to force Paul Ryan’s hand

It’s hard to get 240 members of the House to agree on anything, so if the Denham-CHC group had its math right in March, they already accomplished something impressive.

But just getting 240 people to say the “queen of the hill” plan was a good idea didn’t bring it any closer to the House floor. So now the moderate Republicans are escalating.

Members whose priorities are stuck in limbo often threaten to start a “discharge petition” to bypass the speaker and bring a bill to the floor. But few discharge petitions can get the 218 signatures needed.

If all 240 members who support the “queen of the hill” plan put their signatures where their mouths are, it actually would. The question is how many of them are willing to openly antagonize Ryan by doing it.

Denham, Valadao, Curbelo, and Hurd are in a tricky position in 2018. They’re moderates in purple (and diversifying) districts. Their ability to hang on to their seats depends on the ability to both distance themselves from Trump and make voters feel that they’re getting something done that’s worth keeping them in office. Supporting a policy like the legalization of DREAMers does the first — but supporting a proposal that isn’t going anywhere doesn’t help with the second.

But there aren’t enough Republicans in that situation to make up the 26 signatures a discharge petition needs. And the rest of their caucus — including, notably, majority leader and anointed-Ryan successor Kevin McCarthy — has shown more interest in protecting their right flank on immigration than helping their vulnerable incumbents in purpling districts.

House Republicans who support a permanent solution for DACA recipients now face the choice of taking a stand and protecting their caucus’s vulnerability in one direction or remaining silent in the fear of protecting their party from right-wing anger — and themselves from retaliation by House leadership. The fate of DACA recipients might depend on which choice they make.