France Goes Off the Rails

The government’s proposed railway reforms will force yet more traffic onto the country’s overcrowded roads, even as people in the provinces and regions lose mobility, convenience, and time. 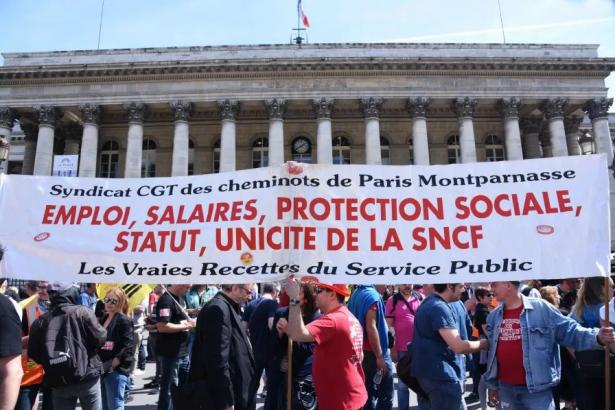 The French government, as part of its drive to shrink the public sector, is consulting with the national rail operator, SNCF (Société Nationale des Chemins de Fer), and rail unions on the reforms suggested in a report produced by Jean-Cyril Spinetta, the former boss of Air France–KLM. These include ending the privileged status of railway workers, reorganizing SNCF’s debt and making it a PLC (public limited company), increasing the spending on infrastructure, and closing underused lines.

The Spinetta Report asserts that minor railway lines have become too expensive to run. On the one I use most regularly, between Nancy and Saint-Dié-des-Vosges (one of the two sub-prefectures of the Vosges department), every effort has been made to cut costs. True, the rusty old graffiti-covered trains we were stuck with for years have been replaced with carriages made by Bombardier, which still feel new even if they look a bit cheap, with their plastic parts that rattle and armrests shared by two seats. Nevertheless, many off-peak rail services have been replaced by buses that cover the same distance in twice the time; also, ticket collectors have been removed from most trains, so if there’s a problem (which is often), you get no help. No information, no explanation—you get there when you get there. And the delays can be long. In the past, repair crews used to start work immediately; now you have to wait patiently on the train while the decision is referred to SNCF management and the regional government footing the bill.

SNCF no longer bothers to coordinate branch-line services with its high-speed TGV network, so if your train is late and you miss your connection, then it’s your hard luck. In this age of connectivity, the railways have forgotten the meaning of connections. Perhaps that’s why the ads on trains are at pains to remind us that we’re not users of a nationwide service but customers of different brands. The ultra-modern TGV brand is in a different world from the dilapidated Intercités (the non-high-speed regional services), with emergency track repairs constantly forcing the Intercités trains to run slow, and engine breakdowns making departures uncertain. Even so, the old Corail express trains now used by Intercités are valiantly holding on despite their pitiful state, making us long for a not-so-distant past when the trains were roomier and a fast, convenient, comfortable way to travel, even in standard class.

Some Intercités lines, especially the less profitable cross-country routes, are now threatened, a surprising development in an age of decentralization. To travel from Lyon to Bordeaux, you’ll soon have to pass through Paris. But the reforms are especially aimed at the Regional Express Train (TER) brand offering low-cost local transport, which SNCF thinks is a burden and would like to drop (a none-too-surprising development given that service reductions have led many users to switch to road transport). The Spinetta Report declares that even the reduced services on minor lines cost too much, and so sacrifices will have to be made.

There’s a major contradiction in the reasoning behind the proposed reforms. For 20 years, France’s politicians, with unanimous support from the media, have assured us of their commitment to protecting the environment and their belief in sustainable development. From the Grenelle round table (launched in 2007 to discuss public policy on ecological and sustainable development) to the Paris climate-change conference (COP21), they have dutifully backed recommendations to prioritize railway transport over road transport, ensure nationwide coverage, and develop rail freight to curb the number of 18-wheelers on the roads.

Yet over this same period, the rail network has been headed in the opposite direction, as if these virtuous proclamations were incompatible with business economics. Despite talk of the need for environmentally responsible transport, SNCF has been allowed to prepare for competition and act like a business in a hurry to cut costs, even if that means shutting down the lines that ensure nationwide coverage.

To demonstrate his awareness of climate change, President Emmanuel Macron has made the environmental activist Nicolas Hulot ecology minister. But just two years ago, Macron—then François Hollande’s economic minister—seemed unaware of the advantages of rail transport when he deregulated buses, further undermining the secondary rail network. The media, usually so conscious of environmental issues, saw this as merely a measure to boost employment and promote lower prices. Ads tout rail transport as more comfortable, pleasant, and punctual and as less polluting—yet SNCF’s chairman, Guillaume Pépy, told Le Figaro in July 2013 that he likes to give airline tickets as a gift.

The decision to commission a report from Spinetta on the future of rail transport is the logical extension of a change that began in the 1980s, when SNCF adopted the Socrate automated-ticketing system, purchased from American Airlines, as the basis for developing the TGV brand. Since then, SNCF has adopted more airline practices, including compulsory reservations and ticket prices that vary according to demand. This is the opposite of the old concept of a regular, accessible system with a single pricing scale based on distance, reflecting the universal nature of the service. There are also new security measures, with identity checks as you board some trains; baggage charges may be next.

Another new development is the construction of huge, airport-style out-of-town stations surrounded by car parks, such as the TGV station at Aix-en-Provence. These are not linked to the secondary rail network, so passengers have to travel on to their final destination by bus or car, on crowded and polluted access roads. Trains have become terrestrial airplanes, linking a small number of major population centers. Yet the authorities still talk of public service, sustainable development, and opening up the provinces.

In a society where so many models are imported, consciously or not, from the United States, this looks like another example of an American approach applied to Europe. In the United States, the great distances between major population centers can, at a stretch, justify providing only a few major air or rail routes, complemented by buses and car-rental services. But in Europe, the shorter travel distances and the density of the 19th-century rail networks require a different concept of public transport, based on proximity, regularity, and ease of access.

The Spinetta Report considers this model necessary for the major cities—which implies a lot of catching up after years of neglect of the suburban rail network—but not for most of the rest of France. It defines railways as mass transport, subject to the laws of just-in-time supply and maximum-capacity utilization, and proposes discontinuing many cross-country routes on the grounds that trains are not full enough, and that non-electrified lines are as polluting as buses.

However, buses are slower and less punctual than trains, and they worsen traffic congestion as well as pollution. Trains are fast and reliable, and they provide an environment that allows travelers to work, eat, stretch their legs, or rest during the journey, without enduring the discomfort caused by bends in the road or gear changes. They allow high-school students to travel to school (there are many on the line through the Vosges mountains between Saint-Dié and Sélestat, a route that is surely under threat). And if the network provides proper coverage and is sufficiently well served, not just at peak times, people can do without a car—a benefit in an age that is officially anxious to reduce road traffic. These advantages make the train the ultimate civilized means of transport, not an anachronism subject only to considerations of profitability.

At every big environmental event, politicians apparently concerned for the future of humanity promise to prioritize rail. But their desire to extend European and global trade norms goes against this. The free market, putting profit above all else, is fundamentally incompatible with the provision of a public service ensuring high-quality nationwide coverage and financed by the community, whether it is railways or hospitals. To overcome this contradiction, politicians resort to the word “also”—protecting the planet and also developing bus services; developing public transport and also submitting to the requirements of profitability; pursuing the grand missions announced by the government and also leaving these services to regional authorities and the whims of their leaders.

Even the environmentalists, who should be showing the way forward, focus on a few symbolic struggles—nuclear power, genetically modified foods, traffic congestion in Paris—and seem to have nothing to say about rail transport. Prime Minister Edouard Philippe’s stated aim of discussing each case on its merits while not abandoning France’s regions seems unlikely to halt the decline of rail service. (People in Le Havre, where Philippe was mayor from 2010 to 2017, know this well, as rail links there have deteriorated over the past 20 years.) This decline has forced many rail users to take to their cars, worsening the fall in passenger numbers that allows critics to claim that a line has outlived its usefulness.

A show of real political will could inspire other changes: maintaining and encouraging short-distance rail transport that is accessible nationwide without a reservation, and developing rail freight, as in Switzerland. France’s political leaders, so quick to invoke foreign models—especially German—when reducing welfare payments, don’t seem to have noticed that the German rail company Deutsche Bahn is taking the opposite approach: modernizing its rail network, closing its bus-service subsidiary so as to refocus on trains, and relaunching its rail-freight operations.

At Saint-Dié, the once-thriving warehouses have been abandoned, and the station buffet closed long ago. The buses that have replaced trains pick up passengers outside the station before joining the slow-moving stream of cars and trucks, and travel time between Saint-Dié and neighboring cities has actually increased. France’s leaders and even SNCF seem to have decided long ago that they preferred the disadvantages of road transport to the advantages of rail. The proposed reforms do not, as yet, suggest that they have changed their minds.