The Professional Staff Congress/AFT is stepping up its campaign to demand $7,000 per course for Adjuncts at CUNY. 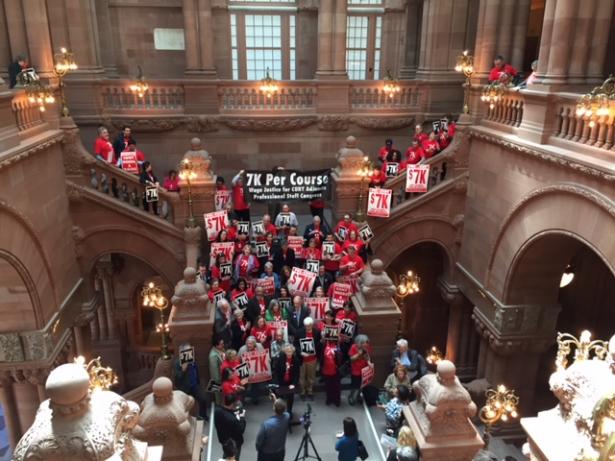 After lobbying visits, the PSC contingent rallies in the State Capitol Building , PSC

With the backdrop of teacher strikes in Arizona and Oklahoma and a graduate employee strike at Columbia University, the PSC is adding to the growing wave of education worker activism by demanding that CUNY adjuncts be paid $7,000 per course.

Nearly 100 PSC members, full-time faculty and staff, as well as adjunct instructors, arrived in Albany on April 24 to educate state legislators about the urgency of ending low pay for CUNY adjuncts and ask for their support for providing the funding required for the critical collective bargaining demand. Adjuncts at CUNY, who teach more than half of the university’s courses, work for near-poverty wages, the union told lawmakers. With starting pay for a three-credit course at a little more than $3,000, CUNY adjuncts are paid less than adjuncts at nearby peer institutions such as Rutgers and Penn State. The result is an unbearable amount of stress and hardship for union members and harm to students’ learning conditions.

May Eng, an adjunct teaching mathematics at LaGuardia Community College and the Borough of Manhattan Community College, delivered an emotional account of the poverty she and her colleagues endure at a meeting with representatives of State Senator Jose Peralta.

“I am embarrassed and ashamed to admit that I visit the food pantry quite often, and whatever I don’t use, I pass on to the other adjuncts,” she said. “And I have to wonder, ‘Is this really a way of life?’”

Susan Fountain, an adjunct professor of human relations at the School of Professional Studies, said that one of the best parts of her day was teaching older adults who might not have had the chance to complete a degree when they were younger. Many of the people in her classes, however, are city employees and other union workers, and a pain settles in when she realizes that though she’s the teacher, she’s usually the lowest paid person in the room.

“I can forget about that when I’m teaching,” Fountain said. “But it’s hard to forget when the class ends.”

Elise Engler, who teaches early childhood education at City College, noted that the entire concept of paying adjuncts by the number of hours they teach betrays the true nature of college teaching, which is really an all-day job, in which the instructor must answer student emails, write recommendations and grade papers. When one factors in all the work an adjunct lecturer does outside the classroom, the current per-course pay rate is barely minimum wage, she said, and certainly not a living wage. “A lot of the job becomes volunteer work,” said Engler.

Full-time faculty and staff members also pressed lawmakers, saying the crisis of pay for adjuncts wasn’t simply a disservice to part-time instructors or their students, but to the entire institution.

John Gallagher, director of information resources and technology at BMCC, in a meeting with representatives of State Senate Higher Education Committee Chair Kenneth LaValle, said that specialty schools at CUNY had significant trouble attracting professionals in relevant fields because of the low adjunct pay at CUNY. Susan Kang, an associate professor of political science at John Jay College, noted that it was also hard to attract new talent for the school’s program in human rights. This trend, she said, was keeping CUNY back from becoming a world-class university, keeping it behind universities like Columbia and NYU, which pay part-time instructors far more than CUNY does.

PSC activists also rallied for $7K on the “million-dollar staircase” at the state capitol building.

“None of us should ever have to make this choice, ‘Can I show up for my students when they most need me or do I have to run to a second or even a third job?’ It’s absolutely an injustice that this is a choice we would have to make,” said Carly Smith, the PSC adjunct liaison at Baruch College, during the rally. “We’re here to stand up and say, ‘Enough. We need economic justice. We need educational justice and it’s long past time that we achieve this.’”

The demand for $7K was formally entered into the union’s contract demands last year, but the PSC has pressed for parity pay and benefits for adjuncts since 2000. The union has achieved the goal of winning health insurance for adjuncts and graduate employees, has negotiated for conversion of hundreds of part-time positions to full-time positions and recently won three-year appointments for long-serving adjuncts, but the most difficult change to make has been in salary.

“CUNY survives deliberate underfunding largely because it relies on low-wage workers to teach the majority of its courses,” said PSC President Barbara Bowen. “That is a scandal and a slap in the face to every CUNY student. It’s time for a revolution in CUNY adjunct pay.”

The dollar figure of $7,000 per course isn’t a random one – it is approximately the per-course equivalent for an adjunct lecturer of a starting full-time lecturer.

PSC officials and members said they were inspired by their meetings with lawmakers, although with the budget already settled, many agreed that this would be the first among many trips and demonstrations to force Albany to provide the funding necessary to support this demand in full in the next contract settlement. The demand already has the support of many key lawmakers, including the chair of the State Assembly’s Higher Education Committee, Deborah Glick.

“It is crucial that we ensure that our adjunct professors receive a living wage. It is wrong for students to have highly qualified teachers who cannot stay for an extra hour or half hour because they have to run to catch a bus or catch the subway to get to another campus in order to teach another course because they aren’t getting paid a decent wage at each of those colleges,” Glick said during the rally. “The state needs to invest more in our public systems.”

State Senator Marisol Alcantara offered support to fight for $7K, adding that she felt there was a historic imbalance between higher state funding for institutions like SUNY-Stony Brook and underfunding at places like CUNY, where a majority of students are from the working class and are people of color. Raising adjunct salaries, she said, through funding $7K, was a part of addressing that classist and racist imbalance.

“Count me as your partner,” she told PSC members at the rally.

PSC’s First Vice President Mike Fabricant drove the point home in a message to all state lawmakers: “You champion this campaign, you are challenging inequality in New York City.”