Internal documents obtained by the Guardian reveal a nationwide drive to persuade union members to quit and stop paying dues.

May 16, 2018 Ed Pilkington The Guardian
Printer friendly
How Rightwing Groups Wield Secret 'Toolkit' to Plot Against U.S. Unions Published May 16, 2018 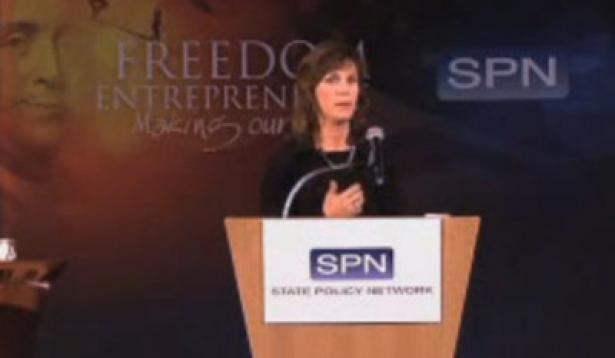 Tracie Sharp, president and CEO of the State Policy Network, says SPN wants to "defund and defang" public employees unions, thereby delivering “a major blow to the left’s ability to control government at the state and national levels." ,PR Watch

Rightwing activists are launching a nationwide drive to persuade public-sector trade union members to tear up their membership cards and stop paying dues, posing a direct threat to the progressive movement in America.

Documents obtained by the Guardian reveal that a network of radical conservative thinktanks spanning all 50 states is planning direct marketing campaigns targeted personally at union members to encourage them to quit. The secret push, the group hopes, could cost unions up to a fifth of their 7 million members, lead to the loss of millions of dollars in income and undermine a cornerstone of US progressive politics.

“Well run opt-out campaigns can cause public-sector unions to experience 5 to 20% declines in membership, costing hundreds of thousands or even millions of dollars in dues money. This can affect the resources and attention available for union leaders to devote to political action campaigns,” the internal documents say.

The anti-union marketing drive is the brainchild of the State Policy Network (SPN), a coast-to-coast alliance of 66 rightwing think tanks that has an $80m war chest to promote Donald Trump-friendly regressive policies such as low taxes and small government. The group is funded by such billionaire conservative donors as the Koch brothers and the Walton Family Foundation that stems from the Walmart fortune.

Previous SPN literature exposed by the Guardian has revealed the political motives behind the network’s attacks on unions. It aims to “defund and defang” public sector unions as a means to “reverse the failed policies of the American left”.

The goal, the group said, was “permanently depriving the left from access to millions of dollars in dues extracted from unwilling union members every election cycle”.

The Guardian has now obtained what SPN is calling a “toolkit” of advice to its followers on how to go about fomenting “union reform” – a euphemism for draining unions of members and cash. The “toolkit” sets out four “tactics” for depleting their power – “effective union reform”, in its language.

One of those tactics is the opt-out campaign.

“To get employees to opt-out of their union,” the documents say, “they first need to know they have a choice. A direct marketing campaign to union represented public employees that combines mail and digital outreach helps raise awareness and raise opt-out rates.”

The SPN blueprint sets out how to acquire the private details of union members through state freedom of information laws so that opt-out propaganda can be targeted directly at them. It says: “Access to lists of union members is essential to this project. The most common means of obtaining lists is through requests made under state public records laws.”

The toolkit is being circulated at a vital moment for public sector trade unions. The wave of school teachers’ strikes in West Virginia, Oklahoma, Kentucky, Arizona, Colorado and elsewhere has reinvigorated the labor movement as a key part of the resistance to stagnating wages, waning resources and a hostile White House.

More perilously, the US supreme court is poised to deliver its ruling any day in Janus v AFSCME, one of the most important trade union cases in recent times. If the five conservative justices on the highest court vote in favor of the anti-union plaintiff, as many expect, they would deal a severe blow to organized labor by giving employees the right to opt-out of paying their share of the costs of collective bargaining even though they benefit from negotiated higher wages and improved conditions.

That in turn would give the green light to conservative groups like SPN to step up their efforts to encourage mass resignations of union members. As a clear statement of intent, SPN invited Mark Janus, a child support worker in Illinois who is the named plaintiff at the center of the supreme court case, to speak at its annual meeting in San Antonio, Texas, last August.

Carrie Conko, SPN’s vice president of communications, said that “workers should be able to decide for themselves if payment of union dues and fees is a good use of their hard-earned money or if their money is better spent elsewhere”. SPN’s aim was not political, rather it was “simply about protecting free speech”.

Public-sector unions had created a problem for themselves, Conko said, by leaving some workers to feel they were being used. The Janus case might actually help government unions improve their standing with members as “they will need to prove their worth by providing better representation to earn the voluntary dues”.

Randi Weingarten, president of the American Federation of Teachers, said the Guardian documents revealed the extent of secret planning by rightwing groups in advance of the supreme court’s Janus ruling. “These documents make clear that Janus v AFSCME is not a case brought by individuals trying to have a voice, it’s a case brought by wealthy forces to eliminate worker voice and power.”

She added that rightwing billionaires such as the Kochs “know working families only have power through their unity as a union, and they will stop at nothing to destroy that. But we have seen unprecedented support for our unions and the opportunities they enable for a better life – when the Janus decision day comes, we will stand united, ready to act and fight back against the forces that want to silence workers.”

One of the SPN thinktanks, the Freedom Foundation in Olympia, Washington state, has already begun campaigning and fundraising on the back of a Janus ruling that goes against the unions. It has been mailing out to supporters in which it says “we are gearing up in a major way to launch an extensive education and activation campaign to take full advantage of a favorable ruling in this historic case”.

The foundation goes on to say: “The consequences of a favorable ruling are huge. Imagine tens, even hundreds, of millions of dollars currently used to push damaging leftwing causes and candidates … vanishing.”

In 2016 the Freedom Foundation ran a brazen campaign in Washington and Oregon in which it went knocking on the doors of more than 10,000 childcare and home care workers telling them that under a previous US supreme court ruling they could opt out of paying union dues. In the document obtained by the Guardian, SPN boasts that the foundation’s operation cost the Service Employees International Union (SEIU) in those states $8.8m in lost dues and legal fees.