How to Protect a Renter Nation

Laws that help renters are based on the belief that housing is a right for all, not just for those who own homes.

May 22, 2018 Deonna Anderson Yes! Magazine
Printer friendly
How to Protect a Renter Nation Published May 22, 2018 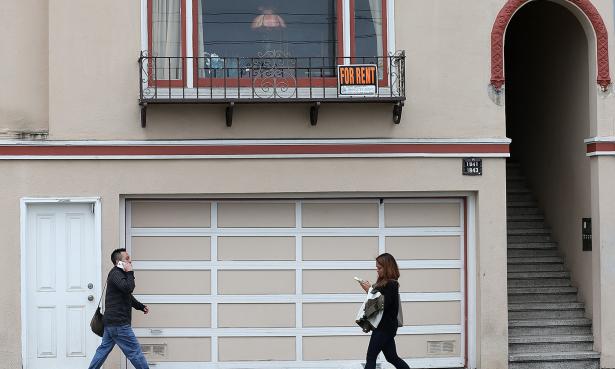 Nationwide, renters make up 51 percent of the population of the 100 largest U.S. cities.  , Justin Sullivan/Getty Images.

Sherri Eddings and her daughter live in South Los Angeles. They’re tenants in a home owned by Invitation Homes, a company that owns and manages more than 12,000 single-family homes in California.

Eddings has lived in her home since 2013, originally paying $1,800 a month. She says that every two years, her landlord has tried to raise her rent by $500, but she was able to negotiate a $200 increase over two years.

However, this year she received a letter saying that her rent would go up in the summer. She pushed back as she’d previously done, but come July, she’ll have to pay $2,235 (her landlord also tacked on an extra $35 for her dog).

“It’s just many reasons why people are homeless. Coming up with rent on time when your rent is increasing and no one is giving you that opportunity to work with you, then you end up out on the street,” she says. “What if Invitation Homes would’ve told me, ‘No, your rent is increasing by $500’? I wouldn’t have been able to do that. I would’ve been another one out there looking for something else, and who’s to say I would’ve found it?”

Some don’t feel like they have the agency to push back like Eddings did. Those people either become more rent-burdened—meaning they spend more than 30 percent of their income on housing—or pushed out of their homes.

While negotiating her rent increase, Eddings received a postcard from Alliance of Californians for Community Empowerment Action, a nonprofit working to repeal the Costa Hawkins Housing Act, a 1995 law that prevents California cities from establishing new rent control ordinances. Cities that already had some form of rent control policy, such as Los Angeles’ Rent Stabilization Ordinance, can’t expand it, and cities without a policy—all but 15 cities statewide—have their hands tied, and their renters don’t have many protections.

“The repeal would simply give cities more tools to address the housing crisis,” says Tony Roshan Samara, program director of land use and housing at Urban Habitat, a San Francisco Bay Area-based organization that seeks to advance equitable policies and democratize power.

About 20 miles south of where Eddings lives, the Long Beach Gray Panthers, along with the nonprofit Housing Long Beach, are co-sponsoring a ballot initiative to bring rent control to the city. The proposed ordinance also would set maximum rents on rent-controlled units and establish a rent board that would review increases, and also implement a just-cause eviction policy, so that landlords could only evict tenants if they don’t pay rent, breach the lease, or prevent the landlord from accessing the property.

“It’s almost as if the city wants to build new housing for higher-income earners, bring those people in, and push the existing community out. If that’s not what they want to do, then they could’ve fooled me, because that’s what’s happening,” says Josh Butler, the executive director of Housing Long Beach.

Between 2000 and 2015, the median rent in Long Beach increased 22 percent, according to PolicyLink, a research and advocacy institute. Renters make up about 58 percent of households in Long Beach and more than half of those are rent-burdened. Nationwide, renters make up 51 percent of the population of the 100 largest U.S. cities.

This resurgence to establish rent control policies is part of a statewide—and national—movement for tenants’ rights. This specific policy is just one part of a larger effort by people and organizations who believe that housing is a human right and that it shouldn’t only be a sure thing for those with a lot of money.

“When I think about what we really need, it’s not surprising that renters are pressing for change and it’s not surprising that high rents and sometimes shocking levels of rent increases lead to a call specifically for rent control,” says Maya Brennan, senior policy associate in the Research to Action Lab at the Urban Institute. “If a city were to enact rent control or rent regulations, I would strongly encourage them to be done with some sort of pilot. If possible, adoption of a policy should be based on research from other jurisdictions with similar conditions,” she says.

In 2017, Homes for All, a national campaign launched by Right to the City Alliance, a network of racial, economic, and environmental justice organizations, held a “Renter Week of Action.” Among other items, it advocated for tenants’ rights to organize and bargain collectively, to establish community control over land and housing through land trusts, cooperatives, and non-market solutions for affordable homes, and to support increased funding for the U.S. Department of Housing and Urban Development so that everyone who qualifies for assistance can get it.

The fight for housing rights is steeped in history that has affected people differently based on their class and race. It’s important to understand that tenants’ rights is not a small, niche issue, Urban Habitat’s Samara says.

Santa Monica and Berkeley were two of the first California cities to implement rent control ordinances, in 1979 and 1980, respectively. Throughout the 1970s and ’80s, cities across the state implemented their own rent cap policies, and 15 cities in California now have rent control.

In New York City, there are a small number of rent-controlled units. There’s also a rent stabilization policy, affecting many buildings built before 1974, which limits rent increases. That affects many more buildings than are covered by the city’s older rent control policy. As of 2014, the city’s Department of Housing Preservation and Development estimated that there were 27,000 rent-controlled apartments in the city, or about 1.2 percent of the housing stock, which is down from 2 million units in the 1950s. The department estimated there also were about 1 million rent-stabilized units in 2014. When the state began overseeing rent control in the 1950s, it passed several decontrol laws.

Boston and two nearby Massachusetts cities had rent control for almost 30 years, and it was often met with hostility from landlords. In 1994, Massachusetts voters decided to eliminate rent control by referendum. Most established protections eventually ran out in 1997, The Economist reported, and a year later eviction complaints and the number of people on waiting lists for public housing increased.

As one way of incorporating landlords’ interests into a new housing policy, Urban Habitat advocates legislation that would exempt new construction from rent control, as previous ordinances have done, with the “new” designation removed after some time, allowing rent control to take effect.

Tenants’ rights advocates suggest this approach could help ensure a good supply of affordable housing and that market-rate units become more affordable as they age.

Over the years, economists and those who oppose rent control have suggested the policy creates more problems than it solves, and that while it might be effective in a crisis, it should only be used as a last resort to combat rising rents.

“The other thing about rent control, besides it never building one unit, [is that] you do create this new bureaucracy, and the concern that I have is if people pass rent control, they think they solve the housing problem,” says Tom Bannon, CEO of the California Apartment Association, which sponsored Costa Hawkins when it was first introduced. “And one, it’s counterproductive, but two, they kind of take their eye off really the need to build housing as fast as we can build it because that way everybody gets housed.”

Urban Habitat’s study of the effects of rent control on housing development suggests that it doesn’t function as a significant barrier to development. In the cities of Berkeley and Los Angeles, there are significant numbers of new homes in development, and a slowdown in Santa Monica appears to be driven more by zoning and approval processes than rent control.

That information has been slow to percolate out to counter misinformation that undermines the drive toward rent control. That leaves many renters at the mercy of their landlords until the law gets changed.

Advocates also say they understand that rent control is not a fix-all for the housing crisis.

Get the new Issue of Yes! the Affordable Housing Issue