We Could Not Do Otherwise

"Our apologies, good friends, for the fracture of good order, the burning of paper instead of children, the angering of the orderlies in the front parlor of the charnel house. We could not, so help us God, do otherwise.” -- Remembering the Catonsville 9. 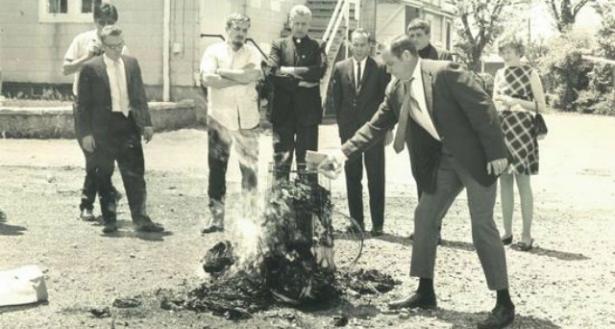 A long yet woefully reiterative 50 years later, we pay tribute to the indefatigable Berrigan Brothers and the seven other activists of the Catonsville Nine, who helped galvanize national outrage against the Vietnam War by burning draft records with homemade napalm - gasoline and Ivory Flakes - and then did their time, serene in the knowledge they were right. Their action on May 17, 1968 at the Catonsville, Maryland draft board is well documented. After weeks of planning, including scouting under the guise of browsing wedding venues, the nine - Daniel and Philip Berrigan in their priests' collars, David Darst, John Hogan, Tom Lewis, Marjorie Bradford Melville, Thomas Melville, George Mische, and Mary Moylan - drove to the draft board; Daniel reportedly calmed his cohorts by declaring, "It's a beautiful day, and we're going to a picnic."

There, they entered, collected 378 draft files into wire baskets, dumped them in the parking lot, set them on fire, and recited the Lord's Prayer while awaiting arrest. Most vitally, the action, like all that followed, had to be non-violent. Later Daniel - Jesuit priest, devout pacifist, eloquent writer dubbed "Jesus as poet" by Kurt Vonnegut - famously proclaimed, “Our apologies, good friends, for the fracture of good order, the burning of paper instead of children, the angering of the orderlies in the front parlor of the charnel house. We could not, so help us God, do otherwise.” They were tried in federal court, convicted of destroying U.S. property and interfering with the draft, and sentenced to a total of 18 years jail. Philip served 2.5 years. Daniel went underground, ultimately doing two years; asked his plans in handcuffs after his arrest, he said, "Resistance!"

This month's 50th anniversary commemoration events - readings, films, speakers, a historical marker - celebrate not just a pivotal action against an immoral war, but its enduring legacy, born of the Berrigans' deep commitment, both political and spiritual, to activism. Daniel was teaching at Cornell - "It was the first time I had ever heard the Gospel preached as if it was actually meant to be acted upon," recalls one student - when Philip, then awaiting sentencing for pouring blood on draft records in an earlier protest, asked him to join the Catonsville action.

Remembrances of the trial often reflect its uncommonly religious tone: The daily, devoted protests; the nightly candlelight vigils at St. Ignatius Church; the defendants' persistent efforts to put the war on trial as a fundamental matter of personal conscience; the poignant declaration by John Hogan, who like all the others was exempt from the draft, "I just want people to live - that's all";  the moving account of Daniel's "most unusual colloquy" with the judge, who openly admired the defendants' "vocation," ending in the entire courtroom, many weeping, reciting the Lord's Prayer. The defendants, writes Philip's daughter Frida, were "nine people stepping out of comfort and into commission and conscience." And that was deeply felt.

Daniel's activism was "a way of survival...(telling) us our souls are our own," and his rage against war "was fueled by his undying hope, rooted in faith, that peace is possible." In the end, his mandate was clear. "Know where you stand," he said, "and stand there." He kept fighting, often nuclear weapons with the Plowshares Movement, until his death in 2016 at 94. Philip, ex-communicated for his marriage and fiercely radical views - he called his 1996 autobiography, "Fighting The Lamb's War: Skirmishes With The American Empire" - died in 2002 at 79, having spent a third of his last three decades behind bars. He, too, stayed upright.

Around 1997, I had the singular honor to interview him over several days as he languished in our local jail, awaiting trial along with several younger activists for vandalizing a guided-missile launcher with hammers and baby bottles filled with their blood. Then in his 70s, he was powerful and handsome, with a shock of white hair and a compelling enough presence the jail guards still called him, despite his ex-communication, "Father." He faced up to 15 years in jail; the judge had offered to release him if he'd agree to stay away from the shipyard, but he refused. So there he sat, tranquil yet impassioned in his orange jump suit. He was full of abiding faith, hope, rage, but I only remember him laughing once over those days. It was when I asked if and how, despite his arduous decades of fighting, he could feel at peace with the still-broken state of the world, if he could accept what he had and had not accomplished. He offered a small wry smile, then a deeply knowing laugh. And said, "I sleep at night." May he, and Daniel, and all the others, rest in peace and power.

[Abby Zimet has edited CD's Further column since 2008. A longtime, award-winning print journalist for newspapers and magazines, she lived in the Maine woods for about a dozen years before moving to Portland in 1983. Having come of political age during the Vietnam War, she has long been involved in women's, labor, anti-war, social justice and refugee rights issues.]

Independent journalism has become the last firewall against government and corporate lies. Yet, with frightening regularity, independent media sources are losing funding, closing down or being blacked out by Google and Facebook. Never before has independent media been more endangered. If you believe in Common Dreams, if you believe in people-powered independent media,please support us now and help us fight—with truths—against the lies that would smother our democracy. Please help keep Common Dreams alive and growing. Thank you. -- Craig Brown, Co-founder