The NFL’s “Take a Knee” Ban Is Flatly Illegal

There is a serious free speech problem with the owners’ rule. They believe that if they do not ban the protests, the president will continue to make the protests a national issue and damage the league’s income. 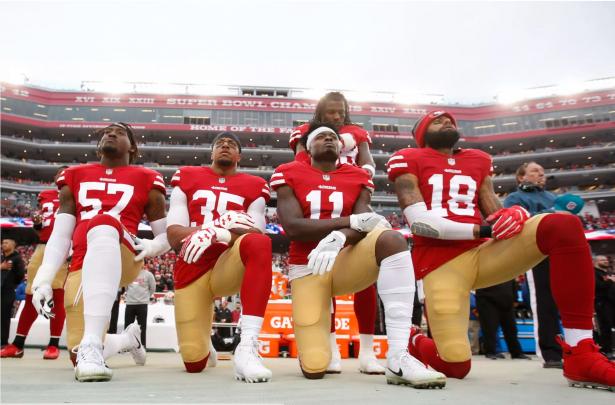 The owners did provide the players with an alternative, of sorts: If a player does not wish to stand and salute the flag, he can stay in the locker room and wait for the anthem to end. This new league policy is meant to enforce a particular vision of patriotism, one that involves compliance rather than freedom of expression.

The policy is also illegal — for a host of reasons.

The clearest illegality derives from the fact that the league adopted its new policy without bargaining with the players union. When employees, including football players, are represented by a union, the employer — including a football league — can’t change the terms of employment without discussing the change with the union. Doing so is a flagrant violation of the employer’s duty to bargain in good faith.

If, as the NFL Players Association says, the employer implemented this change on its own, the policy is flatly illegal for that reason and should be rescinded by the league.

Kneeling is also a workplace protest

But the new policy has other, deeper problems. Just this week, the Supreme Court issued a major decision that clarifies exactly why the players’ anthem protests are protected by our labor laws. In this decision, Epic Systems Corp v. Lewis, the Court concludes that the National Labor Relations Act is, at its core, designed to “protect things employees ‘just do’ for themselves in the course of exercising their right to free association in the workplace.” Put plainly, the Court holds that collective actions engaged in by employees at work are the heart of labor law’s concern.

In Epic, the Court uses this reasoning to hold that pursuing class-action arbitrations is not something labor law protects. Whether you accept that view or not — I do not — it is impossible to come up with a clearer example of something employees “just do for themselves” as a means of “exercising their right to free association in the workplace” than the anthem protests. They are a perfect example of the type of concerted activity that labor law is designed to protect.

Some might object that labor law does not protect these protests because they’re about something other than work: They’re about police brutality, or systemic racism, or the president’s view of what patriotism means. Of course, in some sense this is exactly what the protests are about. But in a more direct, literal sense, what the players are protesting is the requirement that they stand during the national anthem. That’s what the protest is: a refusal to stand.

Now that the owners have made it a workplace rule to stand during the anthem or stay in the locker room, any player who takes the field and takes a knee is protesting an employer rule. And that is unquestionably protected by federal labor law.

There is a potentially important caveat here, one that comes from a perverse and byzantine part of our labor law called the “partial strike” rule. A partial strike occurs when employees refuse to participate in only one workplace rule rather than ceasing to work entirely. Such strikes are not protected by the law.

This partial strike rule may mean that players who refuse to comply only with the anthem rule, but otherwise fulfill their obligations to the league, can be disciplined for doing so. The rule is perverse because any player who decided to protest the anthem rule by fully striking — not playing at all — would be protected.

In a perfect world, we would get rid of this silly doctrine, but until that happens, if the owners chose to enforce the partial strike rule, they might just be prodding the protesting players toward a complete strike.

Finally, there is a serious free speech problem with the owners’ rule. In general, the constitutional right to free speech applies only to censorship by government entities, not to what a private sector employer like the NFL does. But there are two reasons why the players have a viable free speech claim.

The first is that the president of the United States has been actively involved in the league’s decision-making process. In an earlier round of the protest dispute, President Trump called on the league to discipline Colin Kaepernick for his leadership of the anthem protests and threatened to use the tax code to punish the NFL if they allowed them to continue. Vice President Mike Pence walked out of a 49ers game where anthem protests were planned.

What’s more, the owners have made clear that their adoption of the new rule was made in response to presidential intervention: They believe that if they do not ban the protests, the president will continue to make the protests a national issue and thereby negatively affect the league’s income stream.

As Dallas Cowboys owner Jerry Jones told Sports Illustrated, Trump “certainly initiated some of the thinking, and was a part of the entire picture.” When the president and vice president of the United States are this intimately involved in encouraging a private employer to adopt a workplace rule, the Constitution should have something to say.

Applying the Constitution in this context is justified but would require judges to break some new legal ground. But even if the courts refuse to apply the Constitution directly here, the players ought to have at their disposal another powerful legal tool. The law of most states declares that employers may not fire, or otherwise discipline, employees for reasons that violate the state’s public policies.

That’s why, for example, employees cannot be fired for fulfilling jury duty, or for refusing to perjure themselves on the employer’s behalf. If an employee is disciplined for one of these reasons, he is entitled to sue the employer (through what’s called a public policy tort).

It is hard to imagine a public policy — in whatever state you choose — more important than the policy in favor of free speech on matters of public concern. Indeed, this public policy is enshrined in the constitution of every state in the nation. Given that freedom of speech is one of our most important public policies, courts should follow the lead of the famous Novosel decision, which held that an insurance company worker who declined to lobby legislators for a particular bill as the company had requested, and who stated his opposition to that bill, could not be dismissed.

The upshot of that decision is that an employer that disciplines an employee for engaging in peaceful speech has disciplined an employee in violation of public policy.

There would, of course, need to be limitations on this rule, and not everything an employee says regardless of context or form could be protected. But the NFL anthem protests are not a tough case. We have players engaged in fully peaceful speech acts, on a subject of core national importance, and in a context where they are literally debating with the president and vice president of the United States.

Given these facts, if the NFL takes action against the players, the league will violate public policy and should accordingly be vulnerable to legal action.

Benjamin Sachs is the Kestnbaum professor of labor and industry at Harvard Law School.

The Big Idea is Vox’s home for smart discussion of the most important issues and ideas in politics, science, and culture — typically by outside contributors. If you have an idea for a piece, pitch us at thebigidea@vox.com.