The ILRI’s African Chicken Genetic Gains project was funded by the Bill & Melinda Gates Foundation, as part of their mission to end world hunger. 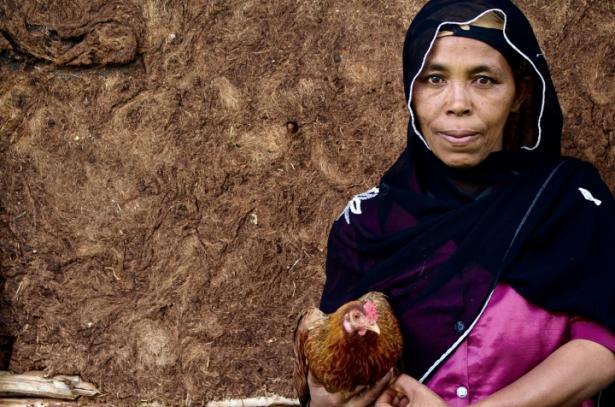 The ILRI has argued that chicken farming is a strong vehicle for small-scale entrepreneurship and female empowerment in Africa., ILRI

Koen Vanmechelen has spent the last 20 years developing a “Cosmopolitan Chicken,” and since 2016 has been involved in a project to breed more versatile poultry at a facility in Addis Ababa.

Very often, artists frame their roles in society in terms of reflecting upon issues, raising questions, or bringing ideas to light; it is left more to the mien of designers to play an active role in the physical shaping of progress. But the Belgian conceptual artist Koen Vanmechelen has spent the last 20 years making art out of animal husbandry, and his ongoing efforts to create a “Cosmopolitan Chicken” hit a milestone last month, with the opening of a new facility for breeding chickens in Addis Ababa, Ethiopia.

The project is a cross-functional collaboration between Vanmechelen and the International Livestock Research Institute, the governmental Ethiopian Institute of Agricultural Research, and the MOUTH Foundation. Its goal is to crossbreed a selected strain of African chicken, identified by the African Genetic Gains project (ACGC) with the artist’s Cosmopolitan Chicken (CCP), in order to produce the Ethiopian African Planetary Community Chicken (EAPCC). The project is called Incubated Worlds, and these EAPCC offspring will be distributed as a hardy livestock for the communities of the region.

Ethiopia is Africa’s second most populous country, and one of the region’s largest livestock centers, with rapidly rising demand for milk, meat, and eggs, for both local consumption and export. As foundations and scientists dedicated to improving the chances of successful livestock culture in Ethiopia researched genetic diversity, their paths crossed with Vanmechelen, who has dedicated the last two decades to developing a chicken with truly global genetic roots.

“I started to work in Ethiopia two years ago,” Vanmechelen said in a Skype interview with Hyperallergic, “when we started a foundation to collect the blood samples of all the chickens.” This work produced a genetic bible, visualizing the 13 million places where the genetic makeup of the Cosmopolitan Chicken differs from the reference chicken considered as standard. “This is a lot of diversity — that’s the key to resilient, fertile chickens, and that’s also the key to my work.”

Vanmechelen has been engaged in the process of traveling with his Cosmopolitan Chicken to cross-breed with local chickens for more than a decade — coming to Detroit in 2016 for one iteration of the work, hosted by Wasserman Projects, and donating the offspring to the Oakland Avenue Community Garden in Detroit’s North End.

The scope of Incubated Worlds is more ambitious. The original Ethiopian project was initiated by Ethiopian scientist Tadelle Dessie, one of the principal scientists at ILRI, who engaged also engaged Belgian scientist Olivier Hanotte. The ILRI’s African Chicken Genetic Gains project was funded by the Bill & Melinda Gates Foundation, as part of their mission to end world hunger. Dessie and his team felt that chickens have been an under-appreciated animal, both in terms of nutrition and for the empowerment of women. The ILRI made the decision to locate and import a chicken with superior or complementary genetic qualities to the local strain of Ethiopian chickens, and use cross-breeding to create a more resilient and versatile livestock for distribution in Tanzania, Nigeria, and Ethiopia.

“Now we are building a huge farm, and it is fantastic — I always said, the most sexy poultry facility in the world,” Vanmechelen said. “You can feel the energy and the happiness around poultry. I think there is a lot of hope inside this project.”

The facility intends to produce and distribute chickens to some 2,500 households in Ethiopia alone, mostly managed by women. It combines Vanmechelen’s art with several regional initiatives around nutrition, female entrepreneurship, and sustainable agriculture. Ethiopia has been attempting to address childhood stunting, which has been reduced by a third since 2010.

“This is a beautiful moment, that my work comes to be part of a huge project,” Vanmechelen added. “Different fields are coming together, different professions. I went to an exhibition when I was a young boy, titled Can Art Save the World? The conclusion was that art can inspire, or take steps to a better world. But when you can mesh with the same energy of people from other professions, I think there is a chance that it comes to something else.” It’s not only that, as an artist, Vanmechelen approaches this project armed with curiosity and metaphor, it’s that his efforts solve for different problems than industrialized animal husbandry, which is constantly seeking to breed for higher production, often leaving animals susceptible to disease or reliant on highly controlled environments.

“The reason that they are so interested in Koen’s chickens is that they have not been produced for productivity,” MOUTH Foundation Community Manager Petra Remans said in an interview with Hyperallergic. “The CCP have been built into a ‘treasure trove’ of such a broad variety of genomic data, they might well have a resilience against climate change, or unexpected diseases that has been lost in the scientific and commercial farming selection — not what we have planned for, but what we have not planned for.”

No one intends to count their chickens before they’ve hatched, but the first round of 200 hatchlings has already made it into the world, and all that remains to be seen is what kind of potential has incubated within them.