For NFL Players, Civil Disobedience Is the Only Option

Taking a knee is in the best American tradition of protest. 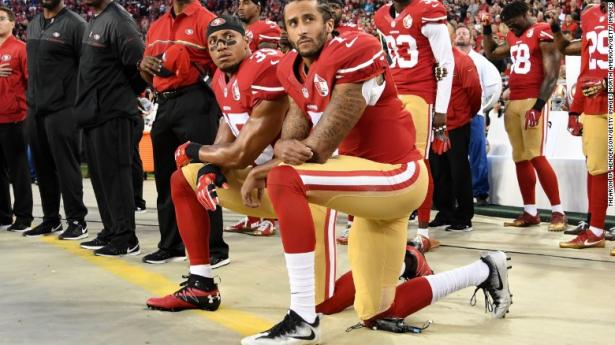 On Wednesday, the NFL owners capitulated to President Donald Trump by voting to require players to stand on the field for the national anthem. Teams will be subject to a fine if any player disobeys, according to NFL Commissioner Roger Goodell. The next day, Trump applauded the owners – his fellow plutocrats -- saying that they “did the right thing.” Players who refuse to stand for the anthem, Trump declared, “shouldn’t be in this country.”

In what the owners described as a “compromise,” the new policy gives players the option of remaining in the locker room during the “Star Spangled Banner.” Some players have discussed the idea of having entire teams stay in the locker rooms as a way to voice their frustration with the new mandate.

But what if at least five players on every NFL team defy the league’s new policy and take a knee during the National Anthem on opening day and in subsequent?

It could paralyze the NFL and reveal its weakness in the face of widespread civil disobedience by its players. It is unlikely that the NFL would not only fine the rebellious players but also impose fines on all 32 teams. Such an act of resistance would re-ignite the issue of the players’ right to express their views on the field. And perhaps remind us what the rebellion was about in the first place – racism.

This battle began in 2016 when San Francisco 49s quarterback Colin Kaepernick kneeled during the anthem before his team's preseason games to protest police brutality toward Black Americans. During that season, other NFL players followed Kaepernick’s example of silent protest. But their crusade widened after Trump launched an attack on the players’ protest during a political rally in Alabama in September of last year. “Wouldn’t you love to see one of these NFL owners, when somebody disrespects our flag, to say, ‘Get that son of a bitch off the field right now. Out! He’s fired. He’s fired!’” Trump bellowed. The next weekend, over 200 players sat or kneeled in defiance of Trump.

Trump doubled-down this week, in effect calling for the deportation of players who refuse to stand for the national anthem. His latest comments reflect a narrow view of patriotism -- “my country, right or wrong.”  It is similar to former President George W. Bush’s State of the Union in 2001, in which he discussed his war on terrorism soon after 9/11. “You’re either with us, or with the terrorists,” he said.

But there’s another view of patriotism that involves loyalty to a set of principles, and thus requires dissent and criticism when those in power violate those standards. Not “love it or leave it” but “love it and fix it.”

“The great glory of American democracy,” Rev. Martin Luther King proclaimed during the Montgomery bus boycott in 1955, “is the right to protest for right.”

In his famous 1963 “Letter From Birmingham Jail,” King wrote that to bring about needed change, it is often necessary to disobey immoral laws and defy unjust authority.

That’s what Kaepernick and other NFL players were doing when they refused to stand for the anthem.

Surely King would object to the NFL’s new policy. Giving players the choice to stay in the locker room during pregame ceremonies is like asking them to move to the back of the bus. It is separate, but not equal.

Hiding in locker rooms undermines the point of protest. Taking a knee on the field is a silent but visible statement of dissent. The NFL policy is designed to silence the players’ protest.

The NFL policy violates the players’ right to free speech. Some have argued that the First Amendment only prohibits the government – not private corporations like the NFL -- from restricting free speech. But if the government pressures employers to fire employees – as Trump has clearly done – that’s against the law. Trump not only urged the NFL to punish Kaepernick for initiating the protest but also threatened government action – deporting players who refuse to stand for the national anthem. To magnify his threat, Trump sent Vice President Mike Pence to a 49ers game so he could visibly walk out to show his opposition to the player protests.

And consider this: Although NFL teams are private companies, many of the stadiums – the players’ workplaces -- are owned by state or local governments. These are publicly-owned, taxpayer funded facilities – more evidence that the government is deeply involved in this issue.

And there is also the hypocrisy of having the U.S. government (through the Pentagon) pay the league to promote the military – including the expensive aircraft flying over stadiums during games – while prohibiting players from expressing their views on important public issues.

The NFL’s new gag rule also violates federal labor law. The National Labor Relations Act protects employees’ right to engage in any “concerted activities” to support each other in job-related matters. That means everything from using Twitter to complain about unsafe workplaces to holding press conferences to support political candidates or public policies that could improve their working conditions.

By taking a knee, NFL players were engaging in such concerted activities. They weren’t on strike. They weren’t refusing to work. By kneeling, they were standing up for players’ rights, expressing solidarity with each other.

Moreover, the NFL adopted the new policy without consulting the National Football League Players Association. Under the union contract, changes in workplace rules have to be negotiated between the union and the league. The union should sue the NFL for violating this longstanding labor-management agreement.

The controversy over the NFL’s new rule has diverted attention away from the core issue that sparked the protest in the first place. The players were seeking to heighten public concern over the epidemic of police mistreatment – and killing – of Black Americans. Of the 1,696 players on the NFL’s 32 teams, about 70 percent are African American. As Trump continues to stoke racial fears and bigotry, it is hardly surprising that many of these black athletes – along with some of their white and Latino supporters – feel the need to speak out.

The players should defy the NFL’s ploy to confine their dissent to the locker room. Since the Boston Tea Party, movements for change – including women’s rights, workers’ rights, and civil rights -- have been most successful when their protests were public and collective. When the NFL season opens in September, the players should defy the new policy and take a stand by taking a knee.

Peter Dreier is professor of politics at Occidental College and author of The 100 Greatest Americans of the 20th Century: A Social Justice Hall of Fame.

A version of this article first appeared on The American Prospect.