Ten years ago nearly 400 immigrant workers at a meatpacking plant in Postville Iowa were detained and subject to deportation. Trump, with bipartisan support, pardoned the plant's owner Sholom Rubashkin, who had been jailed for financial fraud. The victim's of the raid received no justice. 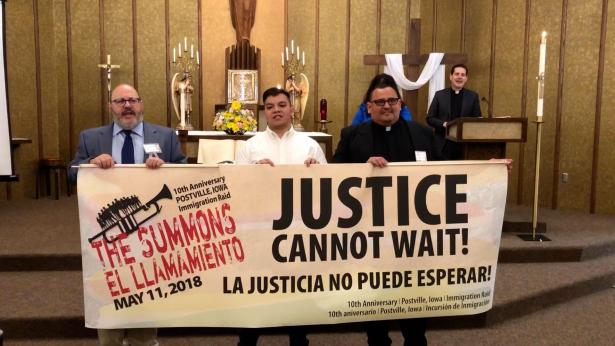 On May 15th, 2018, the Trump administration followed through on its promises to increase deportations as raids swept the Midwest.

Towns like Postville, Iowa give evidence to the destructive longstanding impacts of raids in rural communities. Recently, an interfaith service memorialized the 2008 raids that shook the community. For speakers and assembled guests, the memories of that day began with the sound of helicopters, which descended on the rural Iowa town of 2,200 to detain nearly 400 immigrant workers from the Agriprocessors meatpacking plant. Members of the Twin Cities-based non-profit advocacy organization Jewish Community Action (link is external)(JCA) bussed in to join the events and reflect on the 2008 raid with the assembled crowd.

A decade ago, JCA coordinated with the church in Postville, providing direct support and relief by raising money to help the workers and their families. JCA sent buses of their members down to Postville to march and rally in support of the detained workers. The organization then worked with the town to help create a community benefits agreement to protect against future violations. According to JCA, “the factory and town sat in an intersection of injustice for both workers and immigrants, all in the name of producing kosher food. A strong Jewish response was needed.”

At the time, Agriprocessors was the largest kosher meatpacking plant in the country. The New York Times(link is external) reported in 2008 that, “The Agriprocessors raid in May fueled a fundamental debate between the Orthodox and Conservative movements of Judaism. The Orthodox, who include the majority of Jews who keep kosher, adhere to a strict interpretation of Jewish law, while the Conservative movement has a more liberal interpretation emphasizing social justice. Among Conservative Jews, a minority observe kosher laws strictly.”

On December 20th, 2017 President Donald J Trump commuted the prison sentence of a former executive of Agriprocessors, Sholom Rubashkin. The statement explained(link is external) that,  “Mr. Rubashkin has now served more than 8 years of that sentence, which many have called excessive in light of its disparity with sentences imposed for similar crimes.” Rubashkin stands in interesting company. This is the second instance of Trump using his clemency powers since taking office; his first was pardoning former Arizona sheriff Joe Arpaio. The common denominator in both cases is the issue of immigration, which Trump had earlier vowed to enforce more aggressively.

Critics of the move have pointed to allegations from hundreds of undocumented immigrants that Rubashkin fostered a hostile workplace that included 12-hour shifts without overtime pay, exposure to dangerous chemicals, and sexual harassment. The slaughterhouse company had been investigated(link is external) for its alleged use of child workers and other labor violations, including physical abuse and sexual harassment.

The accusations and crimes surrounding the plant were featured in a Season 5 episode of American Greed(link is external).

Pedro Lopez's mother was arrested by ICE at the time for identity theft. Lopez was 13 years old. Nearly 20 percent of the town’s population was detained that day. They were rushed by bus to the National Cattle Congress, a facility normally used for cattle shows in nearby Waterloo.

“I grew up in the cornfields with my friends,” said Lopez, now a 23-year-old aspiring lawyer. “Having that wake-up call — ‘You are not from this country’ — and you get the call that your mom is deemed a criminal, it made me sad and angry. It made me feel alone and hopeless; just a shell.”

Following the raid, many newspapers reported that when confronted with such charges, most Agriprocessors workers agreed to plead guilty to lesser criminal charges and accepted shorter jail terms and immediate deportation. At a congressional hearing in June 2008, Erik Camayd-Freixa, a government-assigned interpreter in the Postville proceedings, testified that he did not believe that many of the workers arrested understood the charges brought against them.

Mother Jones(link is external) reports that the Judge in the original case is the subject of ongoing scrutiny. Overseeing the 2008 raid was Judge Linda R. Reade, the chief judge of the Northern District of Iowa. She defended the decision to turn the National Cattle Congress into a courthouse, saying the proceedings were fair and unhurried. The incident sparked allegations of prosecutorial and judicial misconduct and led to congressional hearings.

However, what took years to report on and investigate is that Judge Reade’s husband owned stock in two private prison companies, and he bought additional prison stock five days before the raid. Ethics experts contacted by Mother Jones say these investments were inappropriate and may have violated the Code of Conduct for United States Judges(link is external). Tracking each of the almost 400 detainees has proven to be difficult, but Sandra Sanchez, who directs an immigration advocacy program in Iowa, says family members of the immigrants told her that others were held in private prisons in Texas, Georgia, and California.

“Today, dozens of people who were sentenced by Reade while her husband owned prison stock remain behind bars." explains the article in Mother Jones. "According to the U.S. Sentencing Commission, the Northern District of Iowa, where Reade sits, sends a significantly higher proportion of defendants to prison, and with longer sentences, than the national average.”

While the Trump era has centered and legitimated the belief that immigration policy is broken and needs fixing, University of Minnesota Chicano Studies Professor Jimmy Patiño explains that this premise obscures a more nuanced reality. Referring to his 2017 book, Raza Sí, Migra No, Patiño states,

“An idea of the book that’s out there is to challenge this idea that the immigration system is broken. It’s not broken; it works exactly as it’s meant to work. It creates so-called illegal people to create a vulnerable workforce that businesses have been reliant on since the border patrol was created in the 1920s.”

The Postville raid brought attention to the deportation regime and how it supports the U.S. economy’s simultaneous dependence on and criminalization of immigrant workers. For the residents of Postville, healing from their scars remains an indelible part of the social fabric of the town.